6 days ago 0 5 min read
We use cookies to provide a personalized experience for our users. By continuing to browse this site, you give consent for cookies to be used.
Got it!
Home > Health > Seniors > Ethnocultural seniors want better resources to combat elder abuse 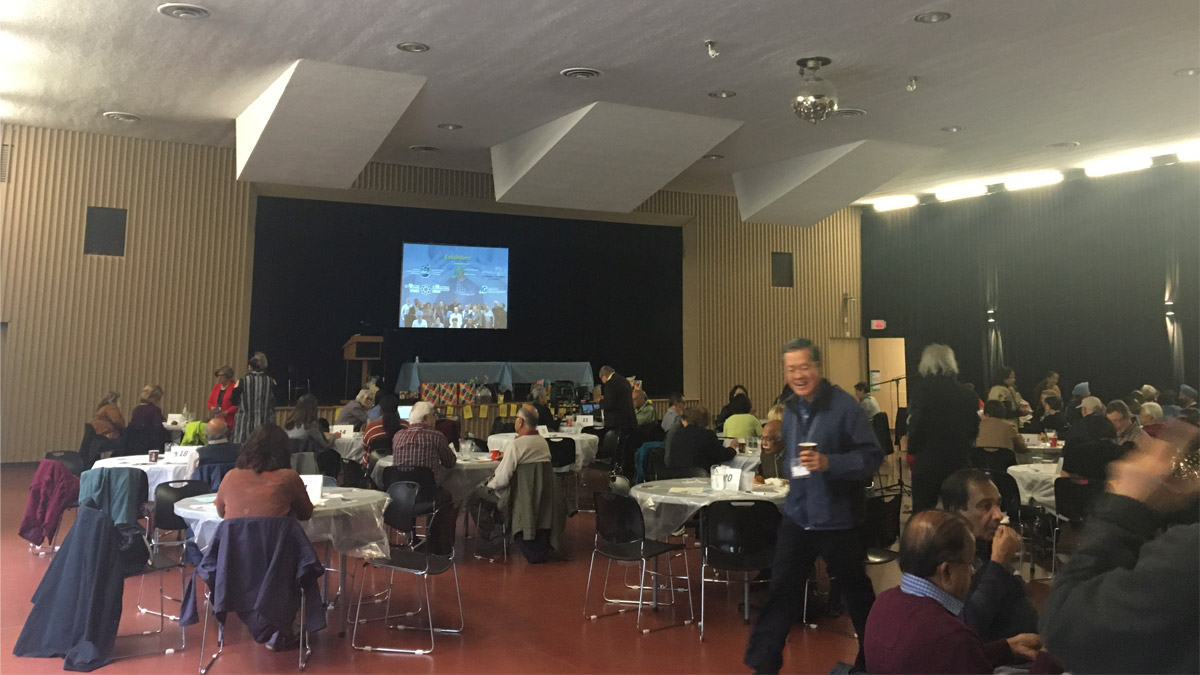 Seniors and others gather in the Ron Kolbus Centre recently to talk about elder abuse. [Photo @ Leah Coppella]
Community

According to the 2016 census, there are almost 80,000 immigrant seniors living in Ottawa. But while Canada’s population is aging and becoming increasingly multicultural, some Ottawa seniors say that the current resources and support on elder abuse are not enough, especially for those who come from different cultural backgrounds.

Nilambri Ghai, a senior from the Centrepointe area, told Capital Current that there are few resources for seniors in Ottawa, especially for the South Asian community.

This viewpoint is a major reason why the Social Planning Council of Ottawa and Ethno-Cultural Seniors of Ottawa held a discussion and forum on the importance of education on elder abuse in ethnocultural communities on Oct 16.

Konanur says that understanding what abuse is varies differently amongst ethnocultural groups. For example, constant yelling is not considered abuse by some of her racialized clients, but as a lawyer, she considers it as abuse.

Konanur says it is important to talk about these issues now, as the population of seniors will grow exponentially in coming decades.

“Seniors are some of the most brilliant communities in our population … and so we need to think about systemically about what we are doing right and what are the holes in what is going wrong.”

“We decided together with seniors that we needed to discuss how to define elder abuse that makes sense to those from different ethnocultural backgrounds, such as social and emotional abuse,” Braganza said. “Even spiritual abuse.”

Braganza says that engaging with seniors directly and listening to what they want is a crucial aspect of resisting elder abuse.

“The community has that cultural knowledge and those people that speak the language, and so we want to connect them with the city services so that they can all work together.”

Konanur agrees, saying that the best way to improve an elder’s life is to connect them with community.

“They’re searching for real-life support, someone who can tell them what bus route they can take to get to the local temple”.

Konanur says that she is also thinking a lot about how elder abuse will be affected by the upcoming federal election.

“A lot of the work in violence, particularly for older adults also intersects with income security, immigration security, and the ability to access services and police without fear,” Konanur says. “Those are all topics at the federal level that are within the sphere of the federal government to tackle … and they can certainly talk about doing better education across the country  around raising these issues in communities that haven’t traditionally talked about them”.

Councillor Theresa Kavanagh, Bay Ward, and Women and Gender Equity Liaison agrees that the election may play a role in the wellbeing of seniors, especially with the possibility of a minority government.

“Whenever you have a minority parliament, there’s more bargaining going on. When there’s a majority, they can do what’s on their agenda, but they’re not forced to. If it’s a minority … they have to take on the wishes of the smaller party, usually the NDP or other parties,” she says. “And then there is more pressure on them to do things, and this could be one of those things, putting more resources into seniors.”

She also says that “if another party gets in where there is no commitment at all, this is going to affect seniors and the programs for them.”

“We need to work in an intergenerational way,” Ghai, who attended the forum, said in an interview. “Many of our seniors do not speak English or French because they have come here often sponsored by their adult children. And they’re here doing very important work, such as looking after their grandchildren or helping with cooking and household chores, but then they don’t have any resources.”

Ghai said she wrote an essay on what growing old means to her, which she presented at the event. In it, she refers to herself as a living letter.

“I promise, each time you read me, you will find something new. And the best part of it is that I am still writing my stories and yours, “ she said reading part of her essay. “I need you just as much as you need me, for I am your future just as much as you are my past.

If you have questions about elder abuse, please contact the Ottawa Police Elder Abuse Information Line at 613-236-1222, ext. 2400. More information can be found here. For emergencies, call 9-1-1.