2 days ago 0 2 min read
We use cookies to provide a personalized experience for our users. By continuing to browse this site, you give consent for cookies to be used.
Got it!
Home > Sports > Ottawa Champions have new owners but no league 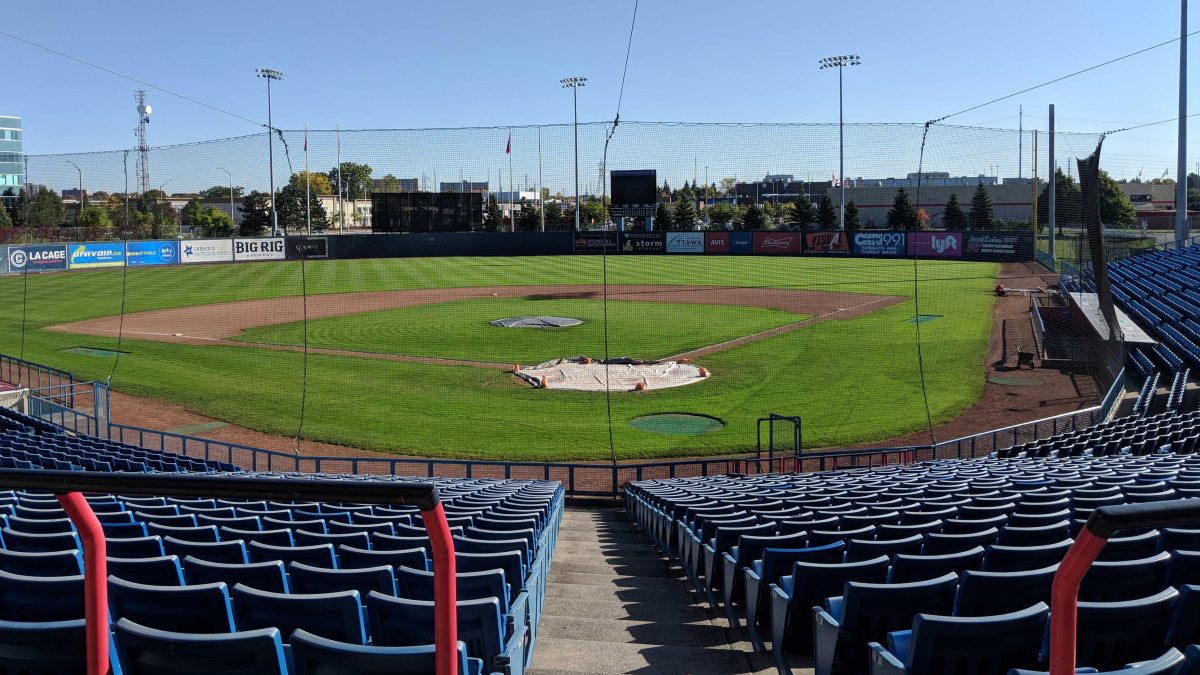 The Raymond Chabot Grant Thorton Park is where the Ottawa Champions play. Will it be where they play in the future is a question being debated in the city. [Photo © Jeffery Tram]
Sports

Following another disappointing season for the Ottawa Champions, the team is now without a league, though they may have new owners.

Three businessmen — Robert Abboud, Rob Lavoie and Fred Saghbini — have signed a conditional agreement to purchase the baseball team. According to Abboud, the group is speaking with two potential leagues for the 2020 season but there is nothing in place yet. The Ottawa Sports Entertainment Group (OSEG) (the group that owns the Ottawa Redblacks, Ottawa Fury FC and the Ottawa 67’s), had also been vying to purchase the Champions.

“We’ve got a lot of exciting ideas, not just on the field but off the field too,” said Abboud on Friday.

On Oct. 16, the Frontier League of Professional Baseball announced it was absorbing five teams from the Can-Am league. The Ottawa Champions were not among them.

Abboud’s group will have its work cut out. The Champions had 41 wins and 54 losses in the Can-Am league this year, the third year in a row with a losing record.

There are also many people who doubt that baseball is viable in Ottawa.

“I’m not convinced the Champions are playing next year,” said Rideau-Vanier Counc. Mathieu Fleury before the news about the league and the possible new owners.

Off the field, the team has racked up around $500,000 in debt. And a city staff report prepared for the city’s finance and economic development committee identified the stadium land, among many other locations, as a possible site for an affordable housing development.

David Guy is a long-time fan of local baseball. He’s been attending games since the Ottawa Lynx became the city’s baseball team in 1993. He goes to the games regularly but would enjoy them more if the Champions found more success on the pitch.

Guy also says the stadium is just too big for the size of the team.

“The Champions (played) at one of the lowest-levels of baseball with about 1,200 to 2,000 people in a stadium built for 10,000,” said Guy. “There would be a better atmosphere in a smaller stadium.”

The City of Ottawa had also been expecting better results. According to a recent report, the city expected its 2013 lease agreement with the team to generate $358,000 per year in rental revenue. According to the report, “the projections presented by the Champions’ business case are not being realized.”

The lease was set to end on Dec. 31, 2024 but the city created a new agreement this year, whereby the Champions would rent the facility for games, with projected revenues for the city of $162,844. Under these terms, a new owner would find the costs to operate the team to be lower than in previous years.

But many fans would be happier if they could see players who may eventually play in the big leagues.

“I think baseball would work in Ottawa if it was affiliated ball,” said Graham Neysmith, a former broadcaster for the Ottawa Champions.

Affiliated baseball means the teams are part of a league with a connection to Major League Baseball (MLB). It is a way for the MLB teams to send promising prospects, who are not ready to play in the majors, to develop their skills in minor league baseball.

“Fans of baseball in Ottawa would be interested in seeing the hot prospects coming through the city.”

Ottawa did have an affiliated baseball team. From 1993 to 2007, the Ottawa Lynx were part of the International League, which qualified as a Triple AAA league. They were affiliates of the Montreal Expos, Baltimore Orioles, and Philadelphia Phillies. Lynx alumni who went on to successful careers in the MLB include J. A. Happ, now a starting pitcher for the New York Yankees, and Gold Glove shortstop Orlando Cabrera, among many others. But even when Ottawa had an affiliated team, attendance dropped over time.

Still, the Champions aren’t without regular fans. “We are not a small city and we deserve to have baseball,” said Laura Beaulne-Stubing.

Beaulne-Stubing is a Champions fan and has attended many games along with her dog. The Bark in the Park event happened three times during the Champions season. Beaulne-Stubing says the attendance rates always seemed higher when fans were allowed to bring their dogs.

Whether these events will continue will depend in part on what the city decides to do with the stadium.

Katz was hoping for a potential partnership with OSEG to negotiate a lease with the city for the park as well as purchase the team.

Fans are hoping the city will leave the stadium in place.

“I don’t want the stadium torn down like some of the city councillors are saying, said Guy. “That would be a shame.”

With the LRT’s Tremblay station nearby, the stadium is also now much more convenient for those who want to take in a game.

Counc. Fleury said he doesn’t believe tearing down the stadium — if it comes to that — is against sport. But he says the city has to make the most of public space.

“Baseball only fills 40 days of the year, out of 365,” said Fleury, though that number would be more like 70 if International League baseball returned to the city.

The city councillor said he believes that the viability of baseball in Ottawa will depend on whether major league baseball returns to Montreal.

Earlier this year, the Tampa Bay Rays proposed a plan to split the team’s 81 home games with Montreal, exciting Expos fans. Currently, they are looking for a plan for a new stadium, including a proposal made by businessman Stephen Bronfman.

If the Expos are able to get their team back, baseball fans in Ottawa could potentially see affiliated baseball come back to the nation’s capital.

As of Oct. 19, the Champions remain without a league, one of many strikes against them as they look ahead to the possibility of a next season.