6 days ago 0 6 min read
We use cookies to provide a personalized experience for our users. By continuing to browse this site, you give consent for cookies to be used.
Got it!
Home > Sports > League brings basketball back with Ottawa BlackJacks 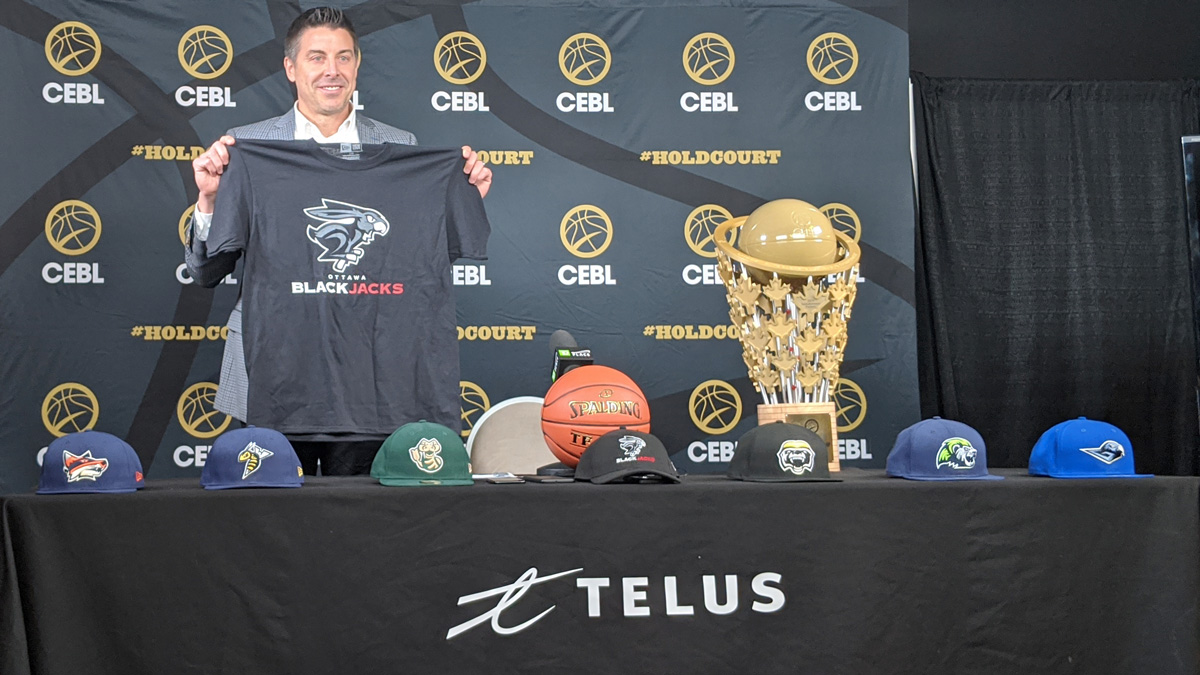 The Ottawa BlackJacks will join the Canadian Elite Basketball League (CEBL) as its seventh team, bringing basketball back to the city.

The team, which is owned by Richard Petko, has a multi-year agreement with TD Place where home games will be played. The ball starts bouncing next May. The team logo is a high octane black jack rabbit. Both were revealed Wednesday at a press conference.

“I hope you like it,” said CEBL CEO and commissioner Mike Morreale on the unveiling of the team.

The CEBL has six other teams in Hamilton, Niagara, Guelph, Edmonton, Saskatoon and Abbotsford, B.C.

“We are a proud Canadian league,” said Morreale. “We are all about showcasing top Canadian talent that come from all over the world and bring them home to play in a domestic league.”

Canadian representation is an integral to the league’s vision. League rules state that at least seven Canadians must be on the 10-man active rosters.

The CEBL Championship Trophy represents the peach basket that Dr. James Naismith used to create the game of basketball, which was invented close to Ottawa in the town of Almonte. There are also maple leaves around the trophy to further showcase the Canadian symbolism.

Morreale says Ottawa has been a target municipality for the CEBL for three and a half years.

“Ottawa is definitely a market we want to be in,” Morreale said. “I am certainly excited about the potential here.”

The stability of sports teams in Ottawa has been shaky, with the recent failures of the Fury and Champions.

This is also not the first time there has been a basketball team in Ottawa, as the Skyhawks folded after one season in the National Basketball League of Canada (NBL). The NBL still operates in Canada.

Despite all that, Morreale is not worried.

“We feel very comfortable,” Morreale said. “We have done the research.”

The CEBL operates in a similar fashion to Major League Soccer. The league is the important entity and serves as a centralized administration. They will assist teams with budgets, contracts, and branding. Morreale says the BlackJacks will different from Ottawa’s last brush with pro ball, the Skyhawks, because the new club will be properly managed and will have a better understanding of the region.

“I’m not sure they had the proper support from a head office perspective,” says Morreale about the failed Skyhawks.

“This is the best basketball — outside of the Toronto Raptors — played in Canada,” Morreale says.

“The fan experience is as equally important to us as the basketball on the court,” Morreale says.

The team announced a season ticket deposit campaign, which allow for priority access to seats. Games will be played on Thursdays and Sundays locally, with the season opener on May 14. Morreale is confident the BlackJacks will attract at least 2000 fans a game.

“We want to attract a more vibrant crowd that comes here not just for basketball, because we know there are a lot of basketball purists, but also comes here for entertainment as well,” Morreale says.

There is no GM or coach yet. Expect announcements in the weeks to come. The roster will be announced after February and will be created with free agents, rather than through an expansion draft. There will be players from U-Sports, including potential local connections in Carleton University and uOttawa, as well as the national team, NCAA, G-League and more.

The Ottawa Citizen is reporting that Carleton’s director of basketball operations, Dave Smart, has been in talks about a possible role with the new pro club.

“This is going to be one of the best teams in the league.”