22 hours ago 0 10 min read
We use cookies to provide a personalized experience for our users. By continuing to browse this site, you give consent for cookies to be used.
Got it!
Home > News > Ottawa > Future floods: Can Ottawa do more to tackle natural disasters? 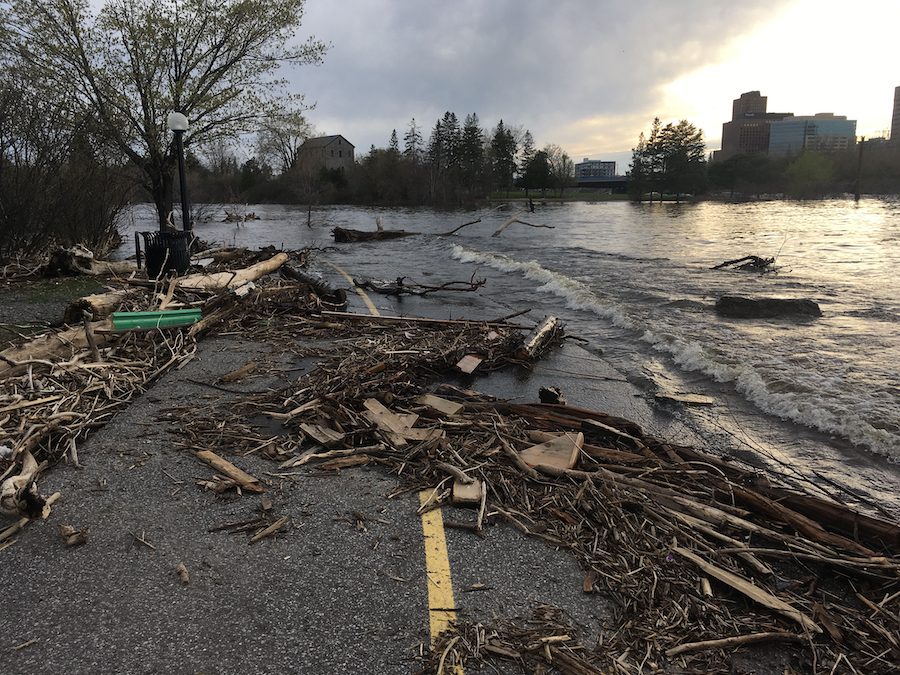 Ottawa cyclists were forced to reroute their daily commute after the pathway behind Parliament Hill flooded in 2019. [Photo courtesy of Lynn Armstrong]
Environment

In April, 2019, Mary Lou Dean and her husband moved from Barrhaven to their dream retirement home in Constance Bay. Three weeks later, they noticed the water was rising. Their property was assessed for risk and they were told that they would probably be OK.

“And a couple of days later we weren’t OK,” Dean said. They fortified the walls around their property and stacked sandbags to keep the flooding river water out.

Built in 2004, Dean’s house is higher up than those of some of her neighbours. That, along with the sandbags, meant the water never reached their deck. But then Dean discovered 1.5 feet of water in the crawlspace under the house. “The groundwater was so saturated that it was coming up from underneath,” she said. Dean and her family pumped water out of their home for six weeks straight.

“We had three pumps going around the clock,” she said. Since the pumps did not shut off automatically, they required constant maintenance. “We’d have to wake up every hour-and-a-half in the night.”

They spent about $2,000 on pumps, a generator and other equipment during the flooding. Dean said the damage to their home was minimal compared to some of their neighbours.

Like many local citizens, Dean is wondering what is being – or should be – done to mitigate the effects of flooding in the city. Rising water levels and excess groundwater from heavy rains have caused significant damage in the region over the last couple of years. In Ottawa-Gatineau, 5,996 homes were flooded or at risk of flooding in 2019. Flooding is now the costliest type of natural disaster in Canada.

While there is some compensation available for flood victims, some say there should be more investment in prevention, not just assistance after the fact.

El-Chantiry knows the devastation of flooding well. His ward has been one of the most affected, with more than 500 homes damaged, and at least five needing to be fully demolished after the 2017 flood.

“This is the new norm. It is going to happen every two years because of the environment and climate change … maybe we must have honest discussions with the residents and talk about relocating people.”

El-Chantiry suggests the Ontario government follow the example of Alberta, which offered compensation in the form of buyouts to residents whose homes had been damaged in flooding in 2013. About 30 per cent of eligible homeowners accepted compensation. Ottawa Mayor Jim Watson has said the city can’t afford similar financial supports, according to CBC News.

At the end of August, City Council released a document outlining policy directions for the new official plan. Mitigating the effects of natural disasters and building a resilient city are central themes in the document.

El-Chantiry said the new official plan will include an updated flood map. The existing map was created in the 1960s, with amendments in more recent years.

“The city’s in a position where financially we can afford to do the flood mapping,” he said. “But other municipalities don’t have that kind of funding and this is not a single municipality approach.”

Bay Ward Coun. Theresa Kavanagh said the plan isn’t intended to address the immediate impacts of flooding, but it does include strategies for mitigating the effects of extreme weather.

“A big part of the official plan is to make use of the land we have and to be more efficient with it,” she said. Kavanagh points to intensification as a key factor in developing a city that is greener and more resilient to flooding, heavy rainfall and other natural hazards.

While councillors look at long-term strategies for resilient cities, some designers are seeking better ways to protect high-traffic areas from rising waters. On a recent walking tour of the pathway behind Parliament Hill, an area severely affected by flooding in 2017 and 2019, National Capital Commission (NCC) senior architect Jamie Brown showed a group the natural buffers built to protect this shoreline.

“The rationale behind the natural system is to find the best balance between structure and nature,” Brown said, “We’re trying to use some of the natural floodresistant characteristics that nature has developed over time.”

Brown said his design is moving away from evergreen trees, as they are not used to being submerged in water constantly, and would not last long.

“The plants are planted in a very specific growing medium, appropriate to the plan that’s in there, and the right size for them to thrive,” Brown said.

The new vegetation plan is being monitored for quality over time, and to see how resilient to flooding, wind and ice movement the new walls are.

“There’s no such thing as flood proof, just flood resistant,” Brown explained, “We’re very happy with the design, and we’re going to continue to monitor and continue to upgrade the design as we go forward; however, if it does flood again, and we know that it probably will, we are ready to come in quickly, clean up the debris, and do the minor repairs which we expect from a flood.”

Angela Bernhardt, vice-president of West Carleton Disaster Relief, said although the community received assistance from the province and the organization, it was still a struggle for her community. The volunteer-run organization raised about $820,000 for flood and tornado victims from 2017 to 2019. The money was used to purchase equipment and building supplies, fuel generators, and to pay for repairs for those who could not afford them.

“People who have gone through both floods have found it very difficult and have gone through what can be described as critical incident stress,” she said. “They are afraid of what is going to happen next year.”