2 days ago 0 2 min read
We use cookies to provide a personalized experience for our users. By continuing to browse this site, you give consent for cookies to be used.
Got it!
Home > Sports > New Carlington Bike Park draws crowds from across city
Community 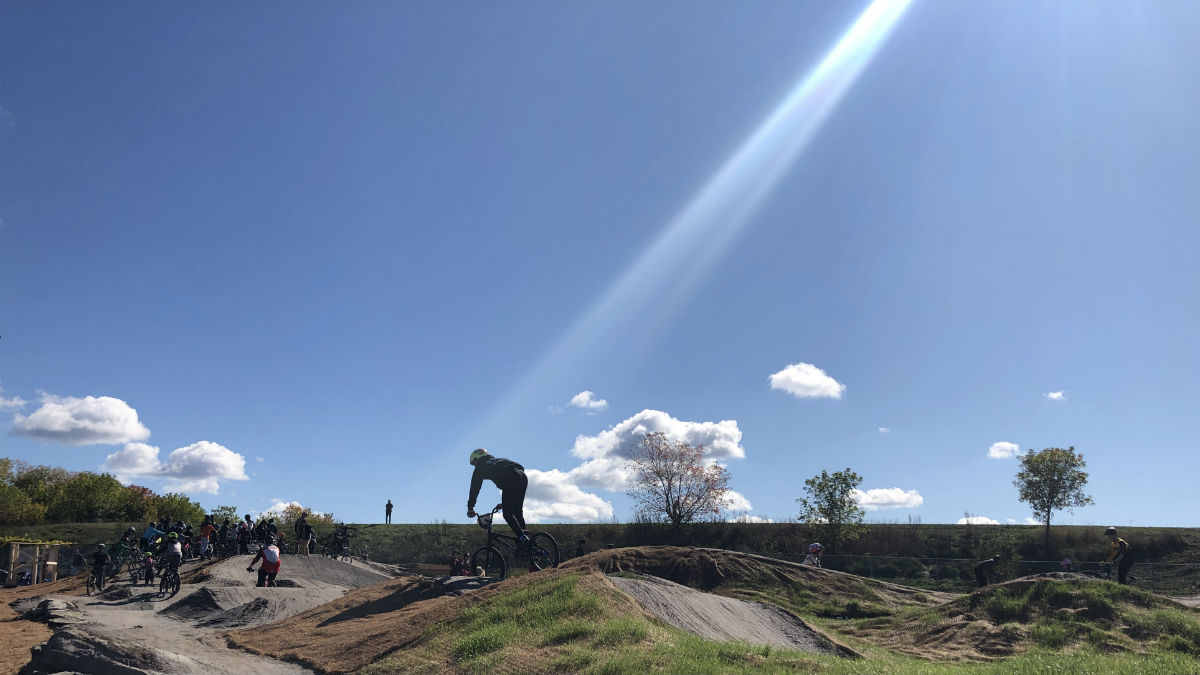 A new mountain biking course at the top of the old Carlington ski hill was packed with bikers of all ages and abilities at its recent grand opening.

The bike park is located at the top of Carlington Park, just south of Carling Avenue near the Queensway. The pump track and skills area feature 300 metres of jumps, drops and banks, an attraction that caters to a range of mountain biking abilities with three circuits of varying difficulty.

The undulating berms, banked turns and ramps allow bikers to progress at their own rate, either coasting through the track or pumping their legs and employing their skills to get air off the rollers.

Kids from near and far lined the construction fences as the finishing touches were put on the course on the morning of the launch on Oct. 5. At 10 a.m., the opening ceremony officially kicked off and more 70 eagerly-awaiting kids and adults took off, crowding the start of the track in excitement.

“As far as we know, it’s the first crushed granite pump track in the country,” said Samaël Piché, project manager at Sentiers Boréals, the Quebec-based company that designed the track.

Sandra Beaubien, past-president of the Ottawa Mountain Bike Association, echoed the excitement of the bikers, saying “there is nothing of this calibre in Eastern Ontario.”

Despite the excitement surrounding the bike park, some members of Carlington’s nearby residential community were not happy about the location of the bike park and its potential environmental impact.

Erika Kiss, a biologist and former species-at-risk specialist with Environment Canada, has been vocal throughout the consultation process about the new bike park’s negative impact on natural areas in Carlington Park.

Kiss has been mountain biking for 35 years, but says she always stayed off unsanctioned trails because she understood the negative environmental impact biking can cause. She has been advocating for the preservation of nearby Carlington Woods, which she believes are threatened by the constant passage of bikes on environmentally protected trails.

Even the green space on which the track was built is what Kiss describes as a “pollinator meadow,” a vital habitat for bees, butterflies and other species.

To try to restore some balance to the pollinator ecosystem and support the monarch butterfly population, OMBA has said a native mix of grasses and milkweed will be planted around the bike park.

Kiss said she appreciates the measures that have been taken to revitalize the native grasses and milkweed destroyed by construction, but that the bigger issue is the continued use of unsanctioned trails.

“They removed valuable habitat I did not want removed, but regardless, they did finally communicate on opening day not to ride in the woods,” said Kiss.

“They also posted online the day before the opening saying, ‘Do not use Carlington Woods to access the pump track — go around, this is protected land.’”

New signage has been added to Carlington Park to try to address this issue, specifying that the woods are a “Protected Urban Natural Feature,” and stating bluntly: “No Cycling in Carlington Woods.”

“I do like to believe that when people know more, they do better,” Kiss said, citing education as vital to protecting the biodiverse woods.

Close friends and avid bikers Mario Tudino and Davidson Brumaire say they used to ride on the unsanctioned trails and in parking garages to do their tricks. Both 13, Mario and Davidson say they now understand the impact on local plants and animals when people ride on unsanctioned trails, and are glad they have an alternative that lets them hone their mountain biking and BMX skills.

“We used to build trails in the forest and people were getting mad at us for that,” said Mario.

“Now we have this track to ride around on and won’t disturb any nature.”

Beaubien and the OMBA say they are hoping the new bike park will help keep traffic out of the protected woods by providing people with a fun, sanctioned place to ride.

Seven-year-old Carly Rothenberger and her father Dave came all the way from Kanata so she could use the bike park for the first time. Carly has been biking for two years and said she has been excited about the bike park opening ever since her dad told her about it a few weeks ago.

Another biker, 11-year-old Devin Swire, had been waiting at the bike park since 9:30 a.m. and could hardly contain his excitement. Swire said that at home in Stittsville, there are only walking trails, leaving him limited options on his bike.

“I’m interested in jumps and rougher terrain now,” he said. Swire has been biking for four years and said he’s excited to work on improving his skills now that the bike park is open.

Because of its central location, the park is accessible by transit for most people in Ottawa and is a good inner-city option for people who can’t access trails outside the city.

Not only is the new bike park easy to get to via transit, but it was also specifically designed to be accessible to as many people as possible regardless of their age, ability or equipment.

“You need to cater to the progression of the bikers, from kids on push bikes all the way through to pro riders who are looking to push their skills a bit more,” said Jérôme Pelland, owner of Sentiers Boréals.

“We expect to see a lot of kids, especially in this area,” said Pelland.

“Not all of them have the skills to ride something like that, so it will be a nice tool to actually teach them to ride a bike. You can learn probably 80 per cent of the skills you need to ride a mountain bike on a park like that.”

The Carlington Bike Park is a pilot project, and will be reviewed by the city in two years to assess its performance and any issues that may arise.