4 days ago 0 3 min read
We use cookies to provide a personalized experience for our users. By continuing to browse this site, you give consent for cookies to be used.
Got it!
Home > Business > Technology > Glebe’s Community Centre’s carbon-reduction project hailed as example to others 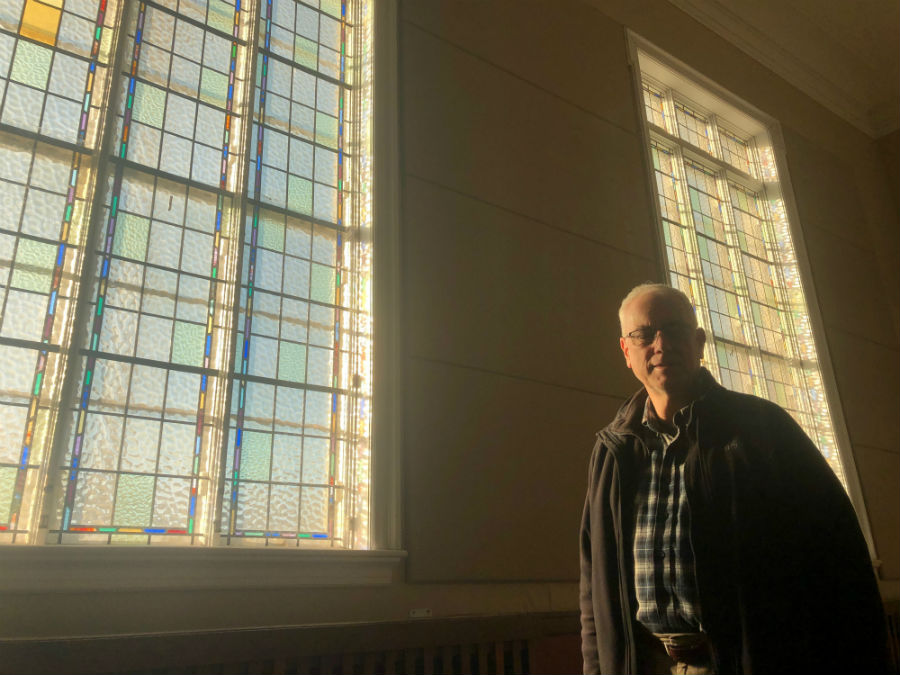 William Nuttle, an energy consultant for 25 years and manager of the carbon-reduction project at the Glebe Community Centre, stands in front of the centre’s main hall windows. The project, which includes improving the energy efficiency of many smaller GCC windows, may eventually lead to retrofitting these larger windows, as well. [Photo @ Max Bakony]
Business

The historic Glebe Community Centre is nearing the finish line of a project that the community hopes will reduce the building’s carbon footprint by half.

The project is intended to serve as an example to spark investments in homes, businesses and other community centres across the city.

Jennifer Humphries, co-chair of the Glebe Community Association’s environmental committee, called the project  “a little microcosm of activity in support of the huge amount of work that needs to be done across the globe, but also at all levels of government.”

“The community’s expression of interest to do something concrete and hands-on has as much to do with something for the building as to further that political agenda,” said environmental consultant William Nuttle, spokesman for the project.

He said the idea, in part, is “to show to the city that, ‘Yeah, there’s interest at the community level to the point that we’re willing to use our time and our energy to help the city deal with its old buildings.’ ”

The project involves installing 12 new windows that will be 11 times more efficient at insulating, as well as a new insulating exit door, a new control system able to adjust ventilation depending on the number of people in the room and some extra air-sealing work.

According to an April 2018 concept report for the project, the renovations would save the same amount as “12,400 miles driven by an average car; 1.8 tons of waste recycled instead of landfilled; 207 propane tanks used for home barbecues; or 5,535 pounds of coal burned.”

Mary Tsai, executive director of the Glebe Neighbourhood Activities Group — which runs many of its programs at the centre — said the GCC makeover may well inspire local residents to undertake their own carbon-cutting renovations.

“These are old windows and they’re original to the building, which are very similar to many of the homes in the neighbourhood,” she said. “I’d imagine that just by noticing the temperature of the rooms being much more air tight and less drafty will be enough for people to consider it for their homes.”

A one-time initiative called the Community Energy Innovation Fund was included in the the city’s 2018 budget. It was awarded to eight community projects aimed at helping to save energy and pilot new energy saving technologies. Close to $60,000 of the $500,000 fund was allocated to the Glebe Community Centre project.

The GCA raised its funds through savings accumulated from annual membership fees of $10.

“The city Energy Innovation Fund has funded a number of projects, but there’s probably not another project like ours,” said Nuttle.

The concept report estimated that the project would save the centre more than $2,400 annually in energy costs.

The new energy efficient windows have a life span of 60 years and should yield energy savings greater than the overall construction costs well before six decades have passed.

Depending on how this project goes, the community centre could undertake further energy-saving improvements. For example, the group spearheading the window retrofits says there’s a possibility that the GCC’s main hall decorative windows could be made more insulating.

However, those windows pose more of a challenge.

“The city feels comfortable investing the money to do just 12 windows and see how this works before we take on something like (the main hall windows),” said Nuttle. “It would be a large commitment of funds to replace these windows.”

He added that because the large decorative windows are a “key architectural component of the building… it’s more of an architectural and heritage concern.”

Such considerations, he noted, were not as important when upgrading the other windows in the building.

The project is expected to wrap up by mid-January.

Construction of the building — originally St. James United Church — began in 1914 at the corner of Third Avenue and Lyon Street. By the 1990s, the building was owned by the City of Ottawa and being run as a community centre.

Plans to close the building and open a community centre elsewhere were strongly opposed by Glebe residents and eventually scuttled. Instead, major renovations were begun in 2004.

For people like Tsai, the historic building was worth fighting for.

“It’s just a beautiful building with a beautiful giant dome and the main hall location is our showpiece room,” she said. “It gives you the sensation that you’re outside, but your indoors — it’s just beautiful and bright, and a happy place.”