In the News: Wednesday, Aug. 5

2 days ago 2 min read
We use cookies to provide a personalized experience for our users. By continuing to browse this site, you give consent for cookies to be used.
Got it!
Home > Capital Currently > Housing activists condemn Ontario bill 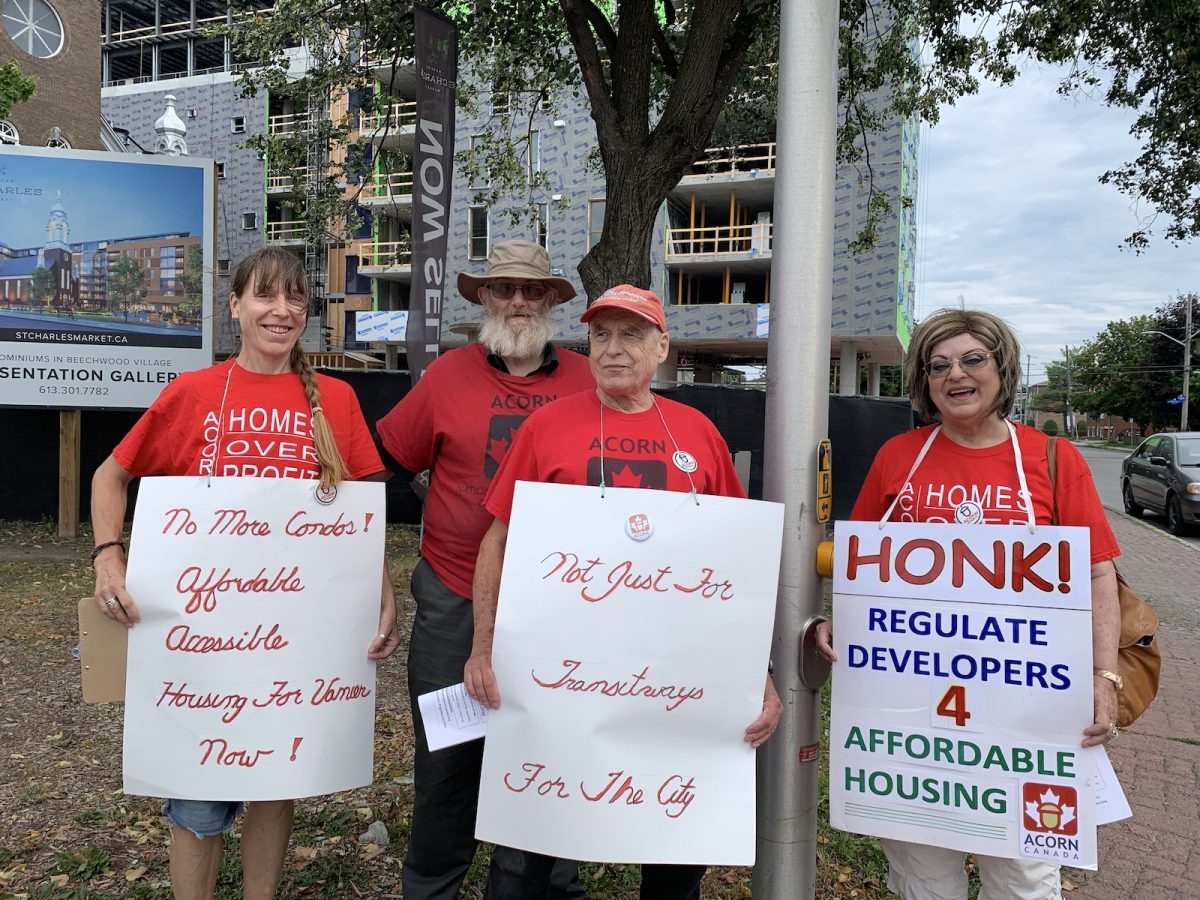 Housing activists staged a protest in Vanier on Aug. 8 to condemn a new provincial bill that they say will lead to more luxury condo developments and fewer affordable homes in many parts of the city.

Members of the Vanier branch of ACORN, the Association of Community Organizations for Reform, handed out flyers at the corner of St. Charles Street and Beechwood Avenue while gathering names for a petition against Ontario Bill 108 — the “More Homes, More Choice Act” — and to press for more “inclusionary zoning” in Ottawa.

ACORN said the proposed legislation fails to encourage the construction of affordable housing except in areas near transit hubs. The group said Ontario should implement inclusionary zoning that would ensure 25 per cent of all new residential developments are affordable units, and that the proportion should rise to 35 per cent for all developments within one kilometre of rapid transit.

ACORN members who have been advocating for city-wide inclusionary zoning — including for a new development currently under construction near the Aug. 8 protest site — said the proposed provincial legislation undermines that goal.

According to the CBC, associations representing Ontario’s realtors and home builders say such policy would create more homes for thousands of people every year. However, ACORN representatives said many neighbourhoods would be left with fewer affordable condos and rentals, and an increase in Airbnb short-term rentals.

“This is going to cause neighbourhoods like Vanier to be gentrified,” said Blaine Cameron, the citywide chair for ACORN.

Cameron said the Ontario bill would increase housing costs, and would end up pushing low-income residents of Ottawa farther out to the margins of the city.

“A lot [of affordable housing] is being bought up and being bulldozed. What we’ve got in its place is what we have behind us: expensive condos,” said Mavis Finnamore, former chair of South Ottawa chapter of ACORN, pointing to a new building under construction.

“They are not replacing low-cost housing, and that is putting major pressure on people,” she added.

Finnamore, a resident of Heron Gate for over 30 years, was part of the first group of tenants that were evicted and had their townhouses demolished.

In September, 2018 more than 500 tenants — mostly low-income residents — were evicted from their homes as the owner of Heron Gate planned to demolish the townhomes to allegedly build new condos, CBC reported.

“This is personal and I don’t want to be pushed out of where I am,” said Finnamore.  “It could happen because we don’t have strong laws to protect low-income tenants.”

Inclusionary zoning, said Finnamore, “is now very important to low-income people, and it certainly touches upon Heron Gate and elsewhere in Ottawa.”

The McMichael Canadian Art Collection is celebrating the 100th anniversary of the first exhibition of paintings by… https://t.co/rV6sd6cJpF

In the news: The last cat from the Parliament Hill sanctuary survived an emergency trip to the vet. 51 hand sani… https://t.co/tLJEe5Gdm6