4 weeks ago 0 61 min read
We use cookies to provide a personalized experience for our users. By continuing to browse this site, you give consent for cookies to be used.
Got it!
Home > News > Science > Insect watching during the pandemic: In a standstill world, nature’s transformations offer soulful reassurance 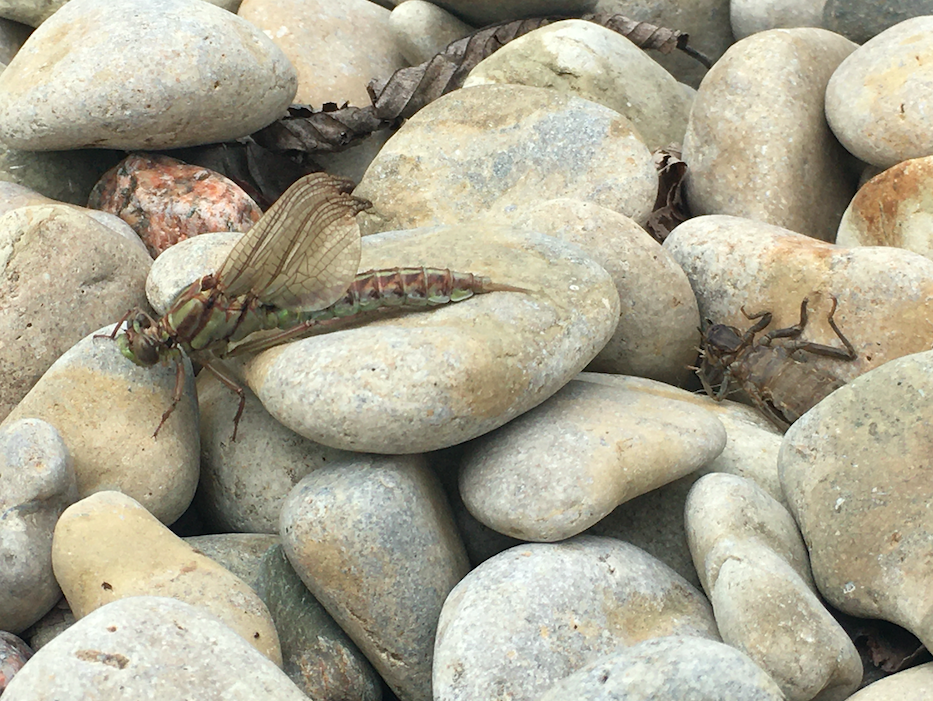 A dragonfly emerges from its nymph casing on the shores of Lake Winnipeg. (Photo credit © Menaka Raman-Wilms)
Canada

For many Canadians, this summer has been quieter than most. Since travel during the pandemic isn’t really encouraged, many of us are staying closer to home, which may present the opportunity to observe things to which we don’t usually pay attention.

In my case, that meant observing insects.

“I think that’s something that (most) people haven’t noticed … how really beautiful insects are,” said Julia Mlynarek, an entomologist I spoke with from the Montréal Insectarium. “Because of the pandemic we’re kind of forced to cocoon ourselves and we can actually look at things.”

Working at home from my parents’ house in Winnipeg for several weeks has meant that I’ve spent a lot more time in the backyard. In addition to observing the constant growth in their vegetable and flower gardens, I began to pay attention to the small insect dramas unfolding around me — the most captivating of which was watching caterpillars turn into butterflies.

“You can really see the cycle of life,” Mlynarek said, referring to that transformation.

She said that observing insects undergo such a metamorphosis also gives us some perspective during this strange time.

“Maybe our lives have stopped a bit or have become different, but everything is still moving along,” she said. “Some people may be sad about not being able to do things, but at the same time, I think we should be happy that the world is doing alright.”

In mid-June, we noticed a chrysalis hanging from the frame of the garage door. Another caterpillar soon joined it.

Over the following two weeks, I watched a transformation happen.

The caterpillars “probably hatched sometime in May and started eating,” Mlynarek said, adding that they need to go through several larval stages before they’re ready to transform. Mlynarek identified this species as a Compton Tortoiseshell.

The caterpillars are highly vulnerable at this stage, explained Mlynarek. They haven’t yet developed the hard chrysalis, which keeps them safe from predators, but they are no longer mobile. They need to quickly “develop from that fragile stage, where they’re totally exposed, to a harder skeleton,” she said. This process happens in a matter of hours.

The sturdy outer shell of a chrysalis helps keep the insect safe. “That’s where they kind of remodel themselves and reshape themselves into adult forms,” said Mlynarek.

A chrysalis is “kind of like a ball of goo on the inside,” said Mlynarek, “where they become an adult. It pretty much deconstructs and reconstructs itself.” The entire process usually takes a couple of weeks.

The chrysalis got significantly darker over time, changing from a bright green to a dark grey. A butterfly had emerged from the first chrysalis during the previous night, and the empty casing is almost see-through.

The butterfly emerged early in the morning, and stayed close to its casing for a few hours. “You can really see the cycle of life,” Mlynarek said, “from a caterpillar to an adult. Seeing how that process develops is fascinating.”

The butterfly was one of several Compton Tortoiseshells that emerged in the backyard the same week. Their wings are dark on one side, but have orange markings on the other.

“When you have time to sit in your backyard and look at all these insects, you can actually see how things change throughout the day or throughout the week,” said Mlynarek. She added that this can be a unique opportunity for us to watch the diversity of backyard life “moving along through time.”

Working from home during isolation, when the weeks can easily blend into one another, watching the development of the chrysalis also helped me distinguish one day from the next.

Jim Davies, a professor of cognitive science at Carleton University who has studied how the pandemic can affect us, said that staying home for days on end can mess with our perceptions of time.

“When you look back and think about how long something took, one cue that you use is how much stuff has happened in that amount of time,” he said. “If you’re doing the same thing every day, there isn’t as much perceived change.”

Davies explained that when we’re spending every day at home without events or things to look forward to, every day tends to feel the same. “However, when you look back on it, it feels like it flew by,” he said, “because one day isn’t distinguishable from the next.”

Watching the chrysalis develop helped me keep track of the passage of time during those weeks. It also made me think about how even though my life remained relatively the same over those fifteen days, this creature was undergoing a complete transformation during that same period.

A few days after the emergence of the Compton Tortoiseshell, I had another insect sighting. This one was on a beach, on the rocky shores of Lake Winnipeg.

We had gone for a hike in Hecla-Grindstone Provincial Park, a couple of hours’ drive north of Winnipeg, and stopped on the beach for sandwiches. We were nearing the end of our lunch when our interest was piqued by an insect on the rocks next to us.

At first it seemed to have two heads. But then we realized that one of the heads was just part of the insect casing. Soon we could see that a dragonfly was emerging.

Dragonfly nymphs can spend four to five years in the water, according to Mlynarek. “Once they’re ready, once they’ve eaten enough and they’ve gotten big enough, they crawl (out),” she said. Mlynarek identified this dragonfly as a Midland Clubtail.

The process of emerging as a dragonfly is called eclosion. “That’s when they actually crack open their back and they start crawling out,” Mlynarek said.

“Dragonflies morph as they’re growing,” Mlynarek explained, which is different from how a caterpillar deconstructs itself and then reconstructs itself as a butterfly in a matter of days. “They grow into their adult form within the last nymphal stage, and so when they crack open they can just crawl out.”

It took 15-20 minutes for the dragonfly to wriggle out of its casing.

After they emerge, Mlynarek said, their insect blood fills in their body and helps them take shape: “They balloon themselves with their blood and they take the full form.” She added that they’re really fragile at this point because “their exoskeleton, their skin, is really soft.”

“They’re prone to predation at that point because they can’t really fly,” said Mlynarek. “Their wings aren’t really functional, because they’re kind of wet and heavy. It takes them 24 to 48 hours to dry out.”

Though it can be interesting to watch these transformations, Mlynarek added that it’s also important to not interfere with the natural process or disturb the insects. Showing respect to nature, she said, is key.

During a summer when much of our world has come to a standstill, I found something reassuring in watching these changes.

The progression from caterpillar to butterfly and the emergence of the dragonfly were reminders that life, in many forms, is still going on as normal. And if we find ways to look closely enough, we may catch a glimpse of some important moments.