1 week ago 0 1 min read
We use cookies to provide a personalized experience for our users. By continuing to browse this site, you give consent for cookies to be used.
Got it!
Home > Sports > Keeping in check: Chess helps me get through the pandemic 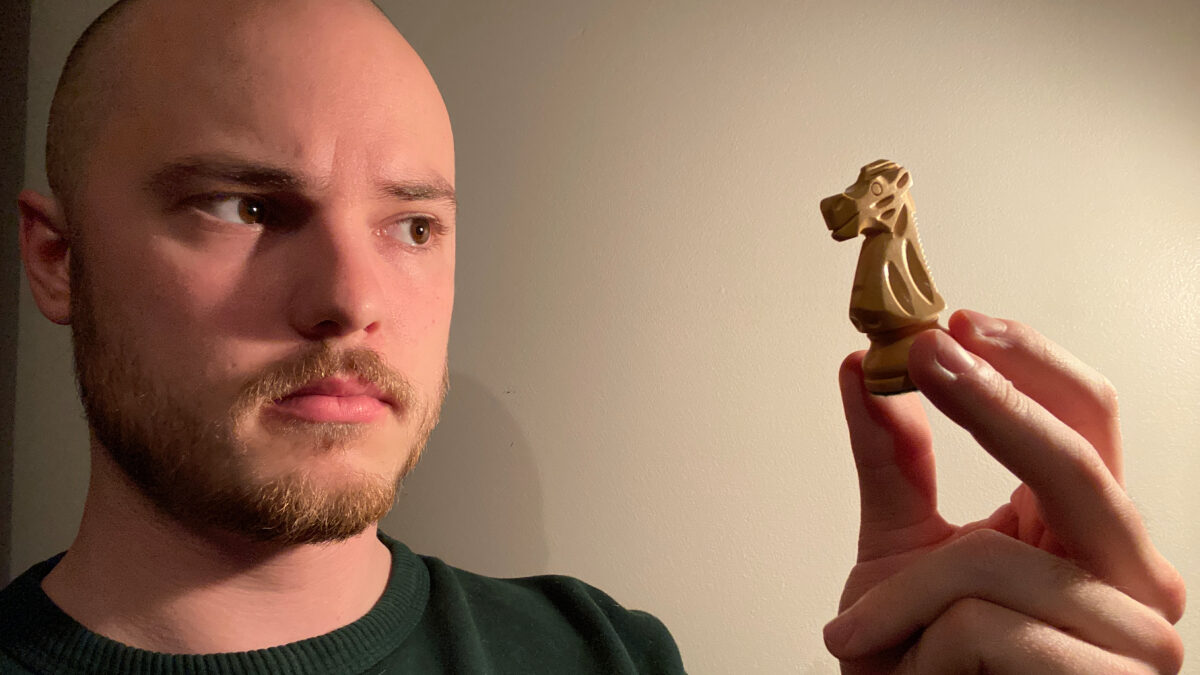 Jon Rudnicki says the knight is his favourite chess piece because it is sneaky with its movement and its attack. [Photo ©️ Jonathan Rudnicki]
Commentary

Keeping in check: Chess helps me get through the pandemic

I learned how the pieces moved across the board when I was five. My grandfather had a chess set in a small room in his basement. It was my favourite room.

I would occasionally play against my younger brother or my father while we visited. And eventually we got our own chess set and would play more often. But my understanding of the game remained limited to where the pieces could go.

There is much more to the game than just knowing how the pieces move. There are thousands of pages of material to study. From what chess teachers call “principles,” simple tactics like forks, skewers and pins, openings you can memorize for a slight advantage or a preferable position, and endgame tactics that chess masters study repeatedly to glean the slightest advantage.

But I didn’t know any of this then. I would simply make a move having thought one or two plays ahead, vaguely anticipating what would come next.

In the summer of 2020, I was working from home and spending a lot of time on my computer as the world outside was adjusting to the pandemic.

Out of boredom, I pulled up a website for online chess. Perhaps I was curious about how my childhood “skills” held up against the internet. The site matches you against another random player with a similar skill level or “rating,” but the site doesn’t know your rating if you’ve never used it before.

So, it gives you 10 games against a variety of players to determine how you stack up.

I was instantly hooked. The rules of the game came back to me as I lost most of those early games.

I began to consume as much chess material as I could understand. I learned those tactics and strategies, even some simple openings. And the most satisfying part was that I began to notice improvement.

In the fall of 2020, Netflix released The Queen’s Gambit, a fictional story about a young chess prodigy dealing with personal trauma while climbing international rankings. Of course I devoured it. Many others did, as well, causing a surge in chess set sales and a spike in games played at online chess sites.

It seemed like I wasn’t alone in rediscovering the game during the pandemic.

I got into a habit of playing whenever I could. And I began to solve at least one chess puzzle a day. My online rating rose from below 600 to higher than 1,300.

I had a sense of progress when a lot of people felt stagnant. It wasn’t a solution really, but I thought to myself that it was a healthy distraction.

And my chess habit has not gone away. Pulling up the mobile chess app when I’m bored has become an instinct. Instead of scrolling infinitely on social media, I now play chess and solve chess puzzles.

I even managed to get a couple friends hooked on the game.

In early December 2021, Norwegian grandmaster Magnus Carlsen defended his world championship title against a Russian challenger, grandmaster Ian Nepomniachtchi. It was the first major chess event I followed from start to finish.

Witnessing the pure skill and mental fortitude during the match was awe inspiring. Despite what ended up as a lopsided result in Carlsen’s favour, Game 6 saw the two grandmasters play an exhausting match for nearly eight hours straight.

Of course, I can never even hope to become that good at chess. It’s simply impossible. Not that I want to. I find chess to be the most fun when my opponents and I make mistakes, create drama on the board and take advantage of a slight misstep.

Many chess masters say that chess is a constructive game because it teaches its players responsibility and dealing with the consequences of your actions.

There is no luck in chess. It is based solely on the moves made by each player.

Maybe this is why I’ve continued to play chess online and solve puzzles everyday throughout the pandemic. I was able to take control of something during a time when I didn’t have much of it in my life.

Chess is an interesting game because it’s close to being objective. Computers can make the very best moves and crush any human. But when humans play against humans, at any level, there is a creativity that flourishes in the execution of a plan, a clever counterattack and the beauty of an impenetrable defence.

Former world chess champion grandmaster Garry Kasparov once said: “Chess is one of the few arts where composition takes place simultaneously with performance.”

It’s a quote that I think captures quite nicely why this game is unlike any other.

There are a lot of serious problems in the world that a game can’t solve. But chess players can practise discipline, learn and get better, which is a simple lesson that can be applied to much more than the game itself. And through this pandemic era, that’s been a real blessing.