6 days ago 0 5 min read
We use cookies to provide a personalized experience for our users. By continuing to browse this site, you give consent for cookies to be used.
Got it!
Home > Health > Mental Health > Land-based healing offers treatment program for youth rooted in Indigenous culture 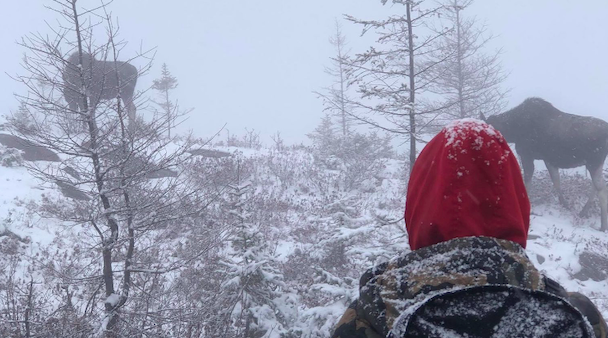 In October 2019, youth at the Walgwan Centre embarked on a 10-day trip to the bush in Northern Quebec, where participants learned how to traditionally fish salmon and hunt moose while living off the land as part of reconnecting to their culture. [Courtesy Walgwan Centre]
Canada

By Camryn Patterson and Kimberley Moriarity, 1 year ago 0 5 min read

Dream catchers and feathers hang from the ceiling of the reception area at the Walgwan Centre in Gesgapegiag, Quebec, welcoming visitors to Mi’kmaq territory on the south shore of the Gaspé Peninsula.

The centre is a place where Indigenous youth battling addiction and mental health challenges can start a healing journey by reconnecting to and renewing their relationship with the land.

As a teen, Kahionwinehshon Phillips participated in a land-based healing program at Walgwan when she had the opportunity to recover her Indigenous identity. Phillips is Mohawk. She said she was at a standstill after countless meetings with social services until she was presented with three brochures about Indigenous healing and land-based programs.

The program Phillips was looking for had to be attuned to her own traditions and culture. This led her to the Walgwan Centre, which offers programs that serve youth from First Nations across Eastern Canada. Youth can wait weeks or months to start treatment because of demand: it is the only bilingual and youth-specific treatment centre in Quebec.

At the Walgwan Centre and in similar programs across the province, youth are building strong bonds with each other and with Elders through cultural activities and shared traditional knowledge.

Land-based healing is not limited to youth. Programs such as the Chisasibi Land-Based Healing Program in Quebec offer a healing journey to any Indigenous person. And such healing programs can be found across Canada — in Labrador, Ontario, Northwest Territories, Yukon, Nunavut and B.C.

Land-based healing offers an opportunity for Indigenous people to heal by reconnecting to their culture through activities promoting healing, therapy and traditional knowledge passed on by Elders. The programs are important to the healing of Indigenous individuals and their larger communities as they provide ready access to treatment services.

The programs are built upon traditional knowledge but they also incorporate Western psychiatry and therapy, said Kayla Gedeon, the clinical advisor at the Walgwan Centre. Many youth in the program “don’t have a huge knowledge of the history of Indigenous Peoples in Canada, so they are living with this internal struggle going on and they don’t understand where it’s coming from.”

The program provides a one-on-one counsellor assigned to each youth participant in addition to cultural mentors, such as Elders within the community, who facilitate cultural activities and pass on traditional knowledge. This follows a “two-eyed seeing” approach “respecting both Indigenous knowledge and Western knowledge. It is a lens that you look at the world through,” said Simon Brascoupé, an adjunct professor at Carleton University and a member of the Kitigan Zibi Anishinabeg First Nation in Maniwaki, QC.

“It is an important concept because it respects both knowledge systems through this double lens,” said Brascoupé. Indigenous mental health services and programs have been adapting to try to understand the lived experiences of Indigenous peoples, he added.

Land-based healing programs and practices are increasingly becoming safe spaces for Indigenous youth and other community members, Gedeon explained. She added that parents want to send their kids somewhere they are understood and where there is a knowledge of their history.

Land-based healing programs have the potential to address this shortcoming facing Indigenous peoples when they access standard health services. With program material focused on Indigenous culture and history, Gedeon said treatment services have a role in educating youth about their histories as a part of their healing journey.

“We live in 2020. We can’t exactly go back to our ancestral ways and have our WiFi, but we’ve adapted as Indigenous people. We have always adapted,” said Heather House, who recently was the president of the Miyupimasstisuin Chisasibi Wellness Team.

House grew up watching her father, Larry, work tirelessly to build activities and programs for their community, leading up to his involvement in the development of the Chisasibi Land-Based Healing Program.

Rites of passage ceremonies mark important transitions in one’s life. They’re designed to prepare a person for their new role. These ceremonies help form identity because they look at each transition as a milestone and achievement, House said, “when we do these in order, it gives youth a sense of honour.”

Another activity is an overnight journey to learn survival skills on the land. They want to teach youth that hunting isn’t simply shooting an animal and taking it home— “it has an overall spiritual connection to the way of life as a man,” she said.