6 days ago 0 5 min read
We use cookies to provide a personalized experience for our users. By continuing to browse this site, you give consent for cookies to be used.
Got it!
Home > Featured > Music helps Jewish community mourn and remember the Holocaust 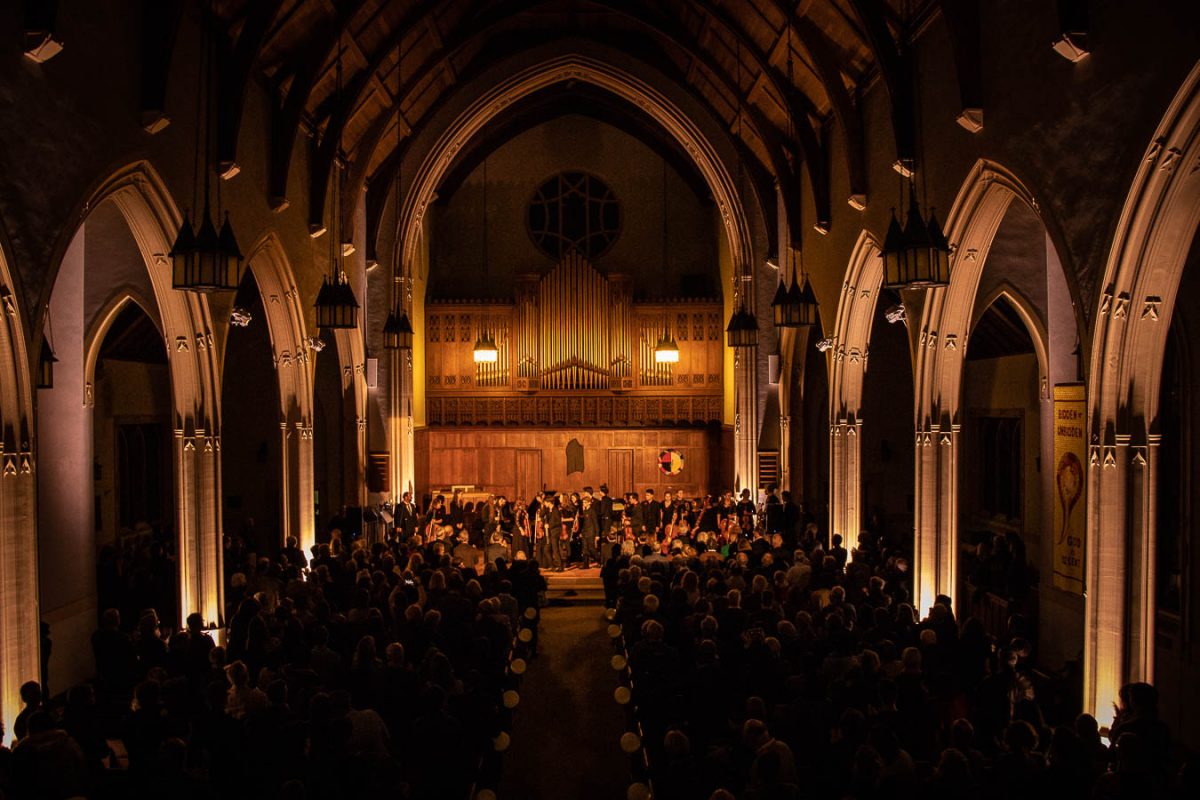 The synagogue’s soft lights glinted off the soloist’s violin as he filled the room with the sorrowful notes of Bach. Niv Ashkenazi was playing to commemorate the hundreds of Jewish temples in Germany that were burned and shattered eight decades ago.

The large audience, mostly members of Ottawa’s Jewish community, listened, mesmerized not only by Ashkenazi’s ability to draw out the despairing and elegant tones of the piece he played, but also by what he is playing them on: a violin saved and restored from the horrors of the Holocaust.

The Nov. 7 concert at Kehillat Beth Israel Synagogue commemorated the 80th anniversary of Kristallnacht — the Night of Broken Glass — in which hundreds of Jewish synagogues and shops were looted and razed across Germany by civilians and police in one night in 1938. At least 91 German Jews were murdered that night and thousands were sent to prisons and concentration camps.

The concert featured the first ever Canadian musical performance on a Violin of Hope, part of a collection of restored instruments owned and played by Jewish musicians during the Holocaust.

“These instruments are their owner’s voices,” Ashkenazi said later in an interview. “It’s an honour to be able to share those voices.”

The violin Ashkenazi played is believed to originate from Yugoslavia and was brought to the U.S. some time after the Holocaust. The instrument, which has an engraved Star of David on the back, was restored by the founder of Violins of Hope, Amnon Weinstein.

The performance was Ashkenazi’s first since the mass shooting in a Pittsburgh synagogue on Oct. 27 that left 11 Jewish congregants dead and seven others injured, shocking Jewish communities across North America.

Ashkenazi, who studied violin at the Juilliard School in New York, said he believes one of the most effective ways to fight hatred is teaching through music.

“Anti-Semitism is very real and alive and we have to fight it by telling these stories,” he said. “It’s really important to remember and to recognize that this happened.”

Ashkenazi’s concert was followed by an address on the lessons of Kristallnacht by Michael Berenbaum, one of the founders of the U.S. Holocaust Museum in Washington. Berenbaum stressed that events like the recent mass shooting in Pittsburgh illustrate how dangerous it can be to let anti-Semitism go unchecked.

Another concert for Ottawa’s Jewish community – this time performed by young German musicians three days after Ashkenazi’s performance – honoured the memory of the six million Jews murdered during the Holocaust.

The National Youth Orchestra of Germany, made up of youth aged 14 to 19, played chamber music composed by musicians whose work was banned during the Holocaust. They also played pieces by composers who fell victim themselves to the Nazis.

The free concert, held under the high-vaulted ceilings, stained glass windows and dim glow of the Southminster United Church, was organized by the German Embassy in cooperation with the Centre for Holocaust Education and Scholarship at Carleton University.

Eva-Ricarda Willems, the embassy’s head of culture and communications, emphasized the importance of memorializing the composers with concerts such as the one at Southminster, especially in the aftermath of Pittsburgh.

“When something like this happens, it has always been the duty of Germans to stand up against it right away and say something,” she said. “We don’t only want to remember, we also want to look to the future. Anti-Semitism is on the rise again and we want to work against it.”

Willems said she hopes events like the concerts at Southminster and Kehillat Beth Israel will bring some solace to Ottawa’s Jewish community.

“In situations like this, when words are missing, it’s essential that music comes in.”

Jewish communities across Canada are no strangers to anti-Semitism. The same day as Ashkenazi’s performance at Kehillat Beth Israel Synagogue, Prime Minister Justin Trudeau stood in the House of Commons and apologized for Canada’s decision to deny entry to over 900 German Jewish refugees aboard the MS St. Louis in June 1939. The ship was ultimately forced to return to Europe, where many of its passengers were murdered in the Nazi concentration and death camps.

Just three days before the Oct. 27 shooting in Pittsburgh, swastikas were spray-painted on a Kanata elementary school. In Toronto, four Jewish teens wearing religious attire were attacked and robbed by nine other teenagers the evening of Nov. 11. The Toronto Police are treating the incident as a hate crime.

Jews in Canada are the most targeted for hate crimes, according to data from the Canadian Centre for Justice Statistics – a branch of Statistics Canada.

The data, collected from municipal police forces from across the country, shows that across Canada, there were 221 reported hate crime incidents targeting Jews and 139 incidents targeting Canadian Muslims in 2016. That’s the highest amount since 2012. The province with the most anti-Semitic hate crime reported in 2016 was Ontario, with 148 reported incidents. The second highest was Quebec with 35.