1 week ago 0 5 min read
We use cookies to provide a personalized experience for our users. By continuing to browse this site, you give consent for cookies to be used.
Got it!
Home > Sports > New stadium lease brings hope of a successful revival of professional baseball in Ottawa 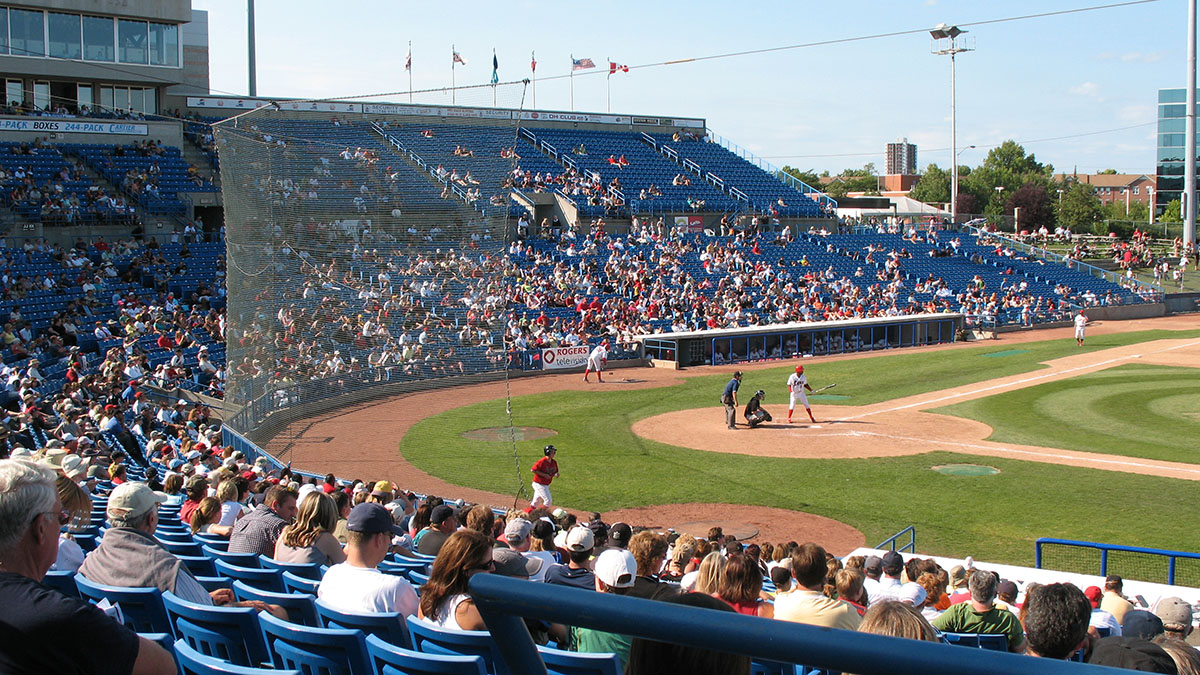 Professional baseball will be returning to the nation's capital for the first time in two years thanks to a new stadium lease and a deal between the City of Ottawa, Winnipeg Goldeyes owner Sam Katz and the Ottawa Sports and Entertainment Group. The 27-year-old RCGT Park on Coventry Road has hosted four different teams, including the Ottawa Lynx seen here playing in 2007. [Photo @ Creative Commons]
Business

Professional baseball is expected to return to Ottawa in 2021 after a new lease was signed with the city to bring a Frontier League expansion franchise to the Raymond Chabot Grant Thornton Park off the Vanier Parkway.

The lease is with the owner of the Winnipeg Goldeyes owner Sam Katz and the Ottawa Sports and Entertainment Group — owner of the Ottawa Redblacks. The Goldeyes are part of the American Association of Independent Professional Baseball and have a long history in the Manitoba capital.

Katz is an experienced, Canadian-based minor league baseball team owner who has committed to bringing high-level competition in the sport back to Ottawa.

“The Goldeyes have been one of the stellar operations in our industry since 1994,” Bill Lee, longtime commissioner of the Frontier League, told Capital Current from his home in Shiloh, Illinois.

Lee said Katz’s wealth of experience is a unique and valuable quality.

Lee has been the commissioner for the Frontier League for 26 years. His 40 years of experience in the industry includes time as a player in Major League Baseball’s Atlanta Braves organization, as a general manager, and as vice-president of sales and marketing in minor league pro hockey for four years.

OSEG owns the Redblacks and the Ottawa 67’s and manages TD Place stadium and arena — including concerts and other major events — as well as the surrounding Lansdowne commercial district. Lee said the company’s presence in the Ottawa market, combined with Katz’s experience in minor league baseball, makes them a strong owner-operator team.

Katz and OSEG will pay the city $125,000 annually over 10 years, as well as picking up the $473,000 in debts owed by previous baseball owners, for the right to host a Frontier League team at RCGT Park.

The recent history of pro baseball in Ottawa stretches back to 1993 with the Ottawa Lynx, the triple-A affiliate for the Montreal Expos before the club moved to Washington. The Lynx lasted 15 seasons before departing to Allentown, Pennsylvania because of low attendance.

There were some highlights during those 27 years. The Lynx won the first championship in Ottawa’s professional baseball history in 1995 and the Ottawa Champions won the Can-Am League title in their second season (2016). There were years of good attendance, especially the early Lynx years.

Last month, the league signed a deal with Major League Baseball to become an official partner.

“This partnership will be beneficial in growing our great game of baseball in all of our United States and Canadian markets,” Lee said at the time. “Our teams and fans will all be excited to see the league grow in years to come. The Frontier League began in 1993 — to have a relationship with Major League Baseball is one of the greatest moments in league history.”

The Frontier League absorbed the former Can-Am League — which had included the Champions — after that circuit ceased operations in 2019.

“Our ownership team is thrilled to be joining the Frontier League,” Sam Katz said in a Sept. 25 announcement issued by the league.  “For nearly 30 years, the Frontier League has helped set the bar for independent baseball, and we are proud to become a part of its rich history.  We very much look forward to serving the City of Ottawa, and providing our fans affordable, family-friendly entertainment for years to come.”

The addition of an Ottawa franchise will expand the league to 15 teams and provide it with its first Ontario club. Thanks to the merger with the Can-Am League, the Frontier League already has two teams in Quebec — the Quebec Capitales and Trois-Rivieres Aigles.

“We’re excited to be able to provide affordable family entertainment and fill the void left by the Champions,” Regan Katz said. “Ottawa deserves to have baseball.”

The Goldeyes are the only Canadian club in the 12-city American Association, which is based in the U.S. Midwest.

The first order of business for the new Ottawa team was announcing Steve Brook as its manager. Brook managed the O’Fallan, Missouri-based River City Rascals to a championship last season and had led that club since 2010.

He comes to Ottawa with a Frontier League coaching record of 542 wins and 415 losses — good for the sixth-most wins in league history – along with nine winning seasons, seven playoff berths, six finals appearances, and two championships (2010 and 2019).

“We are thrilled to hire someone of Steve’s calibre,” Sam Katz said in the Oct. 6 announcement. “Our goal is to build a winning culture at all levels of the organization, and Steve’s resume speaks for itself. He understands what it takes to succeed in the Frontier League’s competitive environment, and comes highly recommended from his peers as both a baseball person and a man of character.”

The younger Katz said the club was looking for someone established in the league with good connections who could integrate into Ottawa well. Brook being bilingual was an added bonus, he said.

Brook is now assembling a coaching and scouting staff to build a roster of players from scratch.

Another task is deciding a team name. The team will be giving fans a chance to contribute to the process through a Name the Team competition. Fans can submit their ideas via the team’s website until Oct. 28.

“We look forward to hearing everyone’s ideas, and are excited to include the community in our building process,” Regan Katz said via email. “We are open to suggestions from all categories, whether it be wildlife, history, culture, or culinary.  Ultimately, we just want the name to be fun, and one that represents our mission to offer affordable, family-friendly entertainment.”

Previous team names are not encouraged though. “(Champions) is a name we will stay far, far, far away from — no interest,” Sam Katz told the Ottawa Sun on Sept. 25.

The winner of the Name the Team contest will receive a prize and be recognized during the team’s home opener.

The next step for the team and its officials is to establish themselves in the community and to begin the plan for providing an entertaining experience, he added.

Lee agreed that seeing baseball as part of an overall entertainment package is key.

“We’re not in the sports business, we’re in the entertainment business,” he said.

“The basis is providing affordable family entertainment, and the baseball is secondary,” Regan Katz noted.

Lee took it a step further and said that they intend to provide the equivalent of a “dinner theatre” experience “because what you’re there to do is to feed people and entertain them for three hours.”

Trying to start this revival of professional baseball in Ottawa during the COVID-19 pandemic creates some challenges, Lee acknowledged.

First, the number of fans that can attend games beginning next spring will depend on public health directives at the time. “It boils down to will there be a vaccine, and what the government restrictions will be on crowds,” Lee said.

“With 10,000 seats there is a lot of space and we can accommodate a lot of people … everything is based on how many fans we can have (in RCGT Park),” Regan Katz said.

And the parking lot for RCGT Park is currently being used by Ottawa Public Health as a major drive-through COVID testing site.

“Baseball in Ottawa would not resume until next spring at the earliest. If the site is still used for testing at that time, we will work out a plan to address the parking requirement,” Dan Chenier, the City of Ottawa’s general manager of recreation, cultural and facility services, told Capital Current.

Another key issue will be the border restrictions in the spring. The Toronto Blue Jays had to play their games during the 2021 Major League Baseball season at a stadium in Buffalo, New York because of restrictions.

Since the Frontier League has three Canadian teams, the logistics are more complicated.

“I hope we will be able to play in their (Canadian) markets,” said Lee, adding that contingency plans similar to the Jays’ arrangement are being contemplated. “If we do have to do something like that, we’ll cross that bridge when we get there.”

Lee said he hopes the size of the Frontier League and the strength of its franchises, combined with strong ownership and management from the experienced Katz group, will help Ottawa’s professional baseball revival succeed.

Ottawa Mayor Jim Watson expressed his excitement about the return of professional baseball in the Frontier League’s announcement.

“I am thrilled that the Frontier League is coming to RCGT Park. Ottawa is a great sports city and the new partnership between OSEG and Mr. Katz is exciting news for our growing baseball community,” said Watson. “I look forward to the seasons ahead.”