5 days ago 0 3 min read
We use cookies to provide a personalized experience for our users. By continuing to browse this site, you give consent for cookies to be used.
Got it!
Home > Transportation > OC Transpo users get free ride in December, frozen fares until LRT returns to full service 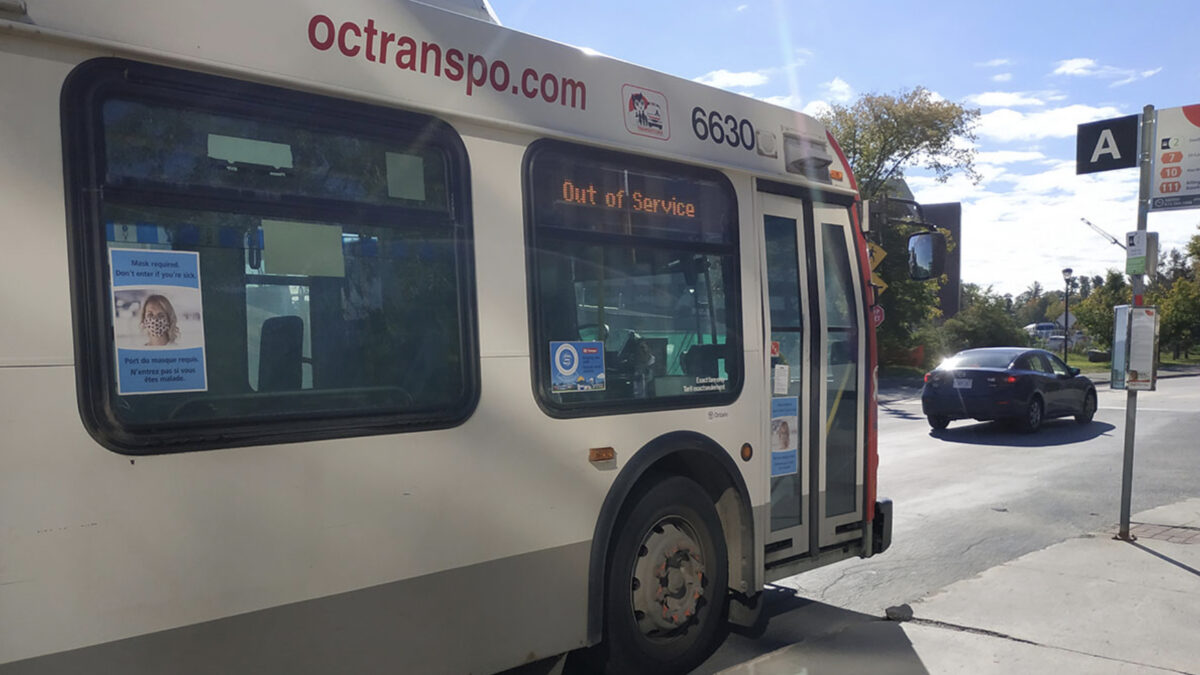 The city's transit commission has approved a freeze on fares until the Confederation Line LRT service is fully operational. All transit fares are also free in December in what Transit Commission chair Coun. Allan Hubley called a gesture to acknowledge the "hardship" transit users have endured this year. [Photo © Tamanna Khan/Capital Current]
News

Transit customers in Ottawa are getting some breaks from city council and OC Transpo after a prolonged LRT shutdown and various disruptions to bus service: a fare-free month of December and postponed fare hikes afterwards until the Confederation Line light-rail system and 15 trains are fully operational.

As winter looms and temperatures outside drop to freezing, transit costs will do the same after next month’s commuter freebie — with fares for train and bus services frozen until the LRT is ramped back up to normal service levels.

These decisions were taken with the backdrop of a provincial inquiry into the light rail project announced by Transportation minister Caroline Mulroney. A recent CBC report shows that the city was aware of serious problems with LRT in the days leading up to the launch of the system in 2019.

City council has previously ruled out an inquiry, instead asking the auditor general to review of the project.

The benefit to transit riders was one of several motions carried by Ottawa’s Transit Commission on Wednesday.

With transit ridership in October at 41 per cent of 2019 numbers, the city is working to make transit a more attractive and affordable option for local residents.

Concerns about accessibility were also raised during the meeting, with Ottawa Transit Riders board member Laura Shantz pointing out the importance of the city doing more to encourage the use of transit by families.

River Coun. Riley Brockington’s motion to raise the age limit for free transit from five years old to seven garnered support from Shantz, but was referred to city council for further review.

Somerset Coun. Catherine McKenney tabled motions Wednesday, including one to freeze fare increases for several years for OC Transpo’s community and equity passes, which are set at lower rates than regular transit passes.

The Equi Pass, which is offered to city residents who qualify under a low-income threshold, costs about half as much as a regular adult monthly pass. The community discount is available to individuals registered with the Ontario Disability Support Program.

In regards to the McKenney motion, Lucía Morales, a civic engagement coordinator at the City for All Women Initiative, was in support of the short-term fare freeze, the proposed longer-term fare freeze, and other measures to support low-income users of public transit.

“We’re glad that people using Equi Pass and Community pass will be spared a fare increase, though real equity would involve free transit for these groups, who are often paying a significant portion of their income towards public transit,” Morales said at the meeting.

Looking ahead towards OC Transpo’s future, a projection presented by OC Transpo general manager Renée Amilcar of 82 per cent ridership in 2022 compared to 2019 was considered “ambitious” by many, including Brockington.

Brockington cited a lack of confirmed return from large segments of the transit system’s user base as an obstacle to accurately projecting future ridership.

“When this budget was released two weeks ago, I asked for a memo to be released to commissioners explaining what the plan is to get public servant workers back to work using public transit, and our post-secondary students,” Brockington said. “They are two major cohorts, not the only riders, but two major cohorts who contribute to ridership. We don’t have that, and so I don’t have confidence in that 82-per-cent ridership average for 2022.”

When asked if the committee’s decision to offer a month of free fares was akin to a gimmick, Kanata South Coun. Allan Hubley, chair of the city’s transit commission, offered his take on the gesture’s value.

Blockchain, NFTs and the future of the metaverse: 'Literally no limit' as Facebook/Meta charts new course