2 weeks ago 0 1 min read
We use cookies to provide a personalized experience for our users. By continuing to browse this site, you give consent for cookies to be used.
Got it!
Home > News > Social Issues > On the same page: Ottawa school board seeks the path to reconciliation with Indigenous students 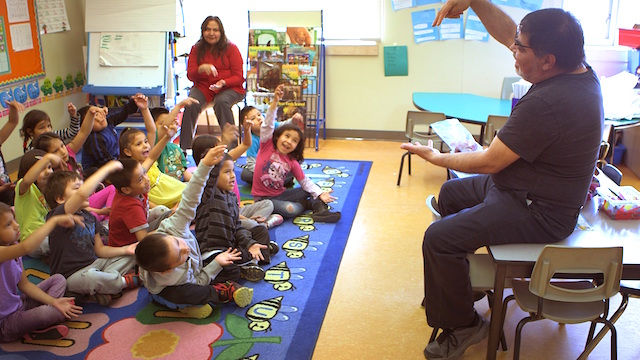 On the same page: Ottawa school board seeks the path to reconciliation with Indigenous students

When Ganaaboute Gagne walks through the doors of his high school each morning, he is unsure whether he will be a teacher or a student that day. The 18-year-old Indigenous student and youth advocate says that he often feels responsible for bringing his culture into the classroom.

“We’re labelled as Indigenous and therefore we’re told to teach our history classes,” says Gagne. “We get those Indigenous opportunities but we’re kept there. We’re kept as that Indigenous quota.”

Gagne says that although he’s had many positive experiences at his school, he has had racist comments directed at him from his peers and teachers. He says he has been threatened, physically assaulted and cast out because of his race and activism.

Gagne’s story is not an outlier. And it is soemthing that the Ottawa-Carleton District School Board (OCDSB) is seeking to address. As an example, the school board said in its 2017-2018 annual report that 95 per cent of staff who participated in a professional development session gained knowledge of Indigenous history and 86 per cent had increased their knowledge of contemporary Indigenous issues.

This growth in awareness can be attributed in part to equity efforts on behalf of the OCDSB, including its expansion of learning opportunities for students. The annual report identifies a new English credit based on Indigenous writers that will be offered in nine secondary schools.

Incorporating Indigenous culture and history into education has become a focus for many school boards across Canada. The efficacy and follow-through on these promises, though, are the subject of intense debate among students, teachers and experts. One thing all seem to agree upon is the importance of art and literature as keys to progress.

“Art and art forms, painting, songs and stories have a way of transcending the barriers that we put up between ourselves,” says Gagne.

Nancy Henry, who works with schools in Ottawa to coach them in Indigenous education, says she encourages teachers to include Indigenous perspectives, history and contemporary issues in class.

“It feels sort of urgent to me that we make sure that we don’t have any more Grade 12 students graduating who know nothing about the Indigenous perspective and history and contemporary issues in this country,” said Henry.

She added that education will play a large, foundational part in reconciliation. In its 2015 call to action, the Truth and Reconciliation commission called on the federal government to develop culturally appropriate curricula.

“It really is one heart at a time and that’s a challenge because it’s a lot of hearts we have to touch,” says Henry.

in Ontario, the move toward reconciliation through education comes as the Ford government has said it would cancel a impending curriculum change that would acknowledge residential schools and teach Indigenous languages in Ontario. Education Minister Lisa Thompson said this was a cost cutting measure.

In 2018, the OCDSB found that Indigenous students did not fare as well as others in an equity measurement report that compared the Education Quality Accountability Office (EQAO) test scores. They found that gaps between those groups of students have been widened across most assessments, so their primary focus is on closing those gaps.

But focusing only on test scores may not be enough. Carmen Robertson, a professor at Carleton University who specializes in Indigenous art history and expressions of Indigenous identity in contemporary culture, believes that the representation of Indigenous culture in school is crucial to creating a harmonious learning environment.

Robertson says she’s seen a lot of improvements in recent years and the changes are helping Indigenous and non-Indigenous students to realize the power of Indigenous culture.

“That sense of being represented, seeing a curriculum that is meaningful to them, that’s being taught in ways that value Indigenous ways of learning it’s a big step forward,” says Robertson. “Although there’s work to be done it’s encouraging to see people embracing this movement.”

The OCDSB is now focused on Culturally Relevant and Responsive Pedagogy (CRRP) which incorporates student identities into curricula. For example, one way Indigenous culture is being acknowledged is by bringing Knowledge Keepers into the classroom.

“I think it changes the atmosphere for everyone in a learning setting,” said Robertson. “It’s an acknowledgement of different knowledge systems and storytelling practices that shift the way we think about teaching and learning.”

Knowledge Keepers come into schools to share stories and lessons. They are widely regarded as being valuable members of the educational community. Henry and Robertson both say that Knowledge Keepers are fundamental to transforming the classroom into a space of acceptance, positivity and growth. Gagne says that while they are important, he wants to see teachers have this knowledge too.

Knowledge Keepers might demonstrate smudging, traditional dancing, or tell origin stories. They are seen as being the cultural authority on Indigenous education and teaching practices.

Storytelling is one of the most important elements of a Knowledge Keeper’s contribution to the learning environment because it brings colonial and Indigenous learning styles together.

“To become a reader is kind of like to enjoy a movie,” says Bouchard, a Métis public speaker and author. “You have to see yourself in it, if you can’t relate to it at all it’s somewhat harder. So I’ve said forever that Indigenous people need books in which they can see themselves.”

Six of Bouchard’s titles are featured in the OCDSB elementary curriculum, including Nokum is My Teacher and The Drum Calls Softly. He collaborates with Indigenous artists for illustrations and often includes CDs for songs and audiobooks in Indigenous languages.

Bouchard says that the work he does, along with the work of other authors and artists, is a big move towards reconciliation. He says Indigenous storytellers have been focused on this since long before the TRC released its 2015 report.

“Truth and reconciliation requires trust,” says Bouchard. “And when it comes to something like a book or a story that’s a little less threatening. It’s a way to share culture without overstepping any boundaries or offending.”

Indigenous spaces within schools can be centres for learning, but they can also become safe havens for students who want to escape what they feel is the cruelty of the traditional school environment.

One of those spaces in Ottawa is a lodge for Indigenous students at Gloucester High School. This space, according to Henry, is meant to provide a safe and secure location for Indigenous students to partake in their culture through smudging, beading and traditional games and dance. This lodge is unique in Ottawa, though there are some other Ontario schools that permit smudging.

Gagne is adamant that although there has been great progress, there is still a long way to go before he feels satisfied. He says teachers and administrators need to fill the gaps in their own knowledge of Indigenous history and issues.

At his school, he said, there is an English class called Native Studies Literature, which can replace the compulsory Grade 11 English credit. He says that while the title sounds great, in reality, the class forces Indigenous students to confront intergenerational trauma and does not accurately reflect his culture.

“We have to move away from this issue-focused learning,” says Gagne. “Take the English class you already have and intertwine Indigenous literature with that.”

Gagne says that literature and art are essential to making progress for Indigenous representation in educational spaces. He says schools should meld different aspects of Indigenous culture into appropriate subjects to show that Indigenous people are more than their past.