4 days ago 0 6 min read
We use cookies to provide a personalized experience for our users. By continuing to browse this site, you give consent for cookies to be used.
Got it!
Home > Arts & Culture > Ottawa Art Gallery showcases uOttawa student works despite challenge of the pandemic and the convoy occupation 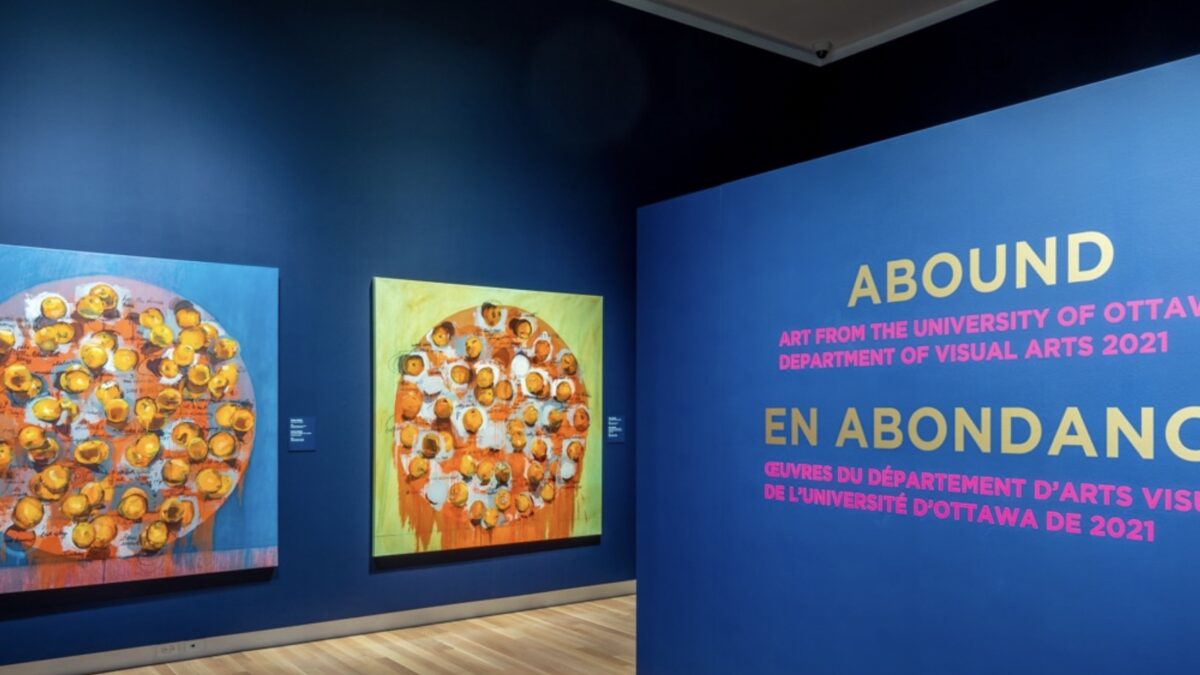 Though its opening was delayed by two weeks because of the occupation of downtown Ottawa by the "Freedom Convoy" truckers, an exhibit feature students from uOttawa's Department of Visual Arts opened Feb. 23 at the Ottawa Art Gallery. [Photo courtesy of Ottawa Art Gallery]
Arts & Culture

Amid the backdrop of a city-halting occupation in downtown Ottawa that had closed businesses and drawn the ire of residents, the Ottawa Art Gallery and University of Ottawa declared that the show must go on.

Each graduate had a chance to display pieces of their own creation that they’d been working on during the two-year master’s program. Graduates also had a chance to meet with mentors who help guide young artists towards finding a career in the field.

Abound was originally supposed to open on Feb. 9, the end of another provincial stay-at-home order, and run until March. 6. But the gallery decided to push the exhibit’s launch back due to the convoy chaos nearby, while still closing on the original end-date.

On Feb. 14, prior to the exhibit’s delayed opening, the Ottawa Art Gallery, Ottawa School of Art and other local arts organizations released a joint statement condemning the trucker mayhem, calling for the “freedom convoy to end their occupation of Ottawa’s downtown core immediately so that we can open our cultural organizations to a community in need.”

“It’s just an incredible opportunity for our grad students to show off their skills. Having your work on display in an art gallery is a very big deal for a young artist.”

The statement added: “We stand in solidarity with all those who have been so deeply impacted by this, particularly marginalized and racialized community members.”

Despite the trucker occupation, Abound went on. The chance to get out and visit a gallery after two long, pandemic-filled years was exciting, and few were more engaged than visual arts professor Lorraine Gilbert, program director of the uOttawa Master of Fine Arts program.

“It’s just an incredible opportunity for our grad students to show off their skills,” said Gilbert.  “Having your work on display in an art gallery is a very big deal for a young artist.”

Stacy Ernst, an art history professor at Carleton University, said she was encouraged by the gallery’s collaboration with young artists.

“It is really exciting to see this partnership with students and the OAG,” said Ernst.

Abound was an exhibit with no central theme. Instead, it was a chance for the artists to express themselves however they chose.

“When you have a show like this without a main guiding theme, that’s where the curator’s job really becomes interesting, and they have a lot of creative freedom with using the space,” said Gilbert.

The show was curated by Master of Fine Arts graduate Marianne Brown, along with Rachelle Dickenson, the senior curator for the Ottawa Art Gallery. The curators decided on a lineup that consisted of works from Angelina Barrucco, The Cat Attack Collective, Natalie Bruvels and Tomson, Erin Fyfe Donnelly, Peter Kohut, Lily Koltun, Jenny McMaster and Laura Paolini.

“United by a sensitivity to materiality, process and content, Abound showcases each artist’s flourishing aesthetic and theoretical engagements, along with their contributions to their respective fields,” Brown and Dickenson wrote in a joint statement ahead of the exhibit’s opening.

As opening night drew near, there was a mixed sense of excitement from students whose works were being showcased and relief from staff.

“We were so worried obviously with everything going on with Omicron, and then this trucker protest happening right by the Ottawa Art Gallery, that we would not even be able to hold a show this year,” Gilbert said before the show’s opening. “The gallery is already extremely backed up with exhibits because of the pandemic closures, so we’re so happy that Abound is carrying on despite everything.”