4 days ago 0 6 min read
We use cookies to provide a personalized experience for our users. By continuing to browse this site, you give consent for cookies to be used.
Got it!
Home > News > Social Issues > Community activists, police unite at kitchen hub to bring food to Toronto’s vulnerable 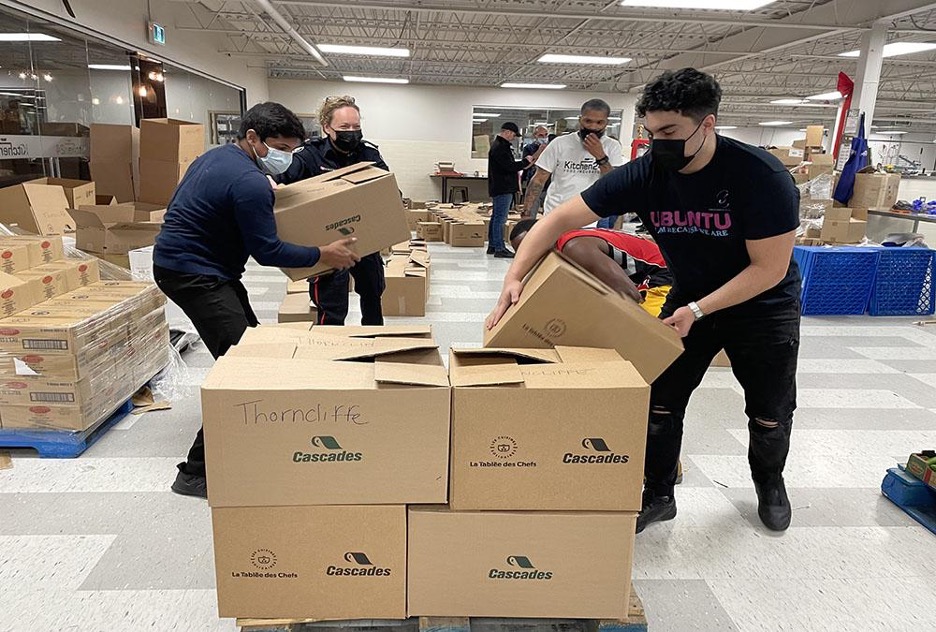 The volunteers — including representatives of the BCCC and Collective Group — gathered at Kitchen24, located northeast of Hwy. 401 and Weston Road. The commercial kitchen and event venue rents space and equipment to new businesses that aren’t ready to set up their own kitchens.

Despite the challenges faced during the pandemic, Kidron said he organized the food drive to give back to the community and help those struggling to put foot on their tables.

“I don’t know about tomorrow, but today no one goes hungry. There is enough food for everyone,” said Kidron.

Hundreds of volunteers were hard at work during the charitable mission. The crinkle of tape and echoes of laughter filled the air as dozens of police officers and members of various Toronto community groups assembled food boxes to be delivered to people in need.

Nothing else mattered as people from all walks of life circulated throughout Kidron’s commercial kitchen space,  working together to make a difference.

Kitchen24 is an architectural marvel. Designed by Kidron, no detail has been overlooked. Exposed pipes and rich wood run throughout the space.

“I don’t know about tomorrow, but today no one goes hungry. There is enough food for everyone.”

“We need more people to be like Steve. He is doing amazing work in his community and I am just so honoured to be a part of it. Steve is tackling a big issue,” said York South-Weston NDP MPP Faisal Hassan.

“People have struggled the last two years because of the pandemic. And they have especially struggled in the city’s northwest. And so it is so important that good people, like Steve, have been giving back and supporting them.”

The event attracted high-profile figures in Toronto, including Humber River-Black Creek NDP MPP Tom Rakocevic and Toronto city councillors Anthony Perruzza and Michael Thompson. Along with the BCCC and the Collective Group, the food drive involved Call4Kindness, countless good Samaritans and police officers from precincts all over the city.

“It affects almost one in five Toronto households (18.5 per cent) and is a serious public health issue because it is closely linked to negative health outcomes,” according to Toronto Public Health.

Kitchen24 and its partners worked for months to co-ordinate the event, said Jason Collins, co-chair of BCCC. Organizers saw the importance behind the food drive and felt it was their duty as community members to do something about it, he said.

“If you are fed, it’s easier to learn, it’s easier to gain skills and to look at a brighter future. It’s also an opportunity to take people out of that doldrum of wondering, ‘When will I eat next?’”

Kidron said Kitchen24 is launching a new program that will empower young people to launch careers in the food industry. He plans to train a select group of youth and give them all the tools they need to succeed. There will then be a competition in which students compete for further help to launch their planned enterprises.

Kidron said the project will be giving young food entrepreneurs the chance to change the course of their life, giving them the chance he never had growing up.

“I will give the winner everything they need,” said Kidron. “I will support them from A-Z.”

IN THE NEWS: Thursday, April 14