4 weeks ago 0 61 min read
We use cookies to provide a personalized experience for our users. By continuing to browse this site, you give consent for cookies to be used.
Got it!
Home > News > Ottawa > Ottawa artists with developmental disabilities take their creativity online 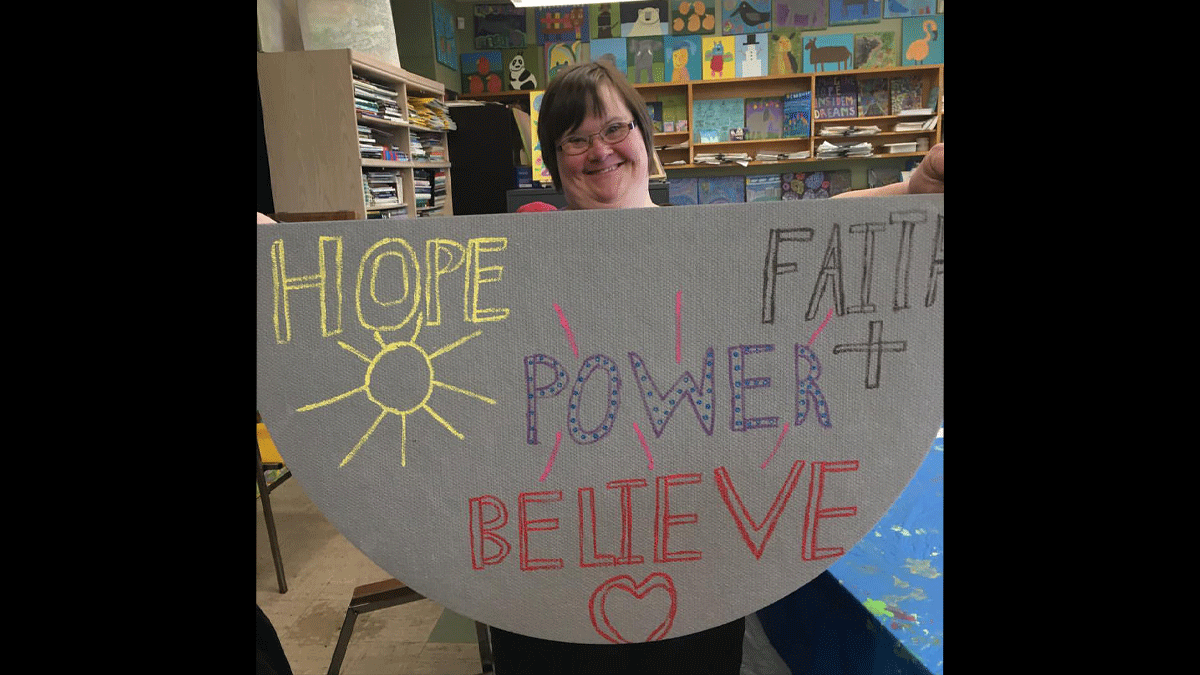 Analisa Kiskis holds a banner that captures the spirit of BEING Studio. Many artists are now thriving in the studio's digital space. [Photo courtesy ©BEING Studio ]
Arts & Culture

A unique group of Ottawa artists with developmental disabilities has been successfully staying creative through virtual activities since leaving their physical studio in March because of the pandemic lockdown.

In fact, five will have their art featured when the Ottawa Art Gallery hosts a virtual art auction from Dec. 12 to 18.

BEING Studio was founded in 2002 under the name H’Art of Ottawa. The name-change happened in 2017. The studio is a non-profit that provides artists who have disabilities with space and tools to create and representation to commercialize their work.

Since the spring, the artists, staff, families and support workers who would normally meet in the physical studio have instead worked together to create a virtual program, BEING Home, during the pandemic.

“We knew right away that we wanted to stay connected with the artists,” says Mariana Southwood, the studio facilitator and program liaison at BEING Studio. After leaving the studio on March 13, the staff at BEING Studio spent a week calling the artists to ask if they would like a virtual program. In mid-April, BEING Studio organized its first Zoom call.

“The first day put out all the doubts in our mind,” says Southwood, “As soon as everybody’s face started popping up on the screen, it was so joyful and felt so natural.”

BEING Studio launched BEING Home in April, offering facilitated chats, home art supply deliveries, and video prompts to inspire art projects from home. The staff brainstormed with the artists about possible activities. Those sessions led to virtual studio tours, meeting up with other artists, and workshops.

Southwood said the virtual program has even “opened a new world of possibilities” for BEING Studio, which allows it to collaborate with different artists and organizations across Canada, and even the United States.

In the past few months, BEING Studio has successfully hosted virtual studio tours with different artists, released a podcast series SPEAK, and launched an online shop that features original artworks, apparel and greeting cards.

“It has really been a collective effort,” says Southwood, “Our artists and staff worked together to make this incredible program and it’s constantly evolving because our artists keep bringing in new ideas.”

“It has become a natural thing for many artists to do art in front of their laptops and cameras on. So many artists are flourishing and thriving in this new way of doing art.”

Debbie Ratcliffe, the artist in residence at BEING Studio, has William syndrome, a rare developmental disorder that features mild learning or developmental challenges. She has participated in many virtual activities.

“Even though I miss my friends from the studio so much, I love being online with them,” says Ratcliffe, who specializes in acrylic painting.

Ratcliffe joined BEING Studio 13 years ago. She describes her first visit as “mind-blowing.”

“I never knew I could do art until I joined BEING Studio,” she says. “I saw all the artworks at BEING Studio and thought I have to do this. That’s a whole new world opened up for me.”

A year after Ratcliffe joined BEING Studio, she concluded that the community of artists with disabilities deserved more recognition.

“It seemed like nobody had noticed us at all; we finally put our mark on the world,” says Ratcliffe, “We are trying to let people know we are out there. And we would like them to come and see our work and see what we can do.”

In December, when The Ottawa Art Gallery hosts its virtual art auction, five artists from BEING Studio, including Analisa Kiskis, a hard-of-hearing artist with Down’s syndrome, will have their artworks auctioned.

“Art is my passion and my career,” says Kiskis, “I feel excited and a little nervous about the auction. But I have power, I have confidence, and I know I can really make this happen. I know that in my heart.” Kiskis specializes in acrylic painting and has recently discovered her new passion in digital art.

Kiskis says she sees BEING Studio as a safe place where she can use her heart, mind and soul to create art freely.

“BEING means we have a voice, a power, and we need to express how we feel,” says Kiskis, “I feel more respected and supported at BEING Studio because the staff there really help us have our power.”

Working together has been a key factor at BEING Studio and that includes the team of artists, staff, families and support workers, Southwood says.

“I would say to everybody at the end of every call that creativity is your superpower, but after a while I realized it’s about us being together,” says Southwood, “We realized how resilient we are during this pandemic. We are really hoping to communicate to the Ottawa community that BEING Studio is a diverse and inclusive community.”