2 days ago 0 5 min read
We use cookies to provide a personalized experience for our users. By continuing to browse this site, you give consent for cookies to be used.
Got it!
Home > News > Ottawa > Ottawa’s pedestrian safety needs to be more ambitious, say critics 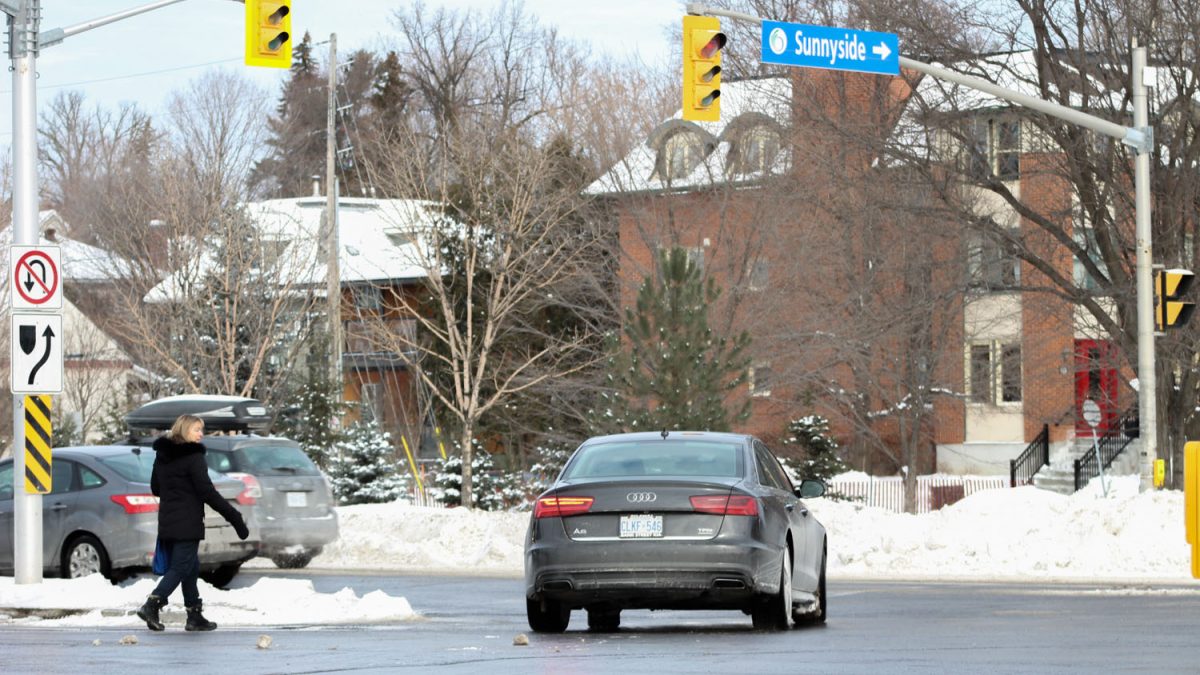 Woman crosses the Bronson and Sunnyside intersection, one of the most dangerous crossings in Ottawa for pedestrians. [Photo @ Sarah Sibley]
Driving & Cars

The City of Ottawa has lots of plans to improve pedestrian safety. The most recent — the Road Safety Action Plan — passed unanimously in December although it was not met with unanimous enthusiasm.

When initially announced in 2019, its short-term goal of reducing fatal and major injuries by 20 per cent brought a wave of criticism for being a disappointingly low bar. Erik Pervin, the office manager of Ecology Ottawa, says the city should be doing more.

Pervin says councillors should strive for a more ambitious target to ensure the safety of everyone, as these fatalities are largely preventable.

“People seem to think that people are just going to die and that’s okay. It’s sad,” said Pervin.  “But they seem to feel that it’s inevitable.”

Kitchissippi Coun. Jeff Leiper says he thought the perception of the city’s lack of ambition was actually “a failure of communication.”

“What I think the plan is, is an eyes-wide-open look at the resources that we need to allocate to the problem and sets out that we’re going to get part way along the path,” Leiper said.

The plan is in its third iteration and will be in effect from 2020 to 2024. It seeks to protect vulnerable road users including pedestrians, cyclists and motorcyclists who are most at risk, according to the 2020 implementation plan.

This plan introduces new emphasis on improving intersections, where about half of all fatal and major injury collisions occur each year.

Leiper says a major focus is simply reducing the speeds of drivers. This will be done with design features such as curb bump-outs, raised intersections and more roundabouts.

In 2019, each councillor’s annual budget for temporary traffic calming measures increased from $40,000 to $50,000. Councillors have a range of options for this money including flexible posts, pavement markings indicating speed limits, and pedestrian crossovers.

“We could tell people we’re going to get to zero in five years, but that price tag is more than we can actually afford,” said Leiper.

For example, each flex-post installation costs between $1,000 to $2,000, depending on how many posts are needed and whether the accompanying ‘Traffic Calmed Neighbourhood’ sign can go on existing infrastructure or a wooden pole needs to be installed. Leiper said he has a list of about 60 streets in his ward where he’d like to install flex-posts; after that, he said he plans to add speed bumps.

In 2018, eight pedestrians died in collisions with vehicles in Ottawa, according to the Ottawa Road Safety Report. The report also identified 360 pedestrian injuries, the highest since 2016.

Though the 2019 Ottawa Road Safety Report has not been released, there have been several pedestrian collision incidents reported this past year, including a fatal collision involving a pedestrian on Innes Road and a 13-year-old cyclist killed by a vehicle on Jeanne d’Arc Boulevard.

Karim Ismail, associate professor in transportation engineering at Carleton University, stresses the problem of collisions involving pedestrians is complicated. For example, intersections are prone to hazardous collisions because of conflicting movements between pedestrians and vehicles.

“They [intersections] are regulated by traffic signals which could be violated, or they are regulated by rules,” he explains. “A right turn has to yield for the pedestrian, but then there are blind spots and there are negligent drivers and incompetent drivers that cannot follow road rules very reliably.”

In other words, these are difficult challenges to solve.

In November, the city introduced a goal of having zero pedestrian deaths by 2035. Coining it Vision Zero, the city hopes it will encourage citizens to walk more and feel safe doing so.

Pervin says taking each unique section of Ottawa into consideration when adapting new safety measures is also important when considering what will fit the needs of pedestrians in that area.

“You have to have the flexibility to be able to tailor the solutions to the needs of different communities, otherwise, it’ll never work,” said Pervin.

Sue Neill, the chair of the traffic and safety committee for the Old Ottawa South Community Association, says the plan is a move in the right direction when it comes to protecting those who wish to take to the streets instead of opting for cars or local transit.

Neill says she hopes to see more automated enforcement mechanisms, like photo radar and red-light cameras, installed around Ottawa to try and change the behavior of drivers on local roads and ensure safe driving practices all the time.

“We understand that you can’t have a policeman on every corner trying to enforce things,” said Neill.

In addition to specific projects, the plan also aims to create what it calls a culture of road safety.

Leiper and Capital Coun. Shawn Menard pointed to funding as one of the key barriers to improving pedestrian safety, followed by the much more nebulous goal of shifting behaviours and attitudes.

Leiper says there has been a move towards priorizing safety, even as it comes at the expense of slower traffic flow. In Kitchissippi ward, Churchill Avenue has been redesigned under complete streets principles.

These principles put safety first through the addition of wider sidewalks and better segregation between different road users, with designs tailored to each location.

No formal evaluation has been completed, but anecdotally he says, the redesign has been very successful.

“Yes, I hear from some folks who feel that they cannot travel as fast as they want. But that’s the point,” Leiper said.

Menard said he would like to see a long-term trend of getting people out of their cars. He said more walking and biking lead to multiple benefits – financially, environmentally, and health-wise for individuals and for the city as a whole.

“I’d like to see a real commitment to that. I think our new official plan is starting to go in that direction.”

25th Hour: The Queen of Drag