17 hours ago 0 1 min read
We use cookies to provide a personalized experience for our users. By continuing to browse this site, you give consent for cookies to be used.
Got it!
Home > News > Ottawa > Ottawa’s unpredictable winters force the Rideau Canal Skateway to acclimate 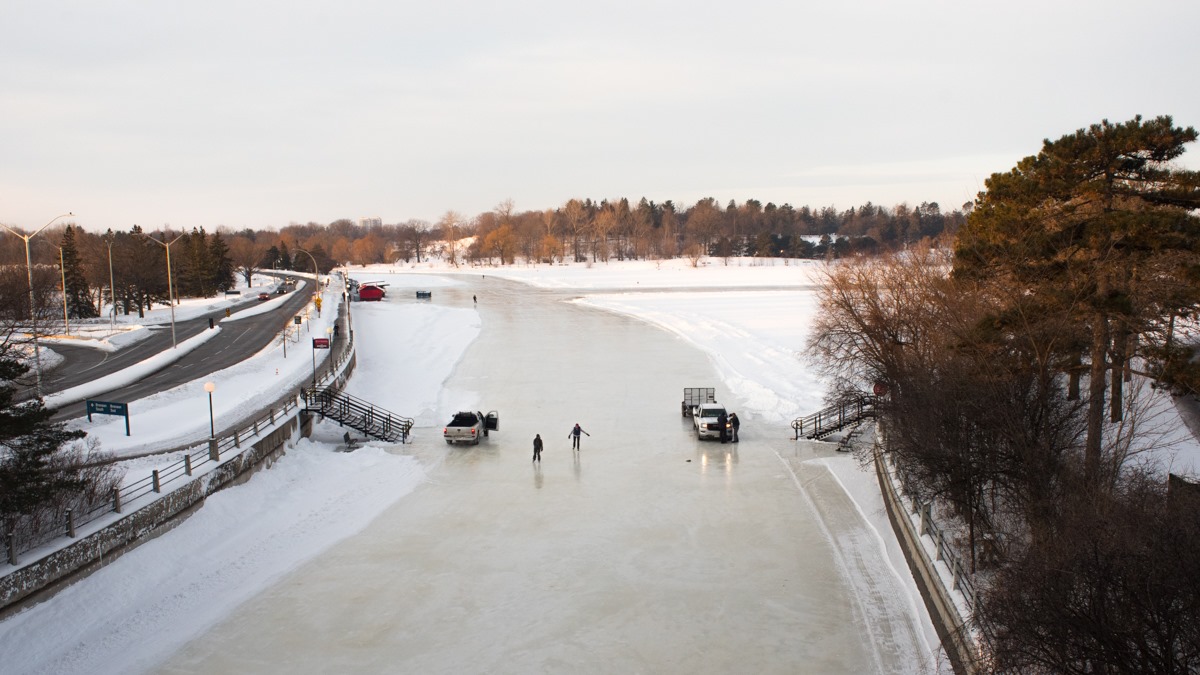 There were skaters on Dow's Lake on Jan. 22. There likely won't be any today. [Photo © Anthony Walsh]
Environment

As February approaches with the Rideau Canal Skateway still not fully open, the National Capital Commission (NCC) continues to grapple with the impact of Ottawa’s unpredictable winters and the possible impacts on tourism in the city.

On Jan. 24, the skateway was open between Waverley and Bank, including Patterson Creek, and between Bronson and Library, including the Dows Lake Loop. After a weekend of wet snow and freezing rain the canal is closed again for the time being.

Since the skateway first opened in January 1971, the 7.8-kilometre long rink has been a focal point for tourism in Ottawa.

Cédric Pelletier, strategic communications advisor for the NCC, said that skating on the canal is something that almost anybody can do. “You don’t have to be a good skater to come on the skateway,” he said.

According to the NCC, the Crown corporation that manages the canal, that number has been rising in the last few seasons.


This visualization shows the Canal’s opening dates by season, by the number of days from the first day of Winter to the first skating day.


Pelletier said the NCC has contingencies in case of warmer weather. That’s a good thing because Winterlude, which runs from Jan. 31 to Feb. 17 this year, attracts up to 600,000 people per year, according to a Government of Canada website.

In past years, many Winterlude events took place at Dow’s Lake and other sections of the canal. This year, Winterlude events are happening on Sparks Street and Bank Street instead. In part, this is a response to weather.

Amélie Desmarais, a spokesperson for Canadian Heritage, said in an emailed statement that Winterlude’s shift in focus is to ensure it remains a flagship event for winter tourism in Ottawa.

Julia Thomson, who works for Ottawa Tourism, said Winterlude organizers are also attempting to make the event more regional. (Ottawa Tourism promotes Winterlude and the canal, but Canadian Heritage is the organization that runs Winterlude.)

According to Pelletier, the NCC is aware that the canal can potentially open much later now because of warmer average temperatures in December and January.

Pelletier said the warmer temperatures have also affected how the NCC prepares the canal for skating. Previously, for example, the canal froze naturally. Now, contractors employed by the NCC divert warm city water, which drains into the canal, to the deepest parts in order to minimize effects on surface ice.

While the skateway has seen some variation in openings since its first season in 1970-71, Shelly Scott, who was skating the canal on a recent Monday, said she has noticed the effect Ottawa’s unpredictable winters has on the Canal’s opening dates.

But she said last year was “completely different.”

“It was good last year … It’s unpredictable now, whereas it used to be we’d have lots of snow all winter,” she said.

In 2018-19 there was a season length (the number of days between the official opening and closing) of 71 days, with 59 actual skating days.


The Canal’s season lengths since 1996, by skating days and total number of days. The 2018-19 season saw a jump from the previous three seasons.

This visualization shows average Ottawa temperatures in January and February.