1 week ago 0 1 min read
We use cookies to provide a personalized experience for our users. By continuing to browse this site, you give consent for cookies to be used.
Got it!
Home > News > Ottawa > New central library design welcomed by the public 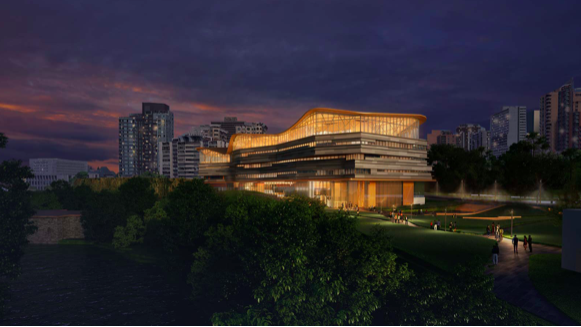 The design for the new Ottawa Central Library was revealed Thursday. [Photo courtesy of the City of Ottawa]
Arts & Culture

Ottawa’s new central library will have a green roof, a recording studio, dozens of meeting rooms, a sky high restaurant, views of the Ottawa River, a dedicated Indigenous space and a massive interior atrium.

These are just some of the features of the new building. The public got a look at the five-storey design Thursday in a packed reveal at the Ottawa Art Gallery. The new facility, which will be shared with Library and Archives Canada, uses materials sourced locally such as Ontario limestone and hardwood.

The new building will cover 216,000 square feet and will be located at 555 Albert St. on the western edge of LeBreton Flats, just west of downtown.

Residents who attended the public unveiling of the design at the Ottawa Art Gallery seemed largely pleased with the design.

“I love the exposure to the outside, the linking of the lines of the exterior to the waterfront, and the feeling that the waterfront will be more open to us, whereas it’s generally been more closed to us in Ottawa,” said Jean Beaudet, a resident who says she often volunteers with the Ottawa library.

“It’s fantastic. They’ve done a brilliant job,” said Wanda Kowalski. “It’s a structure that is quiet and not ostentatious. The setting is beautiful, with its curved roofs, it fits right into the landscape.”

The $192.9 million-project is a partnership between the City of Ottawa and Library and Archives Canada.

The cost of the project not including the two-storey parking garage is $174.8 million. Of that cost, the city is covering $104.2 million, while the federal government is picking up the remaining $70.6 million.

The design for the building comes from architecture firms KWC and Diamond Schmitt.

“Libraries have sort of taken on that role of community crossroads, and so as an architect, to design a facility that’s so important for the community, it’s a great opportunity,” Don Schmitt, one of the lead architects, said.

Schmitt said it was difficult to say what his favourite aspect of the design is, but said he expects the view from the upper levels to be particularly stunning.

Planning for the new central library began in 2015, when the city decided to move to a new building rather than renovate the current central library on Metcalfe Street. Library and Archives Canada joined the project in 2016 as it looked for new space for its records.

The city said the design was the result of extensive consultation with residents.

“I think the greatest thing about the design is that it reflects the community’s desire and input into the design,” said Alain Gonthier, the director of city’s infrastructure department.

“When we started with the architect team, we didn’t come up with a design and then present it to the public,” Gonthier said. “We actually started with the public without any designs, and really seeking input on what they wanted to see out of their library.”

Gonthier said the public reaction so far has been positive.

“The comment that we seem to get is that it’s very appropriate for Ottawa,” Gonthier said. “I think the design really respects the site,” which he said takes advantage of the view over the Ottawa River.

The design includes wide glass windows on the upper floors to provide that view, which concerned some residents at the design unveiling over the threat of birds flying into windows. However, Gonthier said the city has plans to minimize the problem.

“The design of all of the windows have measures which will prevent bird strikes,” Gonthier said. “We are very aware of those concerns and that’s built into the design.”

Gonthier said the glass of the windows will be covered with minute polka dots, which help birds recognize the glass as a solid object, while still allowing natural light to flow through.

For transit users, the library is close to the Pimisi station on the Confederation Line, as well, it is served by bus. There will be a two-storey parking garage beneath the library.

Construction is expected to begin in about a year. The new building will open in late 2024 or early 2025.

Putting a ring on a life's story