4 weeks ago 0 61 min read
We use cookies to provide a personalized experience for our users. By continuing to browse this site, you give consent for cookies to be used.
Got it!
Home > News > Canada > Ontario > Pride flag won’t fly in Petawawa because of Resolution 11, council decides 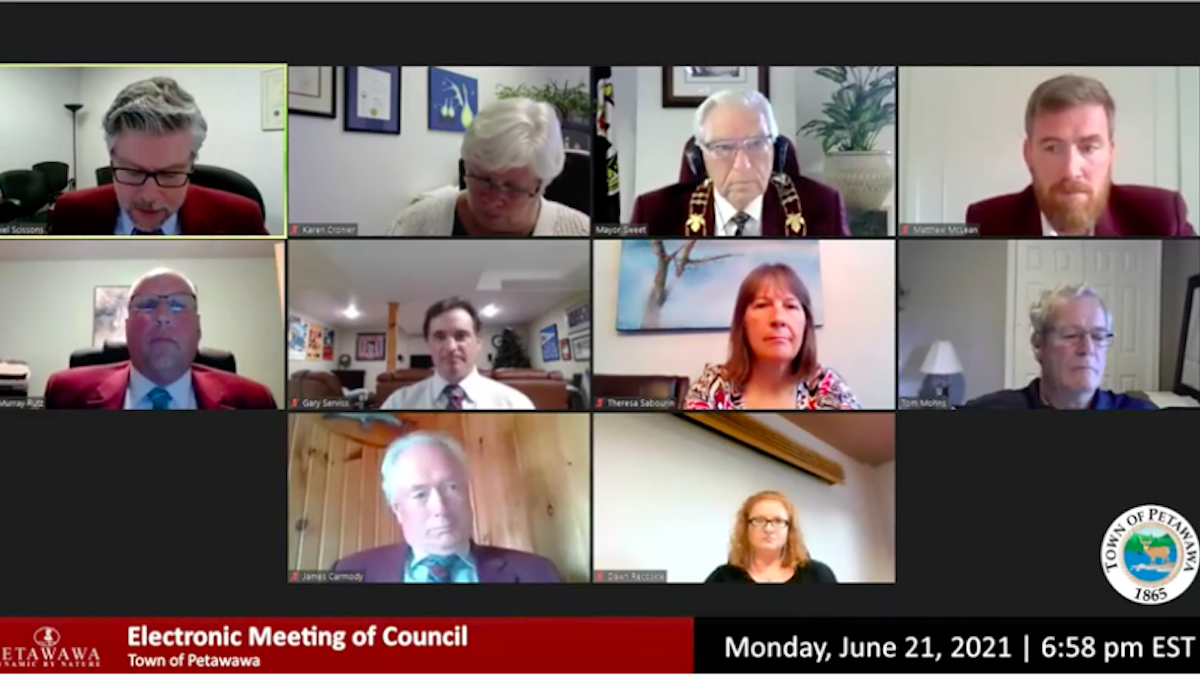 A motion that would have allowed the Pride flag to be flown by the Town of Petawawa has been denied, despite a majority of councillors voting in favour.

A 23 year old resolution and the need for a two-thirds majority means the flag won’t be flown in the town by the town for at least another year. Residents and other institutions such as schools are able to put one up, but not the town, making it the only municipal body in Renfrew County that isn’t flying a Pride flag during Pride month in Ontario.

Resolution 11 states that the Town of Petawawa declines to make any public proclamation.

Sweet says the vote, as far as he’s concerned, was not about denying the Pride flag. Instead it was about upholding Resolution 11. He said he has struggled with a decision on this for weeks.

“This is a simple policy, but it’s an all-encompassing policy which simply says we do not declare any proclamations, including the flying of flags,” Sweet says. “It was never a debate about the flags, but a debate about the policy and it went beyond that.”

Jennifer Neville is a teacher in the area and a Petawawa resident, who started a gay-straight alliance in her school. She originally brought the idea of flying the Pride flag to council after discussing the idea with her students. But her proposal, after a presentation to council in early June, was rejected. Neville also launched an online petition that had 792 signatures by Monday afternoon. A local activist group wrote council, accompanied by statements from LGBTQ2S+ supporting a flag.

“We’ve talked about what they (the students) would like in the community and how would they be made to feel this, and this (flying the Pride flag) just came up,” Neville said. As a result the vote Monday, along with the original rejection, has been “very disheartening.”

The motion was introduced by Deputy Mayor Serviss.

He says he thought it was time to revisit the policy and amend it to give the council the flexibility to make exceptions.

Serviss also said in a statement to Capital Current that he believes that Petawawa is an inclusive and welcoming community but he believes there is room for improvement.

“Sometimes a small gesture, like raising a flag, goes a long way in demonstrating a commitment to equity and inclusion. A small visual gesture shows that we care, that we welcome, and we support diversity and inclusion,” Serviss said.

“They’re more than welcome to be part of our community and I hope they are. … I understand they feel that by flying a flag that makes (the community) inclusive. … Surely there is another way of doing that to make them feel welcome,” Sweet says.

Johnathan Frampton, who is an LGBTQ2S+ citizen of Petawawa, called the vote disappointing. He said he believes that for LGBTQ2S+ youth growing up in a more conservative small town, it’s important to have representation.

“It makes a big difference for queer youth growing up in Petawawa and other small towns around Petawawa,” Frampton says. “There’s a reason why myself and so many other queer youth wait until they go away to school to come out or wait so long – because there’s not much representation of support for the queer community in the Ottawa Valley.”

He adds that it is going in the right direction, especially with the local school board and Garrison Petawawa, the nearby Canadian Forces base, flying the Pride flag.

Because of the rules governing such votes at council, the motion can’t be revisited for a year but for supporters such as Neville and Serviss, the fight isn’t stopping.

“I’m not letting this go. It’s just such a small thing but it speaks volumes,” Neville says.

“We’re not giving up, not letting go and there can always be support coming from the community side… this is still an issue that’s important to them and they would still like to see it changed in the future,” Serviss says.