3 days ago 0 4 min read
We use cookies to provide a personalized experience for our users. By continuing to browse this site, you give consent for cookies to be used.
Got it!
Home > News > Ottawa > Reconciliation in action: Ottawa teen helps families in a Rwandan village sustain themselves 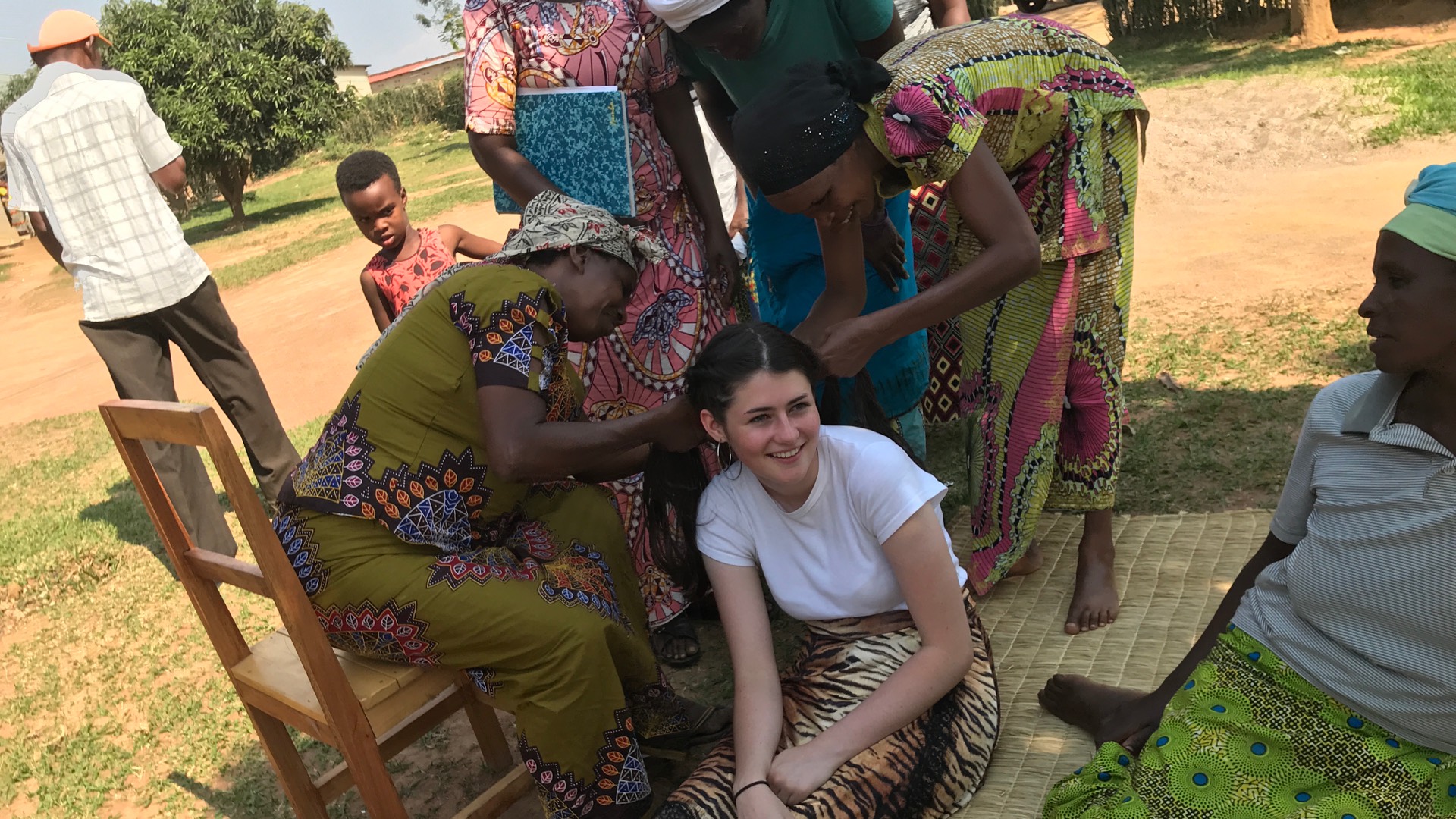 Reconciliation in action: Ottawa teen helps families in a Rwandan village sustain themselves

When Ottawa teenager Ella Vincic traveled to a reconciliation village in Rwanda this past summer, she knew she wanted to find a way to stay connected with the people she met there.

“The whole trip I actually wanted to make a connection with people,” she said. She finally had that chance when they visited Bugesera, a reconciliation village where 52 families live.

Rwanda has several of these reconciliation villages, where surviving victims and repentant perpetrators of the 1994 genocide live next to each other as neighbours.

Vincic, who’s 17 and in Grade 12 at Glebe Collegiate, had travelled to Rwanda with her parents and older brother. When they visited Bugesera, Vincic got a chance to spend time with families there, and after leaving she wanted to find a way to stay in touch.

Once Vincic returned to Ottawa, she began creating crafts to fundraise for the people she’d met. Now she’s raised enough money to buy several cows, which will help families in the village sustain themselves.

Vincic and her family spent nearly a week in Rwanda, and one of those days in Bugesera. They traveled with a guide, and that day they visited two churches that were sites of mass murder during the genocide.

“When I told my friends about it, most of them didn’t know there was a genocide in Rwanda,” Vincic said. “They didn’t know what had happened.”

They didn’t learn about it in school, she added, apart from a brief mention in a course.

Vincic and her family visited other memorials as well, where clothing from people who had been killed was laid out in rows. One of the things that struck her most was a child’s shirt with ‘Ottawa, Canada emblazoned across the front.

When they got to Bugesera, Vincic remembers how everyone had come out to greet them, and then many of the kids performed prepared dances. Everyone was smiling and laughing.

After the performances, two people who lived in the village spoke to them about their experience in the genocide. With their guide translating, they listened as a woman explained how she’d lost her entire family, including her children. Then a man spoke about how he’d killed his neighbours in the genocide, something for which he’s trying to make amends. The reconciliation villages are meant to bring people from both sides of the genocide together to create a more peaceful future.

“It was definitely upsetting hearing them,” Vincic said. “But I was impressed that even though this happened, everyone’s together.”

“The juxtaposition between the dances they just did, and then somebody telling you he killed a family,” she said. “They shouldn’t mesh, but they did, I guess.”

Thirty years ago, conflict between the Tutsi and Hutu people in Rwanda was rising. When a Hutu-controlled government took over in 1990, many Tutsi people fled the country, escaping to neighbouring countries, while those who stayed behind formed a rebel group called the Rwanda Patriotic Front (RPF).

The slaughter of thousands was triggered in April 1994, when the plane flying Rwanda’s then-president, who was Hutu, was shot down, killing everyone on board.

The Rwandan genocide went on for 100 days, and during that time, 800,000 people were killed. As stated by the BBC, “neighbours killed neighbours and husbands ended up killing their Tutsi wives.” Roadblocks were set up in the country to stop and check people’s IDs, which stated their ethnicity. These stops were a way to kill more Tutsi people. Tutsi women became sex slaves, the radio was used as a way to broadcast a hit list of important Tutsis to kill, and newspapers were circulating hate propaganda, according to the BBC.

The UN had forces in Rwanda, but no orders were given to stop the killings that were happening. The RPF and Uganda’s army ended up getting the country under control again, ending the genocide in July 1994. In 1999, the UN general secretary at the time, Kofi Annan, requested three people outside the UN to assess the UN’s involvement in Rwanda. The report was released in 1999 and said that the UN had failed to acknowledge evidence of a planned genocide and had failed to act appropriately.

In Rwanda today, there is peace between the Hutu and Tutsi people. However, the genocide is still a highly sensitive topic.

During their day in Bugesera, Vincic and her family spent time cooking and weaving baskets with people. She and her brother showed some of the kids their phones, and they were fascinated by the SnapChat filters.

At one point someone started braiding Vincic’s hair, and before she realized what was happening there was a whole group of women crowding around watching and talking. “I didn’t know what they were saying,” Vincic said with a smile, “but I was having fun.”

While she was still in Bugesera, Vincic realized she could help give something back to the people she’d met.

For the last five years, along with two of her friends, Vincic has organized a holiday craft sale in her Ottawa community. The three spend months creating original crafts, and then have an afternoon sale to raise money for different charities.

This year, Vincic wanted to fundraise for the families she’d met in Bugesera.

“I feel like everyone in the village just kind of stopped what they were doing and put on like this extravagant welcome for us,” Vincic said. “I think our presence was probably really exciting for them, but they went really above and beyond to make us feel welcome, and welcome us into their lives.”

Since Vincic will be attending university outside of Ottawa next year, she knew it was going to be the last year she’d run the craft sale. She wanted to “do something personal this year,” she said, and make the last year special. “It fit perfectly.”

Throughout the fall, Vincic and her friends worked to create hundreds of items, including greeting cards and hand painted wooden ornaments. Then they invited their family and friends to the craft sale in early December.

The community event raised almost $3,000. That was more than any of their previous sales.

“I was really really pleased,” Vincic said. “It was kind of like a thank you present.”

“I was so excited,” Vincic said. “Five or six seems like quite a bit.”

The ceremony to present the new cows to families will take place in April and will be organized by David Mugisha, a local guide with Wildlife Tours Rwanda, who accompanied Vincic and her family to Bugesera. He is also helping co-ordinate the transfer of the cows to the new owners.

He said a cow is a very helpful resource for families to have.

For many reasons cows are “very important,” said Mugisha. “One, they help with nutrition because they give milk. Two, it gives (people) manure for their farms or their gardens. Three, it guarantees you can get credit and it helps your status in the community.”

The reason owning a cow elevates an individual’s status is because it represents so many good things, said Mugisha. It represents prosperity and resourcefulness, since it has many uses, he said.

According to Marie-Eve Desrosiers, a professor in the School of International Development and Global Studies at the University of Ottawa, there is a cultural significance for a family to own a cow in Rwanda. “The family would get the benefit from the cow for its milk, and so it enriches that family and gets passed on,” she said.

Desrosiers said that, to some extent, this act is a form of reconciliation and broader forms of social development because of the tradition it has for families in Rwanda. “Cows have traditionally been seen as a great wealth for Rwandans. It is believed that some wealthier Rwandans could give a cow to a family who could benefit from its milk.”

The Rwandan government has used this tradition by implementing a program called Girinka, Desrosiers added, in which the government gives a cow to a poor family to help bring them food and a way of employment.

Mugisha said that cows have such high social and material value that they are often used in a marriage dowry, thus adding to their significance in the community’s culture.

In order to decide which families would get the cows, Mugisha said they looked at numerous variables. These included the individuals’ sources of income, how big their family is and who would benefit the most from having a cow. The person must have a place to keep the cow and they must be able to do any work involved with feeding and taking care of the animal.

For many in the community it would be difficult to earn enough money to purchase a cow. However, the money that Vincic raised is enough to purchase five to six cows, said Mugisha.

The purchase will happen within the next month and some time in April the village will have a ceremony to celebrate the villagers receiving the animals, he added.

“There will be dancing and singing. We will bring the district leadership, the elders and there will be some speeches to appreciate and thank the people who are involved in this, and then we will go see where they put the cows and then we will share drinks and food. It will be a ceremony,” he said.

Mugisha said he is very thankful for Vincic’s visit and donation, but he added that the community gained more than just cows.

“It is sort of special to see visitors … There was cooking, dancing and telling stories and sharing life experience,” said Mugisha. The locals “still talk about it.”

“I’m just excited to get an update,” she said. “I’m not seeing them in person soon, but to know we kind of have contact with them again, that’s the part that I’m excited for.”

She adds that she does want to go back to the village one day to see everyone again. The fundraising was part of maintaining their connection, and a way to say thank you to those she met.

“They kind of gifted us the whole day, the experience,” she said. “I just think about it as kind of like a gift back to them.”