6 days ago 0 6 min read
We use cookies to provide a personalized experience for our users. By continuing to browse this site, you give consent for cookies to be used.
Got it!
Home > Arts & Culture > Theatre > A Rocky Horror: Local theatre may lose the ​cult classic 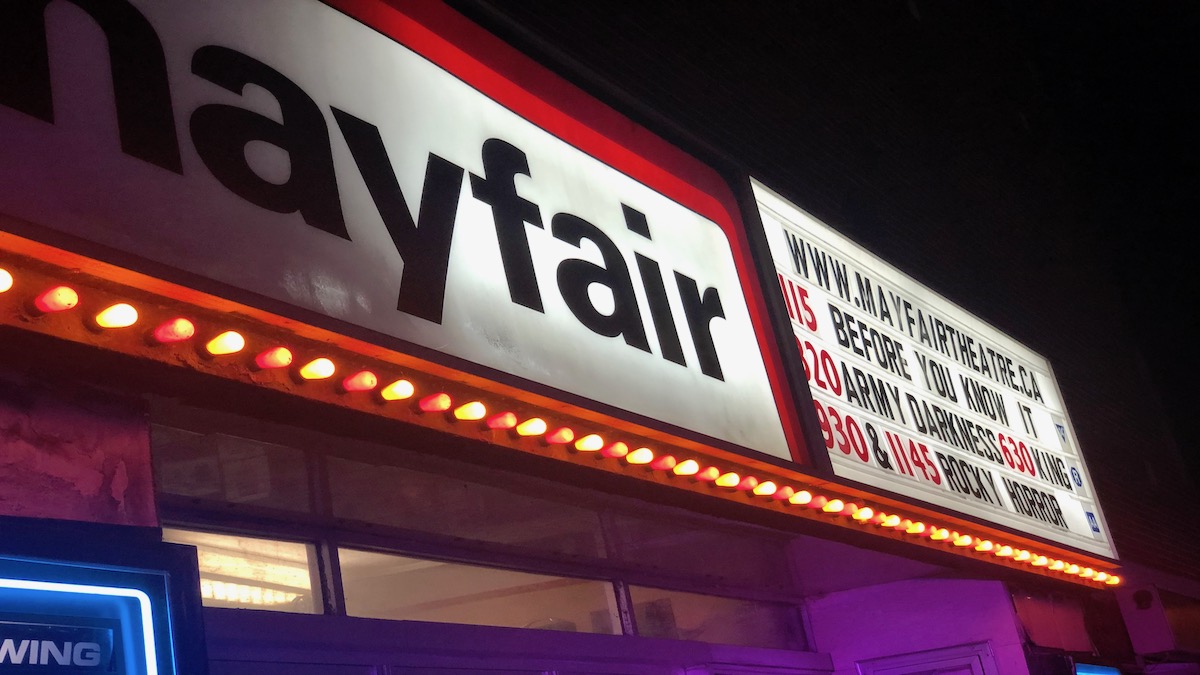 Rocky Horror Picture Show remains in lights at the Mayfair Theatre- for the rest of the year at least.[Photo © Lauren Hollis]
Arts & Culture

Ottawa’s Mayfair Theatre has been screening Rocky Horror Picture Show once a month for 11 years. In October the theatre features the show seven times leading up to Halloween.

But the tradition may be going away in the wake of the purchase of the the cult classic’s original studio, 20th Century Fox by Disney.

Demarbre programs the Mayfair and he says he believes that because of this purchase it will grow increasingly difficult to bring the film to the theatre in the new year. Typically Disney places films that were released more than a year ago in the vault and only allow them back in theatres in the midst of major anniversaries.

Some of the other people involved with the show also have their fingers crossed, including the theatre’s shadow cast.

The Absent Friends Shadow Cast performs and interacts just as much with the movie as they do the moviegoers as they recreate it live. They sing, they shout at the screen and they even go as far as spraying the audience to mimic the famous rain scene.

After arriving in Ottawa five years ago, Absent Friends cast member Megan Douglas went to the Mayfair and saw to the film. Eventually, through volunteering and auditions, she found her way to just in front of the silver screen. She claims to be in denial over what may happen to the show in 2020.

“I think I can speak for a lot of our cast when I say we have this hope that it’s not the last one, and we’re not treating it like it is.” Douglas said.

She enjoys the freedom and acceptance she feels because of these performances. She notes that before her involvement she had a lot of self-hatred prompted by trying to meet all of the expectations placed on her.

“Then, you do something like this, where you have no eyebrows, you’re wearing sequins for three hours and people are shouting vulgarities at you.” She continues, “You just kind of lose all sense of dignity — but in a good way.”

Some of the people that may be yelling at the actors include Nadia Khan, Mariel Angus and Shannon Munsie. They sat in Black Squirrel Books, just across Bank Street and reminisced about the film while waiting for the theatre’s doors to open.

“We were just talking about how none of us seen it for a very long time. One of my co-workers brought up that he went to this years ago,” Khan says, “and he’s like, have you been to the Mayfair because this is the main attraction.”

Upon that advice, she messaged Angus and found themselves prepared for the night’s festivities.

The friends looked forward to what Angus referred to as the “campiness” that the Rocky Horror Picture Show offers and were excited to enjoy the musical’s soundtrack.

“I love how the songs actually make you want to get up and dance,” Khan says.

The Mayfair, the shadow cast and the audience are all hopeful that they aren’t heading towards their final handful of shows ever. They hope to see more toast and cards being thrown and bubbles being blown and more dancing in the aisles.

Unfortunately, it may take a Time Warp to see what the future holds for the film at the Mayfair Theatre.