6 days ago 0 6 min read
We use cookies to provide a personalized experience for our users. By continuing to browse this site, you give consent for cookies to be used.
Got it!
Home > Arts & Culture > Theatre > Saying goodbye to the Bytowne underlines importance of supporting small cinemas 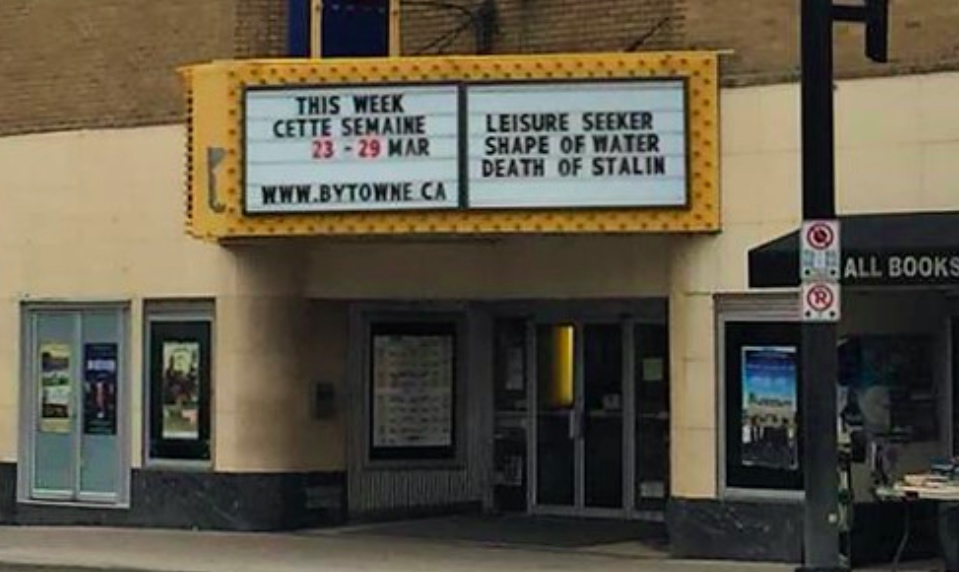 The Bytowne Cinema announced recently that it will be closing on Dec. 31. [Wikipedia Commons photo by Tealtea21]
Arts & Culture

Following news that Bytowne Cinema’s final curtain would be drawn on Dec. 31, I recalled the last film I’d seen at the Rideau Street repertory theatre. It was the 1976, Palme d’Or-winning Taxi Driver, directed by Martin Scorcese, in February — just before the COVID-19 pandemic hit in March.

Since then, I have caught several shows at Ottawa’s other independent cinema, the Mayfair Theatre in Old Ottawa South, which is operating at a fraction of its capacity to allow for distance between audience members. Despite the fact that I had only a short acquaintance with the Bytowne — a movie here, another there over the past few years — I’m eternally grateful to have entered adulthood soon enough to have experienced the venue, despite only catching the Bytowne at the end of its life.

The announcement that the Bytowne is closing only reinforced previously made calls that we must support the independent businesses in our city if we want them to be here after the pandemic ends. Local businesses are part of what makes the city worth living in — and this has been particularly true for Ottawa’s small cinemas, the Mayfair and Bytowne.

Both theatres are intertwined with cherished memories for many Ottawa residents. I only started going to the cinema when I began attending Carleton University in 2016. Although I grew up in Ottawa, I didn’t watch movies on the big screen anywhere as a kid, but not for a lack of wanting.

Culturally, my family just didn’t go to the cinema. It was seen as where people went on dates to steal kisses in the back seats, ignoring whatever was unfolding on the screen. In my family, the theatre was no place for impressionable kids, who might easily pick up the bad habits of the rascals who attended such venues.

Movies at the Bytowne, along with the Mayfair, were a luxury that came with the freedom that university afforded me. I know many Ottawa residents have decades of fond memories, some reaching back to when the Bytowne was the Nelson Theatre from its opening in 1947 to when its name changed in 1988. There are so many movie-night memories and coming-of-age milestones at these special places — but how many more?

I suspect Bruce White, the current operator of the Bytowne, and Josh Stafford, the co-owner of the Mayfair and its “resident geek,” and the others who have worked behind the scenes at these establishments are wondering the same thing right now.

It is true that the pandemic has claimed many other landmark businesses that give Ottawa’s streets their colour and character, but the announcement of the Bytowne’s closure was the first to really tug at my heart. Upon the owner’s announcement on social media that the Bytowne will close at the end of the year, the hundreds of messages of support and calls to save the theatre showed me that I wasn’t alone.

Independent theatres such as the Bytowne and the Mayfair show movies that have long since been out of rotation at major chains like Cineplex — including many favourites from decades ago. The Bytowne is known for playing independent and foreign films, while the Mayfair screens many cult classics. They fulfill different needs from the large cinemas and simply can’t be replaced by another multi-screen theatre.

I am not anti-chain. The feeling of going to mainstream movie theatres is different, but good in its own way.

But our small theatres are familiar-feeling places that belong only to the residents of Ottawa, which is partly the reason many locals see them as gems that must be protected. Who knows what the cultural changes will be after the pandemic is over, and whether sitting in close quarters with hundreds of other people will ever be a comfortable possibility again in the near future.

The fact that the Bytowne was one of a few, increasingly disappearing reminders of an intimate and community-based way of watching movies makes this loss a bigger one than usual. When it’s our very own theatre — one with a vintage, glowing sign that’s only ours — the hit is even harder.

I’m sure the thought of a non-descript building that melts into the background along Rideau Street — taking the spot that’s been occupied by the Bytowne for so long — is a sad one even for people who haven’t seen many movies there, or don’t have strong feelings about the film distribution industry.

The Bytowne’s closure announcement said that the owner is looking for a potential buyer — offering a sliver of hope for the cinema’s survival, or its resurrection at some point in the future. However, considering the state of demand for in-person film viewing today, already diminished by the rise of Netflix and other at-home streaming services — and then, dramatically, by the pandemic — I would be pleasantly surprised if this happened. Like the Bytowne’s owner said in the announcement, many factors played a part in the closure of the Bytowne.

So if the Mayfair or any other small business is important to you — and you can keep safe while doing it — it is important you do what you can now to keep them alive by giving them your business.

Because they aren’t guaranteed to stay with us forever.

Latest 'Lost Ottawa' book explores the past through shared memories