7 hours ago 0 4 min read
We use cookies to provide a personalized experience for our users. By continuing to browse this site, you give consent for cookies to be used.
Got it!
Home > Politics > Signs and the bottom line: The costs of election advertising in Ottawa 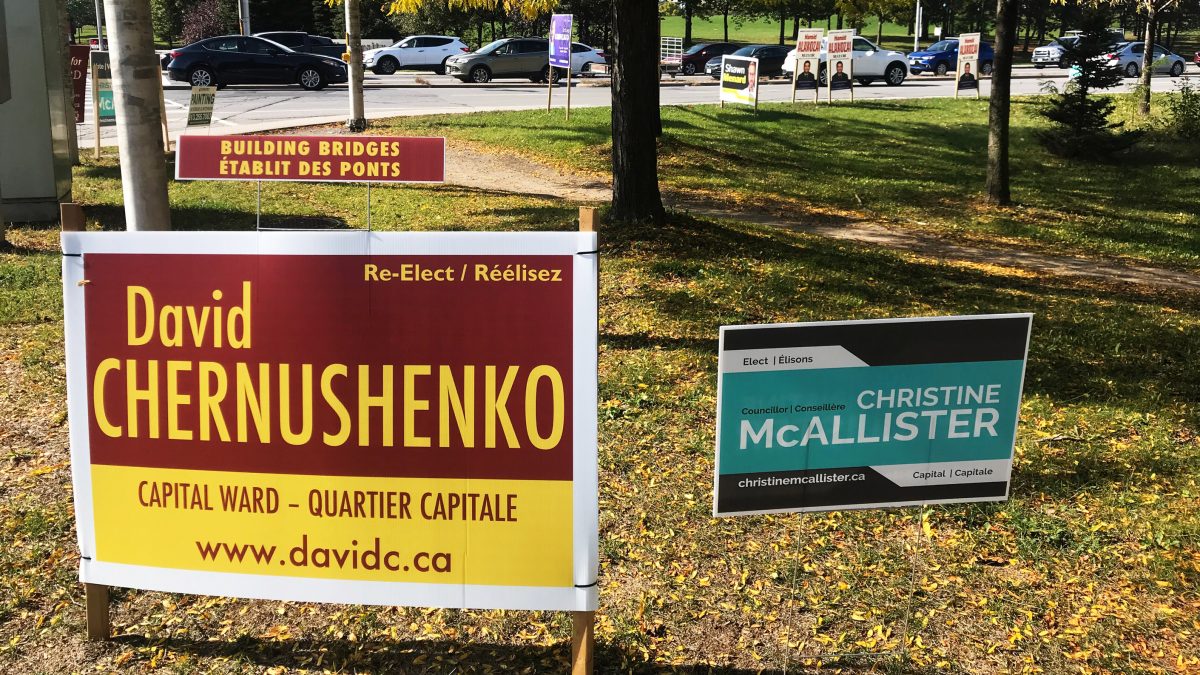 David Chernushenko's lawn sign stands among Christine McAllister and many others in the background in preparation for the upcoming election on Oct. 22. [Photo © Ebonie Walker]
Ottawa Votes 2018

While signs remain one of the more common ways to advertise a campaign, their short life spans, high price-points and wastefulness have some candidates in the Ottawa election thinking about a change.

Signs began to pop up on private property across the city on Aug. 23. On Sept. 22, candidates running in the Oct. 22 municipal election were given the green light to put their signs on public property.

For Michael Pastien, a first-time candidate for mayor doesn’t like what he sees and he hopes for increased regulations around signs.

“I’m thinking they should ban signs altogether on public property or at least I am thinking they have a real low cap on spending for advertising,” said Pastien, who ran to represent Bay Ward in the 2014 election.

The current spending limit for mayoral and council candidates is $25,000.

“If you banned the signs, you would be dependent on going door-to-door and talking to the people and maybe organizing campaign forums so that (citizens) have an opportunity to actually hear you out,” he added.

Pastien didn’t use election signs in 2014 and he isn’t using them in 2018. He believes they are too expensive and wasteful.

Depending on the quantity ordered, the larger signs commonly used on the street, cost anywhere between $14.50 to $17 each, excluding the washers and stakes. The smaller 18 x 24 inch signs, more common to neighbourhood lawns, cost about $10 less.

Anthony Carricato, one of the five hopefuls running in Capital Ward, says he has spent around $7,000 on campaign signs.

“We only get about $26,000 dollars for the entire campaign. If I am using $7,000 on lawn signs that’s seven grand I can’t use on hosting events, printing brochures or buying phone lists and databases,” said Carricato.

“It’s such an expensive cost the first time around.”

Capital Current reached out to 59 councillors to see how much each candidate spent on election signs. According to the data collected,  David Chernushenko, who is the incumbent in Capital Ward, spent about $3,000.

He said that unlike an incumbent, first-time candidates start with little or no name recognition. This makes the idea of using signs that much more attractive.

“When you’re a first-time candidate you need to get your name out there. People do see it and immediately think: ‘momentum.’ They think, ‘Oh wow, I see your face everywhere you must be doing really well,’” said Carricato.

Chernushenko, the Capital Ward incumbent, was hoping to enjoy the perks of name recognition from eight years in office. He said he was looking to go without the use of signs this time around.

“Even this time, as an incumbent and my name recognition, I thought, ‘What if I just do some sort of ribbon or material in my two colours maybe with my name on it and biodegradable’ and the response was negative.”

He says he has been flirting with this idea since he was first elected in 2010.

“I’ve always wished that we could run campaigns without election signs but every time I suggest that to friends, family and volunteers, they sort of roll their eyes like, ‘Okay, Mr. Environmentalist, good luck with that one,’” said Chernushenko.

The traditional election sign is made from a material called coroplast which is three layers of thin, polypropylene. While this material is considered recyclable, smaller polybag election signs — which are more like a plastic bag  — are not.

Cameron Neale is the program co-ordinator with the recycling and material diversion for the city. In an email statement, he said the following:

“Candidates are responsible for the disposal of their own election signs, and as such, they are not part of the city’s residential waste program.”

This requires candidates to collect any election signs that were put up during their campaigns and bring them to the city’s recycling processor — Cascades Recovery Plus — themselves.

This also leaves residents without a way to recycle their election signs, unless their candidate comes to collect them.

According to Mark Kelly, general manager of Kelly Signs in Ottawa, the traditional coroplast signs can be broken down and ground into plastic pellets, which are then recycled.

However, Kelly said he has seen a trend in using the non-recyclable polybag signs. His company says it doesn’t sell these signs because they’re not recyclable.

Eric Gille works for Pro Printers, a local sign company in Ottawa. He says while the coroplast signs are more traditional, his company can print on biodegradable materials such as wood, paper board or even kraft paper, which is most commonly used for brown paper bags.

While using these signs may be the more environmentally conscious choice, the paper material doesn’t hold up as well in Ottawa’s climate, which could increase costs.

After two elections, this is a reality Chernushenko has faced.

“I always laugh when people ask me where those signs are — they have biodegraded,” Chernushenko said.

This year, Chernushenko has ordered traditional coroplast signs. While this material can still be recycled, he said he has made a conscious effort to limit his use of them.

“I don’t believe in absolutely covering the public landscape in signs. There’s a point where people just go, ‘bleh,’ and I don’t think having 10 on a corner or lining a street does you any benefit,” he said.

Instead, Chernushenko has been exploring alternative ways to make his presence known, including through social media campaigns and canvassing his ward almost every evening.

Residents will vote on Monday and decide which campaigns, signs or no signs, have proven successful. After Oct. 22, candidates have 48 hours to remove signs from public property.