2 days ago 0 1 min read
We use cookies to provide a personalized experience for our users. By continuing to browse this site, you give consent for cookies to be used.
Got it!
Home > Sports > Skaters enjoy good conditions in canal’s opening weeks despite tightened COVID-19 rules 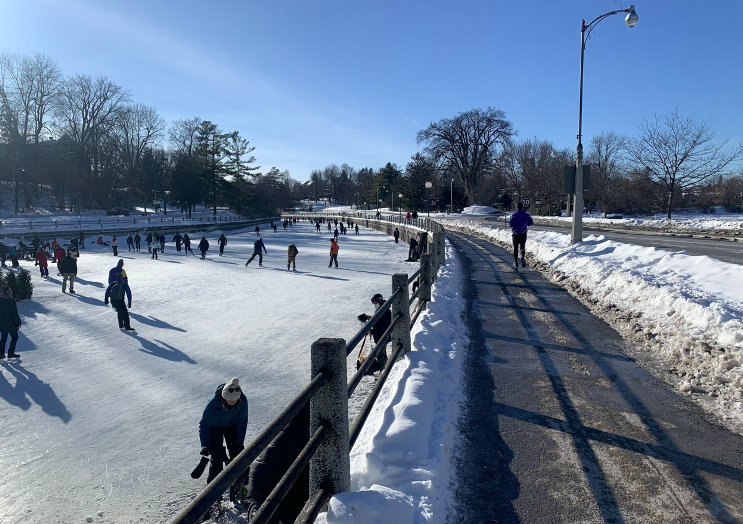 Ottawa residents have enjoyed more than two weeks of good skating since the National Capital Commission opened the Rideau Canal Skateway on Jan. 31 under modified rules because of the COVID-19 pandemic.

The NCC opened a section of the skateway for the 51st skating season on the last day of January despite concerns caused by the coronavirus emergency.

The NCC later said in a tweet that the full length of the skateway would open Feb. 2, and the canal has been in good or fair condition since then.

Because COVID-19 continues to pose a risk, the NCC is requiring skaters to wear a mask, keep two metres from others on the skateway and attempt to visit at off-peak times. The NCC is advising residents of the capital to exercise locally, meaning only those who live within walking distance of the canal are encouraged to use the skateway.

Residents of more distant neighbourhoods are being encouraged to use local parks and skating rinks, as well as the NCC’s Greenbelt trails and other recreational areas, to limit the mixing of communities within the city.

Ontario was under stay-at-home orders between Jan. 14 and Feb. 16, with Premier Doug Ford pressing resdients of the province only to leave their home for essential purposes. The provincial order allowed the skateway to open under an exception for exercising.

For this reason, “the skateway will not be a tourist destination as in prior years,” said El-Akhrass. “It will really be a space where people from the most densely populated areas of Ottawa can get outdoors and exercise while safe physical distancing.”

On the skateway’s opening day, hundreds of skaters flocked to the canal to enjoy the ice, and  even more visited over the first weekend.

“The ice is pretty good this year — much better than last year, because it isn’t as slushy,” said Carly Bradshaw, who went for a skate with her roommate.

“Since the day I moved back I’ve been waiting for it to reopen,” she said.

While opening day was a relatively quiet on the canal, by the first weekend physical distancing was challenging considering the number of people on the ice.

“Please remember to stay close to home when enjoying outdoor activities,” said Ottawa Public Health in a tweet, echoing the NCC’s directive to local residents to stay close to their homes to get exercise.

Bradshaw said that she lives nearby and that all it took was a quick walk to the canal. She said she hopes that other Ottawa residents won’t travel a lengthy distance to come and skate.

“We suggest that residents across the National Capital Region access those NCC assets closest to their home, within their province of residence,” said El-Akhrass.

A city-wide class order had come into effect in Ottawa on Jan. 8 prohibiting “sports and any activities that contravene physical distancing requirements.”

Despite the tightened skateway rules — including a strict prohibition on playing hockey on the canal — a group of young boys was spotted on the opening weekend milling around with sticks and a puck.

“If only people were following the rules,” one older skater shouted as she skated past the boys.

“I feel safe, but only because I’m with one other person and we’re wearing masks,” said Bradshaw.

However, she said she observed many skaters not wearing masks.

Meanwhile, City of Ottawa-operated outdoor rinks started imposing mandatory reservations Jan. 9. Because of the end of the provincial lockdown, public skating at select city rinks will resume on Feb. 20

Bradshaw wondered if a reservation system on the canal could help with concerns regarding overcrowding during the pandemic.