7 hours ago 0 4 min read
We use cookies to provide a personalized experience for our users. By continuing to browse this site, you give consent for cookies to be used.
Got it!
Home > News > Ottawa > Spooky attractions across Ontario haunted by pandemic rules 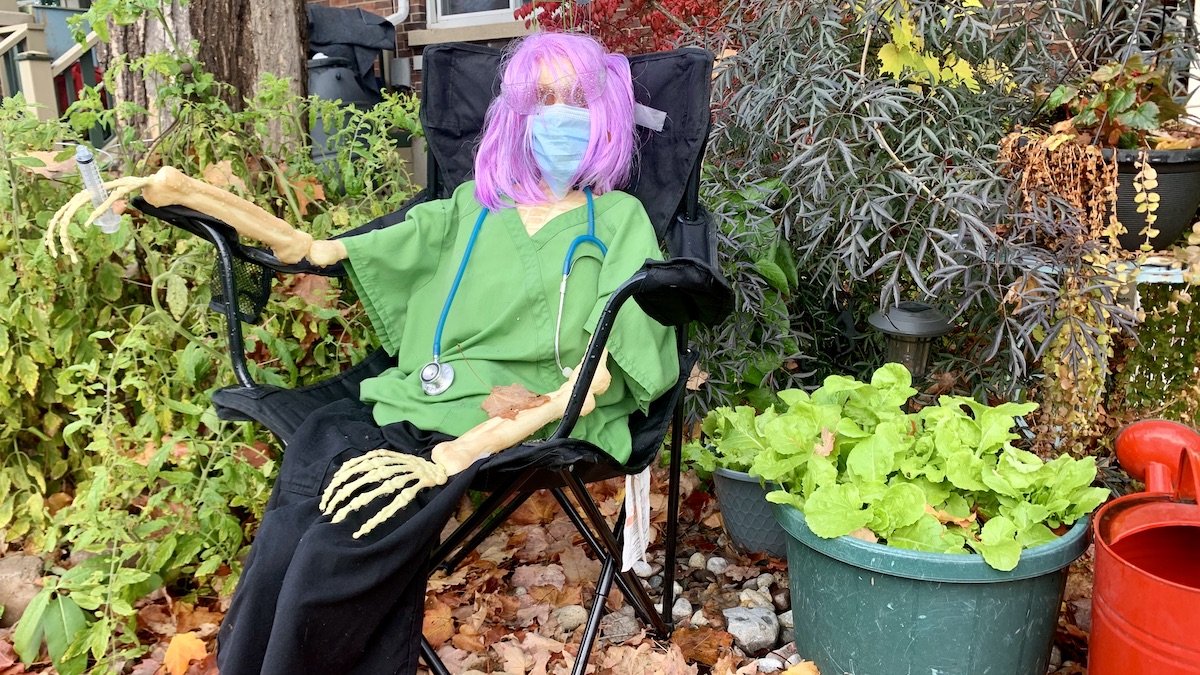 Halloween decorations placed outside a home in Ottawa's Little Italy area capture the spirt of the season. Haunted attractions across Ontario have struggled to comply with COVID-19 guidelines, and some have closed ahead of Halloween. [Photo © Paige Peacock]
Business

Haunted attractions across Ontario have taken a serious hit from the COVID-19 pandemic, with some closing their doors at the height of this year’s spooky season and others adapting to comply with public health guidelines.

Halloween will look a lot different this year in Ontario’s pandemic hotspots, including Ottawa. And that means haunted houses and escape rooms are among the many businesses dealing with restrictions because of the surging second wave of the coronavirus.

Still, some attractions are trying to provide the public with some degree of normalcy during a time of social disruption.

Some escape rooms and haunted houses have introduced truncated versions of Halloween fun, with outdoor escapes and mazes offering a different type of spooky experience.

In fact, outdoor haunts may be the new norm amid the COVID-19 pandemic. Even the great outdoors is no guarantee.

Angela Canavan, founder and chair of the Cannington Haunted Trail — northeast of Toronto — has cancelled this year’s haunted trail walk as a result of the pandemic. This year would’ve been the 12th year for the event.

Canavan said organizers made the decision in June. She believed it would have been too complicated to hold the event under strict pandemic restrictions. The haunted trail is a wooded walk and social distancing wouldn’t have been possible, according to Canavan.

“For us, it just kind of wasn’t worth all the effort and then to not be able to uphold the same experience that people are looking for from year to year,” said Canavan.

“We draw in a lot from the city, so that’s kind of another (factor) you have to look at — drawing in people who don’t naturally live here heightens the risk even more,” she added.

Fortunately, said Canavan, they didn’t lose any money. They will just postpone spending Halloween 2019’s income for a year.

The challenge of hosting Halloween events this year was made more clear when Saunders Farm — a popular haunted attraction near Munster, a rural hamlet in southwest Ottawa — was issued a series of fines totaling $3,500 for alleged municipal bylaw infractions related to social distancing and the maximum number of people permitted at the location at one time.

The farm’s owner, Mark Saunders, told Ottawa’s CFRA radio station that the fines were imposed for “for having more than 25 people on our 100-acre property,” but he added that the rules were confusing and he planned to challenge the fines.

The Stalking Dead is an outdoor maze that requires face masks and limits groups to 10 people or less, owner Jake Walling said.

Escape Maze usually organizes a haunt that’s run indoors, but Walling said they decided to replace it this year with the outdoor maze.

“We’ve noticed that when we were able to open again that people were booking the outdoor trails way more than the indoor rooms,” he said.

“The amount of customers that are actually in the room is probably a 10th of what it was normally, but our business outdoors has picked up. So we kind of balanced out with that a little bit,” Walling explained.

“We’re still considering closing,” Walling said. “We have no idea what it’s going to be like in the winter when people have to go back indoors.”

ZigZag Escape Rooms has faced its own challenges. ZigZag’s Leslie Hutcheson says the biggest issue during the pandemic has been the limiting impact of social bubbles.

“That’s really been a problem for us on the revenue side because where we could normally put 10 people in, now if a family comes and they’re only four that’s kind of what our average take is now — rather than being able to fill up a spot with 10 people,” Hutcheson explained. “So the capacity issue has been the biggest thing that has impacted us.”

According to Hutcheson, ZigZag has had to set aside a precious half hour between bookings to sanitize the room.

“It’s a necessity, but it’s not time that you can actually be generating revenue in the facility,” she said. “So that’s really hampered us.”

ZigZag has also had a more direct experience with the pandemic. They had to close shortly after reopening Aug. 1 because an outbreak at the resort. “It was a bit of a scary thing because we just opened and within two weeks we were closed again,” Hutcheson explained. “So, we deliberated at that time, as well, like — is this worth it? Every week I ask myself: is this worth it?”