3 days ago 0 1 min read
We use cookies to provide a personalized experience for our users. By continuing to browse this site, you give consent for cookies to be used.
Got it!
Home > Politics > Students in limbo after uOttawa announces plans to end student union contract 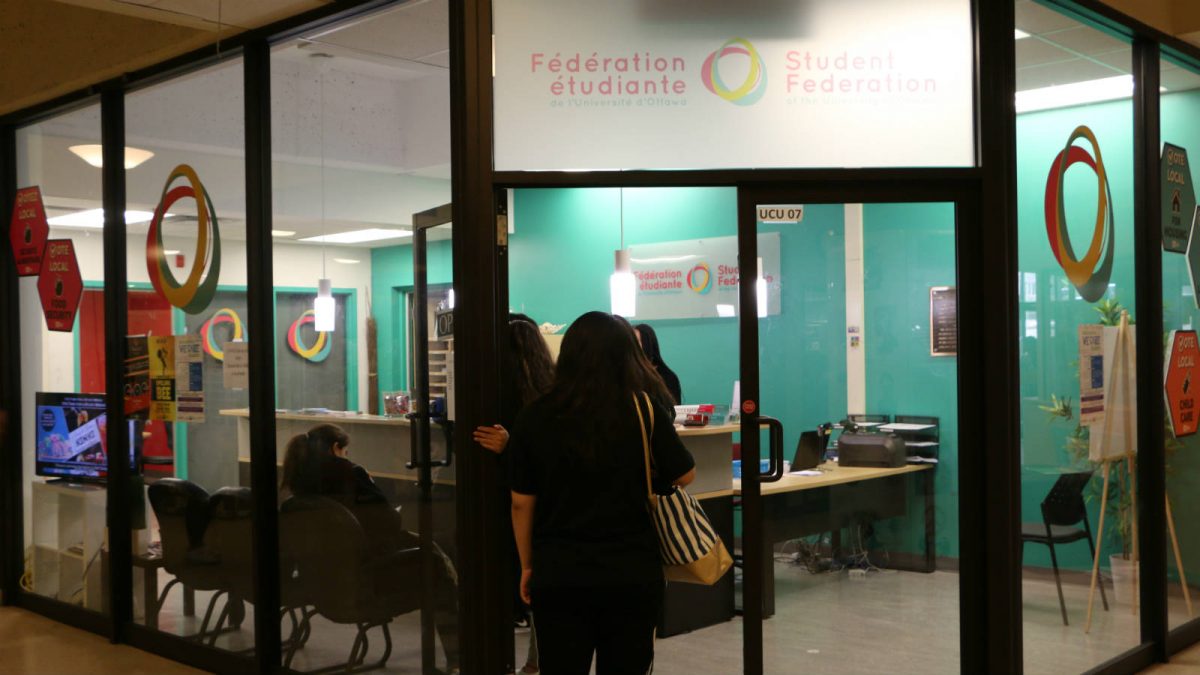 The Student Federation of the University of Ottawa (SFUO) plans to continue providing its services despite University plans to terminate the union. [Photo © Jenna Cocullo]
Politics

A month after the University of Ottawa said it would stop bankrolling its student federation, 36,000 undergraduates are uncertain how key services and activities will be funded, but there are early signs a new student organization may step in.

In September, the university administration told the The Student Federation of the University of Ottawa (SFUO), which represents undergraduate students, runs 12 service centres, four businesses and co-ordinates more than 250 clubs and about 20 federated bodies, that it will no longer collect student fees on the federation’s behalf.

“If it disappears it’s going to be really unfortunate, it’s helpful for a ton of people,” said second-year psychology student Mckenzie St. Louis of the SFUO’s peer support centre, which she uses for help writing essays.

The school’s contract with the SFUO is officially ending Dec. 24, according to a statement from the university.

“The University has lost confidence in the SFUO’s ability to represent our students and to supply the services that students pay for,” wrote David Graham, the vice-president academic and provost, in the statement.

The SFUO is not allowing employees to speak to the media. In a statement signed by SFUO executives, the federation accused the university officials of taking an “anti-union” stance and vowed to continue providing services, though it’s not clear how it could.

“They should have consulted (the student body) first,” said Neermala Napoleon, a third-year social sciences student.

The fate of service centres, many student groups and four campus businesses remains unclear. Some Clubs rely on the SFUO for booking rooms and tables, storage, insurance and obtaining official status, which earns them a spot in the directory students use to join clubs.

Kyla Ruch, an executive with the University of Ottawa Outdoors Club,
said much more clarification needs to be done by both the SFUO and the university administration.

Ruch said the Outdoors Club relies on SFUO funding for its insurance policy, which is essential to protecting students engaging in high-risk activities. However, she also noted that  have seen less funding year to year from their federation.

“Clubs are falling through the cracks … it’s a sad reflection of our school,” said Singshan Bruleigh, a member of the U of O’s Delta Delta Delta sorority who was unable to set up tables for recruitment since the termination of the SFUO was announced.

The future of the four SFUO-run businesses on campus, including the convenience store Pivik, Café Alt, bar 1848 and Agora Bookstore is also up in the air.

The university is encouraging students to create a new student government to fill the void. Recently, a new groups known as the University of Ottawa Student’s Union (UOSU) emerged.

The group, which has already written a draft constitution, is lead by Moe Abou Rouss, a fourth-year commerce and marketing student and Tiyana Maharaj, a third-year women’s studies student

“It’s a strange time on campus and … getting closer to December, the sense of uneasiness will only grow,” Maharaj said, explaining why they started the new union.

They said they hope to prevent mistakes made by the SFUO by boosting accountability: giving more power to a new general assembly, building a new executive structure and adding an outside professional accountant.

“We’re a movement for all,” Abou Rouss said. “We want to make sure students have the voice and representation, that they’re the ones who make decisions.”

“Going forward, I hope the university places stricter rules and frequently stays up-to-date on how the student union is actually serving … students,” said Sarah Tumbas, a member of the University of Ottawa Ski and Snowboard Club and a third-year business student, in an email.

Meanwhile, Transit passes will not be affected by the university’s action. These are governed by a separate agreement with the City of Ottawa. The SFUO also provides undergraduate students a health care plan, but the university said it will work to provide full coverage for students until the end of August, 2019.

The university’s statement did not specify whether it will ensure that widely used services like a student-run food bank or the foot patrol will stay open, but said it “will take steps to ensure that the health and wellness of our students is not compromised.”

The SFUO’s conflict with the U of O, explained

Tension between the SFUO and the U of O administration and students has been growing for months.

As first reported by the Fulcrum and La Rotonde, the university’s English and French student newspapers respectively, the trouble dates back to early August.

Fraud allegations mentioning three SFUO executives by name were made by the outgoing president of the SFUO in a report filed to the Ottawa Police Service (OPS).

Student media said the report alleges that the SFUO president received upwards of $20,000 from a faulty club.

After the news broke, the university administration released a statement announcing it would freeze all payment transfers to the SFUO until a forensic audit was completed.

On Sept. 22 the Fulcrum published details of a document it obtained wherein the university requested the resignation of executives, also hinting at the possibility of terminating its agreement with the student union. Two days later, the university announced the termination.