1 week ago 0 1 min read
We use cookies to provide a personalized experience for our users. By continuing to browse this site, you give consent for cookies to be used.
Got it!
Home > Profile > Faces of change: Kai Dean brings LGBTQ-friendly auto services to Ottawa 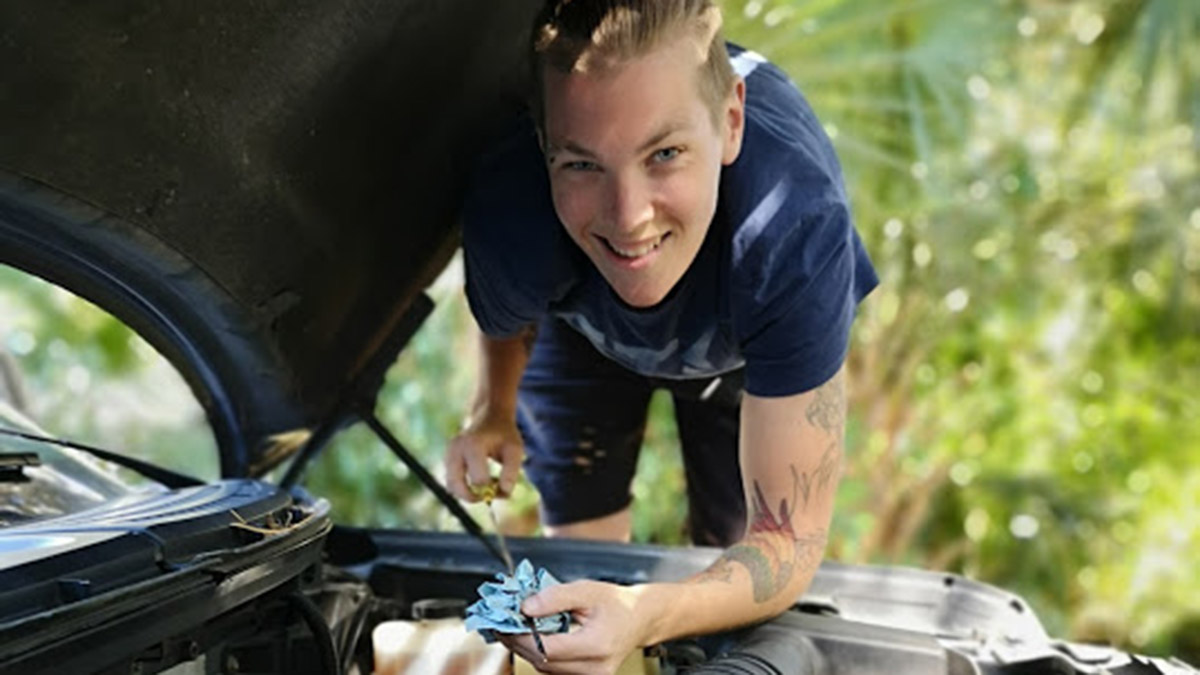 Kai Dean is a roaming mechanic bringing a much needed service to LGBTQ people and others concerned about the stress of potential discrimination at a typical garage. [Photo courtesy Liza Ricetti]
Community

For LGBTQ people, getting a tire rotation or an oil change on a vehicle can be more difficult than simply running an errand. Being harassed or referred to with the wrong pronoun can make a trip to the mechanic distressing.

That’s where Kai Dean comes in. The owner of the automotive repair business, The Roaming Ratchet, is bringing LGBTQ-friendly auto services to Ottawa.

The Merrickville mechanic offers mobile services through which LGBTQ customers can trust their pronouns will be respected and they won’t face discrimination.

“There is a serious lack of safe spaces for the queer community — places where we are treated with respect and accepted as who we are,” Dean said.

Dean uses they/them and identifies as non-binary, meaning their gender doesn’t specifically fall into the idea of male or female.

“After years of hearing from friends in the queer community about their difficulties when going to garages, I hatched the idea of The Roaming Ratchet over the summer and asked several friends if it was a service they’d benefit from,” they said.

Dean said after a “resounding yes” from friends, they began to build their business.

But The Roaming Ratchet isn’t just for people who don’t identify with the gender assigned to them at birth. Dean says the business about providing a safe service to anyone who feels stressed about potential discrimination at a traditional garage.

“I’ve also had many women reach out to me as well because, while they may not be queer, they have a difficult time with garages as well — where, unfortunately, the industry has been mostly dominated by toxic masculinity,” Dean said. “Having someone take the time to learn your name, your pronouns, speak with you with respect, and explain about the work is something I provide for all my clients, whether queer or allies.”

‘”Having someone take the time to learn your name, your pronouns, speak with you with respect, and explain about the work is something I provide for all my clients, whether queer or allies.”

The Roaming Ratchet began when Dean opened a Facebook page in September so users could book mobile services.

After a slew of online support, it now boasts more than 2,000 likes and has even seen media attention. Dean was featured in a CBC article in early October.

Dean says they’re humbled by the support. What’s important to Dean, though, is the discussions their business opens up.

“The absolute best feeling personally was after my CBC interview, hearing from young Non-Binary kids and their parents thanking me for being visible and for showing them that there is a place for all of us in society,” they said.

“[LGBTQ people] live in a society where we also want to be acknowledged—and be acknowledged because we are here, you know—we are normal folks living in a community.”

A future full of respect

Maynes says he pictures a future where members of the community won’t have to worry they won’t be respected.

To support more LGBTQ-friendly businesses such as The Roaming Ratchet, Maynes suggests visiting Capital Pride’s The Rainbow Pages Business Directory, which so far lists 17 businesses that are LGBTQ-supporting, ranging from suppliers of French decor to law firms.