4 days ago 0 6 min read
We use cookies to provide a personalized experience for our users. By continuing to browse this site, you give consent for cookies to be used.
Got it!
Home > News > Ottawa > Rolling up the rim cups poses dilemma for popular Tim Hortons contest in a time of COVID-19 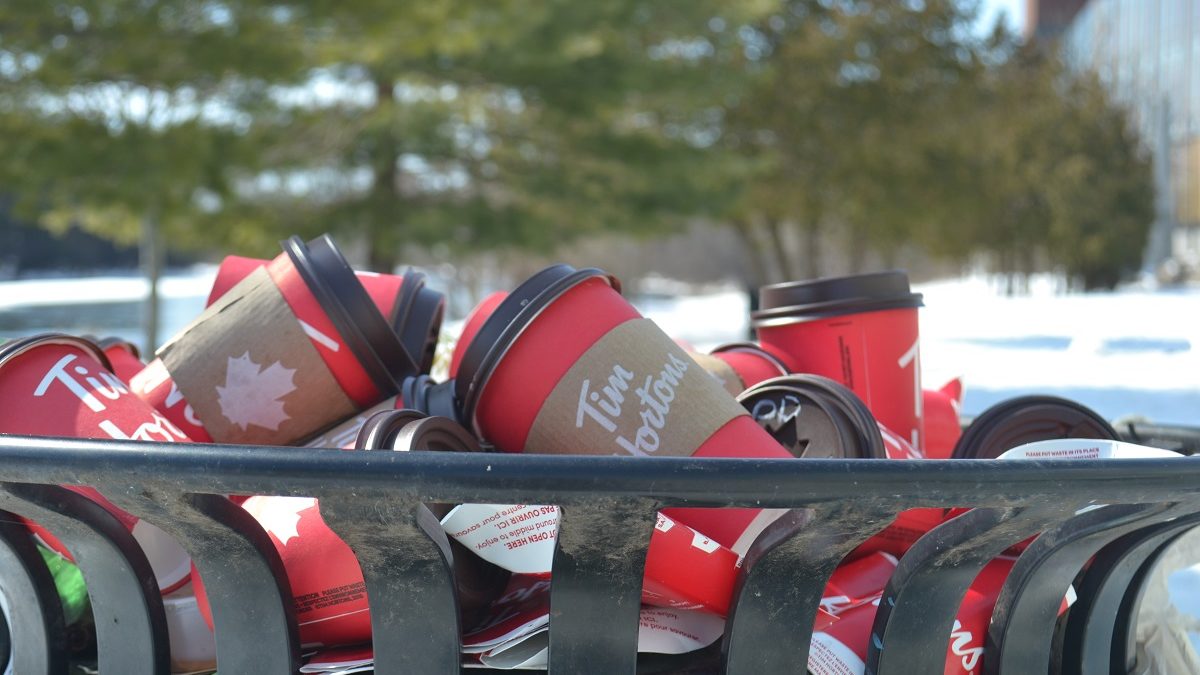 A slew of cups and lids fill a trash can on Carleton campus. [Photo @ Olivia Kabelin]
Canada

By Olivia Kabelin and Isabelle Lam, 2 years ago 0 4 min read

Tim Hortons rolled out a digital model for this year’s Roll Up the Rim to Win contest in what the company says is an attempt to be more green and as a last-minute response to the COVID-19 pandemic. Before Carleton University campus closed, Capital Current asked some thirsty students — home to four Tim Hortons locations — what they thought of the changes.

“When you buy a coffee, you want to roll up the rim as soon as you finish it and see if you won. Waiting for the moment, that anticipation of physically rolling up the rim, I don’t think it’ll be as engaging through the app and I won’t be as motivated to participate,” said Mariam Dhaif, a fourth-year psychology student at Carleton University.

Tim Hortons had planned a giveaway of 1.8 million reusable coffee cups on March 10, incentivizing customers to bring in their reusable mugs to receive three digital rolls per hot beverage purchase.

These changes were initially an effort to to be greener by decreasing the number of disposable coffee cups sold. The switch to digital rolls was intended to coincide with an increase in the use of the reusable cups. Customers purchasing a hot beverage will have the opportunity to digitally roll to win via the Tim Hortons app until April 7.

However, in the light of COVID-19 pandemic, Tims cancelled the giveaway and is now declining to fill reusable mugs, following Starbucks and Second Cup.

Concerns regarding spread of the virus also prompted the chain to scrap their Roll Up the Rim cups that were to be ready for the first two weeks of the contest.

In a March 7 press release, the company “does not believe it’s the right time for team members in our restaurants to collect rolled-up tabs that have been in people’s mouths during this current public health environment.”

Dr. Bonnie Henry, British Columbia’s provincial health officer, says she’s not sure if the move to decline reusable cups will make a difference in the virus’ spread. People contract COVID-19 wh by touching their eyes after coming into contact with the virus, she said.

“I think the reusable cup promotion is a great idea and maybe that’ll work for next year,” said Dhaif. “I think it’ll help a lot of people understand that there’s something called climate change going on and maybe it’ll make them more aware of how their consumer habits contribute to the issue.”

The issue of sustainability was on the minds of other students as well. With the decision by main coffee chains to turn away reusable cups, the number of single-use cups being handed out is likely to rise. And even while accepting reusable cups, Roll Up the Rim 2019 produced 260 million single-use coffee cups, according to Greenpeace.

“It’s such a crazy number, you don’t really think about how much waste can be created just from this contest alone,” said Zoe Stockford, a first-year Sprott School of Business student at Carleton University.

The approximate 81 million Roll Up the Rim cups that have already been produced will now be recycled, according to a Tim Hortons media release on March 7.

However, for consumers, recycling Tims cups is not necessarily readily accessible. In a review of major Canadian municipalities, cups and lids weren’t accepted for recycling in 15 of 20 cities, according to Greenpeace.

Recycling Advocates, a non-profit organization promoting sustainability, estimates that if an individual purchases a disposable coffee cup every day, it will generate about 23 pounds of waste per person, every year.

Depending on the municipality, cups and/or lids have an impact on local landfill capacity. In Ontario, existing landfills are expected to run out of space by 2032, according to the Ontario Waste Management Association’s 2018 report.

Environmental Defence — a Canadian organization advocating for clean water, a safe climate and healthy communities — says the new Tim Hortons lids introduced in July 2019 are made of 59 per cent more plastic than the old lids.

“I think they should be changing their cups to make them more widely accepted by different municipalities, not creating products that generate more waste,” said Stockford.

Environmental Defence recommends that Tim Hortons invest in creating sustainable solutions, charge customers for single-use items, and develop a deposit return program where customers can pay for a reusable cup and get their money back when they return it.

“We’re wasting so much and it’s not hurting us right now, but it’s going to harm us in the future,” said Dhaif.

IN THE NEWS: Tuesday, March 24

The time I got a private jet for $300: Fleeing COVID-19 on one of Canada's last international flights