6 days ago 0 6 min read
We use cookies to provide a personalized experience for our users. By continuing to browse this site, you give consent for cookies to be used.
Got it!
Home > Transportation > Transformation of Prince of Wales Bridge into cycling, pedestrian crossing proving popular 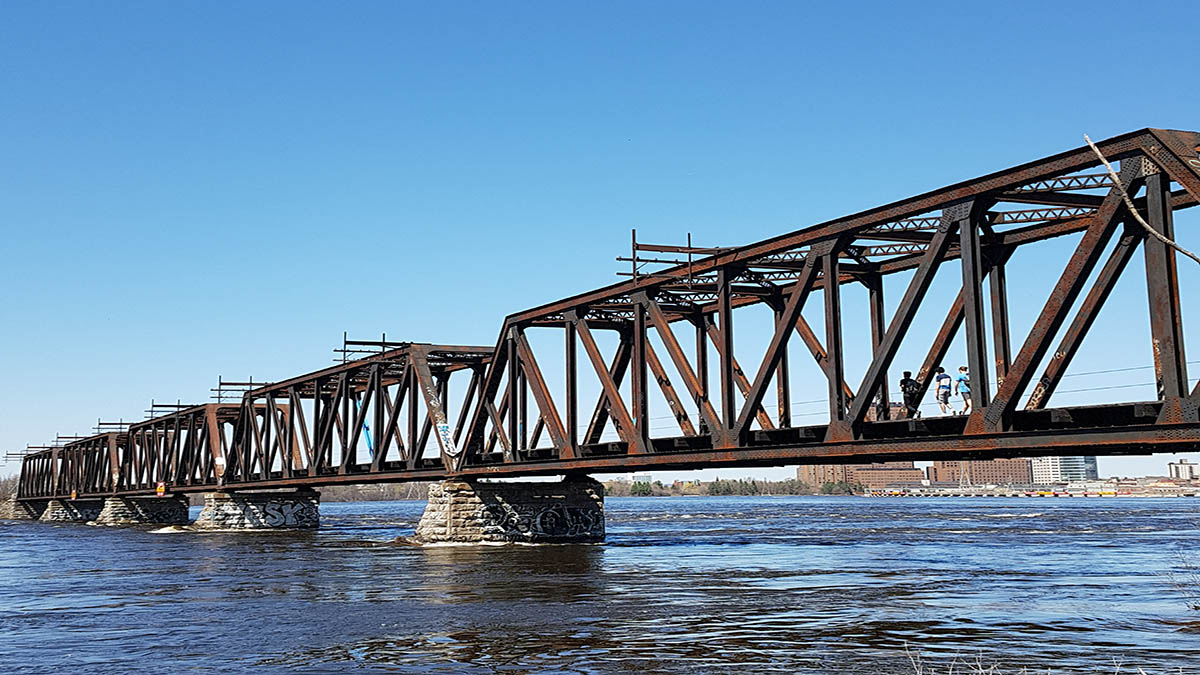 The Prince of Wales Bridge spanning the Ottawa River was purchased by the City of Ottawa in 2005 from the Canadian Pacific Railway. In late 2020, the city announced plans to turn the old rail link into an active transportation corridor for cycling and walking, and weeks of public consultations wound up March 8. [Photo © Brian Dawson]
Architecture

The public has been getting its chance to shape the City of Ottawa’s planned transformation of the Prince of Wales Bridge into a pedestrian and cycling route.

Along with public consultations held from Feb. 22 to March 8, a study will identify potential environmental impacts of the project.

Kitchissippi Coun. Jeff Leiper said the rehabilitation of the 19th-century railway bridge has been urged by local residents for at least a decade.

“The time has finally come,” said Leiper. “The federal commitment is now there to accomplish this rehabilitation and everyone is very excited.”

The bridge had been previously identified as a future “Major Pathway” in the city’s 2013 transportation master plan. It’s also a key part of the Ottawa Cycling Plan aimed at improving cycling infrastructure in the capital.

The bridge’s transformation will mean an easier path directly north of the Bayview LRT station for many cyclists in Ottawa and Gatineau who are looking to cross the Ottawa River.

“There are also a lot of people who have been seeking a safer way to get across to the Gatineau side in order to work,” said Leiper. “There are several very large federal employment nodes in Gatineau that are difficult to reach by biking. This will now create a safe alternative to crossing the river.”

Best use for the crossing

The Prince of Wales Bridge opened for train traffic 140 years ago in January 1881. It has not been used for rail traffic since July 2001.

Toon Dreessen, the president of Architects DCA, said converting the old rail bridge for cycling and walking is the best use for the crossing.

“It’s a piece of our industrial and architectural history and it’s sitting there being allowed to decay through inaction,” said Dreessen. “Converting it to an active transportation link is an excellent use of the infrastructure.”

Leiper says that, so far, residents in the area have responded very favorably. And there has been excitement about the possibility of cross-country skiing across the bridge in winter, as well.

The possibility arises from a promise made by Dave Adams, the head groomer and project manager of the Sir John A. Macdonald Winter Trail, which runs along the south shore of the river past the Ottawa-side approach to the Prince of Wales Bridge.

Adams has told the public that if the conversion of the bridge is completed, he will groom the bridge for cross-country skiing.

“I pass by that bridge everyday as I groom the snow. It just makes sense that I can just carry on and do the same thing on the Quebec side,” said Adams.

When asked about possible hurdles to this idea, Adams said he believes any challenges can be overcome.

“It could be a bit of struggle for the bridge to retain snow, but there are some technical ways we can get around that so it can be passed over by skis.”

“It’s a question of how we choose to use and maintain the space,” Dreessen said. “If the bridge pass is a cycling path on one side and a pedestrian space on the other, there is no reason that one of the two can’t become a cross-country ski path in the winter.”

Dreessen says he would like to see other uses of the bridge in the future as well, like a café or refreshment option half-way across.

tuvanasahinturk · The Prince of Wales Bridge

Along with the repurposed use of the bridge, it’s also getting a new name.

In January, Ottawa Mayor Jim Watson said it was time to rename the bridge to honour the respected Algonquin leader William Commanda, a human rights and environmental advocate who died in 2011.

Leiper and Adams say they support the proposed name change.

“I’d like to commend Mayor Watson for making a name change suggestion,” said Adams. “I think that is fantastic and it goes a long way for reconciliation. I support that 100 per cent.”

While the start date for rehabilitating the bridge is still to be determined, the final design for the repurposed link is expected to be completed this spring.

“As long as the financing that is expected flows, and as long as construction is smooth, I think this can only be a good news story,” Leiper said.

In The News: Thursday, March 11