2 weeks ago 0 9 min read
We use cookies to provide a personalized experience for our users. By continuing to browse this site, you give consent for cookies to be used.
Got it!
Home > Social Justice > Student representatives ‘disappointed’ by committee report sparked by professor’s use of N-word 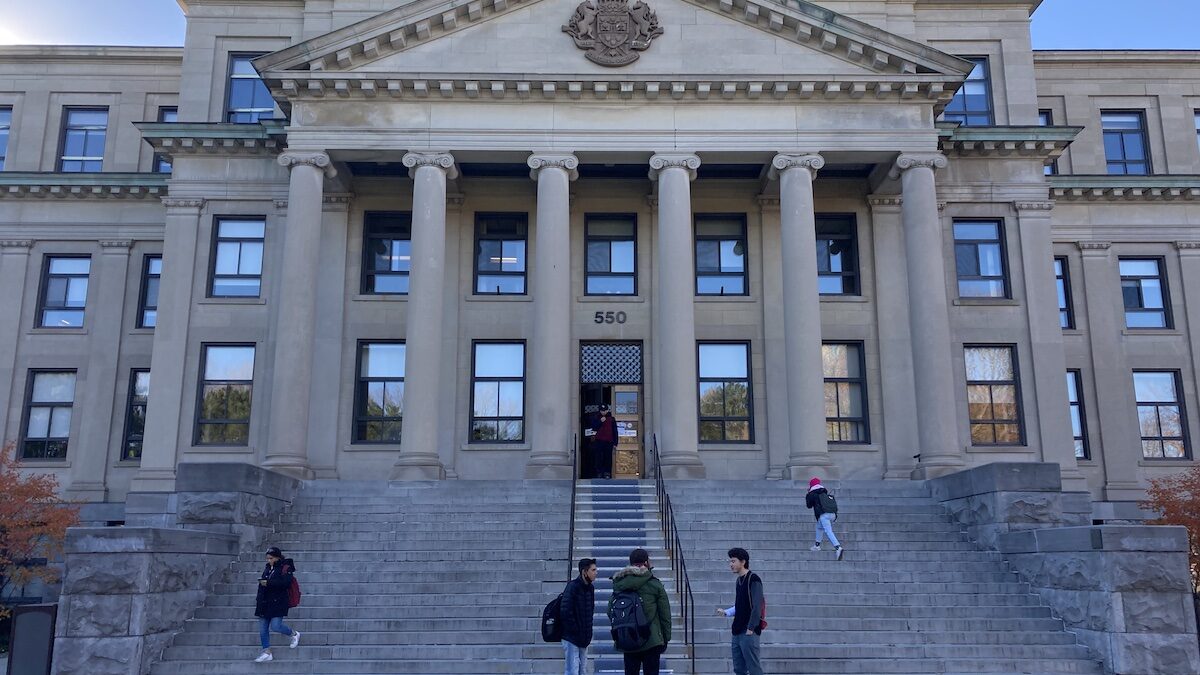 A University of Ottawa professor's use of the N-word in September 2020 in a class about art and gender sparked a high-profile controversy on campus, including protests outside Tabaret Hall (above), which houses the office of the university president. A Nov. 4 report on the issues arising from the incident was delivered by a committee on academic freedom. The uOttawa's student union has slammed the report as a disappointment for failing to recommend banning the use of the N-word in classes. The union is calling for structural changes on campus to better combat racism. [Photo © Noor Azrieh]
Education

A battle over the use of the N-word in class by a University of Ottawa professor last year has led to a new report from a campus committee defending academic freedom and a swift rebuke of the committee’s findings by the group representing uOttawa students.

The University of Ottawa Students’ Union representatives said they were disappointed by the report from the Committee on Academic Freedom.

“Today, student representatives are expressing their disappointment in the report on several levels,” UOSU stated in a media release Friday.

The controversy was sparked in September 2020 after Verushka Lieutenant-Duvala, a part-time professor teaching a course on art and gender, used the N-word in class as part of a discussion about certain derogatory words being reappropriated by groups fighting to overcome oppression.

She later apologized for using the word. “During a university course, I don’t want to hurt anyone. I agree with everyone, there’s no place for that,” she told CBC in October 2020. “If I knew that that word should not be spoken in the context of an academic course, I would have tried to find another way, that’s clear.”

Lieutenant-Duval was suspended on Sept. 23, 2020, after students complained she had used derogatory language in class. She taught again during the spring 2021 term but did not return this fall.

“I remember all the Twitter posts, Instagram posts and protests that followed (the incident),” said uOttawa student Celeste Wong, recalling the impact of the incident. “I was shocked — actually more appalled than shocked. We all know uOttawa has a bad past with incidents like this.”

In April, the Committee on Academic Freedom at uOttawa led by former Supreme Court justice Michel Bastarache began examining the case in the context of academic freedom and its challenges.

The university published their report on Thursday.

“The committee feels that a diversity and inclusion training program should be established, along with a personal consultation service for faculty members,” the report stated in one key recommendation. “The consultations clearly showed that faculty members often feel ill-equipped to address the issue and that they urgently need information and resources to do so.”

But the report also drew this conclusion: “The committee recommends that the University affirm the need to protect academic freedom and freedom of expression in fulfillment of its teaching and research mission. The committee is therefore against the exclusion of words, works, or ideas in the context of respectful academic presentations and discussions whose educational goal is to promote the dissemination of knowledge.”

The review committee said its report was designed to set out practical solutions and describe a constructive path forward, but failed to specify the events that led to its solutions and that drew fire from the student union.

“After the professor used the N-word in class last year, all the students decided to leave the class section, resulting in a disruption to the learning environment that could have been avoided if mutual respect between students and professors were upheld,” said the students’ response to the report.

The incident divided many on campus. Thirty-four professors across various university departments signed a letter of support for their colleague, while many students called for action in developing a zero-tolerance policy on the use of the N-word.

As a part of its review, the committee consulted with the university community, including professors, students, and support staff. They asked: How do you define academic freedom? What are the limits of academic freedom and freedom of speech?

The committee received 102 briefs and comments during the first phase of its consultation. Sixty were submitted by members of the teaching staff, while students submitted 40 briefs. Support staff also prepared one brief, and campus unions submitted two.

Although many were consulted, the student union’s press release stated: “The report’s recommendations also fail to reflect the consultations the committee had with students and other stakeholders.”

While a majority of the report’s pages summarize consultations, they fail to reflect the perspective of BIPOC students and faculty members, the UOSU argued.

The university’s caucus of the Black, Indigenous, and People of Colour Professors and Librarians started a petition over the controversy last year. The petition has now accumulated more than 4,100 signatures.

“The Black, Indigenous, and People of Color Professors and Librarians caucus at the University of Ottawa,” the petition states, “unequivocally condemns the use of the N-word and the conversation on academic freedom that is being used to justify the use of this racist slur.”

Although the University of Ottawa’s collective agreements provide a definition of academic freedom, there is no universally accepted definition.

The Canadian Association of University Teachers describes academic freedom as “the freedom of teachers, without restriction by prescribed doctrine and freedom from institutional censorship, to carry out research and public the results thereof, to teach and discuss, and to criticize the university.”

The UOSU said it believes strongly in the importance of academic freedom, but argues the report “seems to sanction the use of virulent language without weighing the responsibilities of professors to maintain a respectful learning environment.”

“How is the university so comfortable glossing over extreme issues of anti-Black racism?” said Wong.

Hannah Mohamud and Saada Hussen, student representatives on the university’s board of governors, said they believe the committee report is not a sufficient response to the real issue at hand.

Although there are six recommendations in the report, the UOSU said the university needs to use its resources to take meaningful and decisive action against systemic racism, instead of dedicating resources to creating a committee that would drown out student perspectives.

“The fact that the report did not focus on the harm done by the use of the N-word misses an opportunity to challenge anti-Black racism, an issue brought to the fore by student activism,” said Mohamud.