3 days ago 0 4 min read
We use cookies to provide a personalized experience for our users. By continuing to browse this site, you give consent for cookies to be used.
Got it!
Home > News > Ottawa > Van Gogh 360 immerses you in the art of a great painter 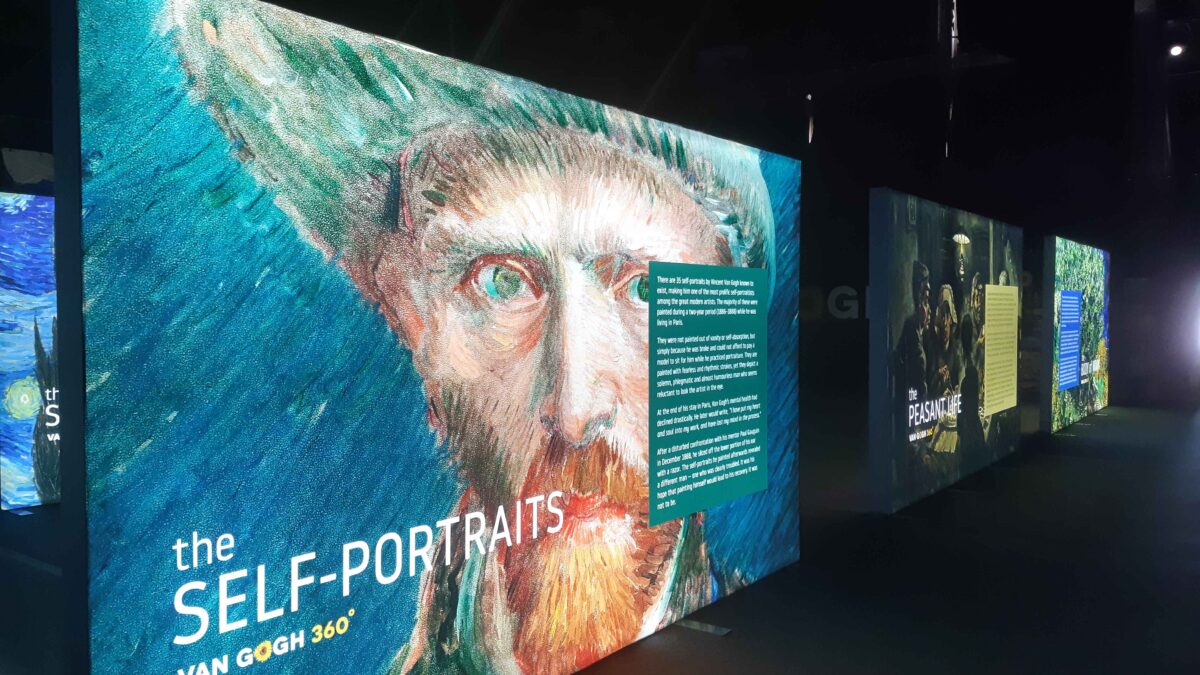 There is a small door at the Aberdeen Pavilion that opens to another dimension.

Once you present your ticket, you are immersed in the art of Vincent Van Gogh.

Music surrounds visitors as they move from one screen to another, learning more about the famous and tragic artist and some of his paintings that are featured.

After learning a bit more, you walk down a small hall leads to the main exhibit. Once there you are surround with the artist’s work. The four walls and the ground are large screens presenting the 30 minute show. Don’t forget to look at your feet every once in a while, if you can tear your eyes away from the rest of the show that is.

The Van Gogh 360 opens the show and soon lines appear forming waves, ears and outlining one of Van Gogh’s famous self portraits.

“When I have a terrible need for — shall I say the word — religion, then I go out and paint the stars”

The music changes and with it, green paint strokes appear eventually covering the screen. This transition happens more than once, where the paint strokes seem like they are being painted by Van Gogh himself.

The exhibition is truly one of a kind. Everything in the room is designed to fully immerse the viewer. The background music is something you might hear in an epic fantasy movie, with a sadness to it. The music changes tone when a transition is about to happen and that is where the magic truly lies.

Furniture dropping from the sky to land on a field that birds fly across. The music changes, and the furniture starts flying up and trees start growing from the ground, swaying with a wind, a building fades into existence in the middle of the screens.

After a minute, an industrial town emerges with smoke rising. All the screens slowly turn black, as if the smoke was filling the room. Lanterns appear, lighting some areas, and the people in his Potato Eaters painting appear in multiple parts on the screens.

This is just an example of the transitions in the exhibit. The animators worked really hard to use lighting and music to fully immerse viewers. And they succeeded. There is always something happening, something moving.

The colours of Van Gogh’s palette fill the room’s five screens, making you feel as if you are a part of the painting.

The Starry Night animation was particularly mesmerizing. Arguably the most famous painting by Van Gogh, the painting captures the beauty of the night beautifully. In the exhibit, the stars slowly rotate, with the trees swaying and the night sky slowly moving with the strokes of paint.

The transition from one painting to the next, and the animation in each painting really brings them to live. The music adds another dimension, making this experience as immersive as possible. It is truly a sight to see.

“How did a man who loved flowers and light to such an extent, and who rendered them so well, how, then did he still manage to be so unhappy?”

Claude Monet, owner of The Irises

Van Gogh was born in 1853. His paintings captured the people he encountered in his daily life, landscapes, flowers and more than 30 self-portraits.

The self-portraits often depicted a “solemn, phlegmatic and almost humourless man, who seems reluctant to look the artist in the eye,” according to the exhibit notes.

During his final months, he painted nearly one canvas a day.

As the exhibit says “his painting has become a boundless, energetic frenzy of absolute creativity […]. On the other hand, his mental state was on a knife’s edge, caught between the visceral thrill of his creative expression and the darkness that crowded in on all sides.”

“I have put my heart and soul into my work, and have lost my mind in the process”

Both the artist and the exhibit itself are extremely relevant right now. His struggle with mental illness is well-known. Most of his paintings were painted over a 10 year period, with a majority painted a few months before his death.

He died in 1890 of a gunshot wound to the stomach. Most believe he tragically took his own life. A new theory suggests that he was killed by a young boy who was playing with his father’s gun and accidentally shot the artist.

With increased awareness of the prevalence of mental illness that has emerged during the pandemic and with rising suicide rates, discussing these topics in public is more important now then ever.

The technology used in this exhibit is one of a kind. Mixing and matching different paintings, animating them and providing a fully immersive experience can revolutionize how exhibits are presented.

Such exhibits can bring the art of artists from around the world, works that most people don’t get the chance to see. The exhibit also provides a different way of interacting with visual art, immersing viewers into a painting; making them feel like they are a part of it.

This is a must-see exhibit, and will make you appreciate Van Gogh’s works even more.
The exhibit runs Thursdays and Saturdays from 10 a.m. to 8 p.m.