1 week ago 0 1 min read
We use cookies to provide a personalized experience for our users. By continuing to browse this site, you give consent for cookies to be used.
Got it!
Home > Business > Small Business > Witches, lovers of occult set to gather on Halloween for Ottawa’s first Mystic Market 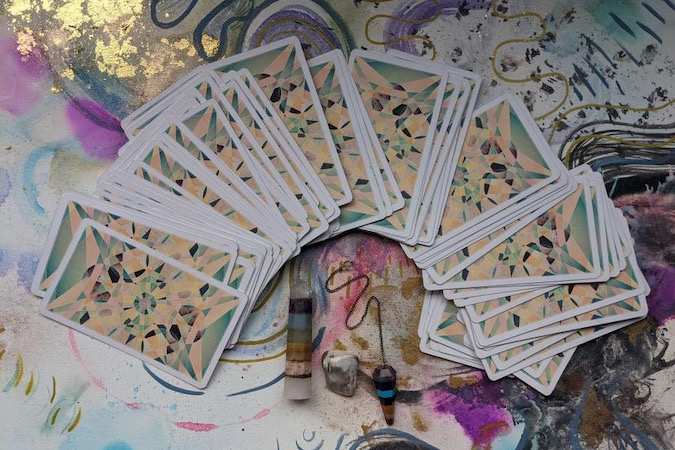 Aida Hodkinson has been organizing vintage pop-up markets in Ottawa since 2016. This year, she put her skills and witchy background together to organize Ottawa’s first ever Mystic Market, to be held on Halloween in Westboro.

“We have people who sell oddities, who sell crystals,” said Hodkinson. “We’ve got mystics and spiritualists who read tarot. Everyone is bringing all their crystals, all their oddities. We have craftspeople and makers who make cool, spooky things.”

She added: “It’s just an experience that I would like to have, as a shopper, as someone who’s into fun, odd things.”

The Mystic Market will feature items that witches, mystics or anyone who has an interest in the magical would love. The event runs from 10 a.m. to 4 p.m. on Sunday at 274 Richmond Rd.

COVID-19 protocols will be in place, including mandatory masking.

Monica Pereira, a witch who sells “handmade items for the weird ones”, said she’s bringing her products to the market.

Pereira said she is most excited about the chance to meet and connect with new people and, as she put it, to give the universe a chance to challenge her.

“There’s always the funniest things that happen when you just trust the universe to bring you places,” she said. “It makes for an interesting life, and I get excited for it.”

The power of the universe is a common belief amongst witches. Josée Laberge, a tarot queen, explained that, to her, the mystical is about “being in tune with yourself, and with the universe and everything that comes with it.”

Laberge will also be at the Mystic Market, dressed as a fortune-telling witch, offering tarot readings, oracle readings, aura readings and reiki-chakra alignments — a form of meditation and hands-on healing based on the body’s invisible energy centres.

“It’s just a very good idea,” Laberge said about the upcoming market. “I don’t think we’ve had a lot of that in Ottawa. We’ve had some psychic fairs and things (but) nothing of this variety … I think it’s going to be a lot of fun.”

Hodkinson got the idea after she started selling witchy items during the pandemic through her own vintage shop, Lady Arkenstone Vintage. She said she got such great feedback from customers that, on a whim, she decided to organize something for Ottawa mystics and those interested in the magical.

“We want everyone to get festive,” she said, adding that “for somebody who wants to celebrate Samhain and Halloween and Allhallowtide, or whatever you want to call it, this is a good opportunity to do it in a safe way, outdoors, socially distanced, wearing a mask, but still celebrating and being festive and experiencing the joy of the season.”

Pereira explained that practitioners of witchcraft observe certain holidays throughout the year that focus on specific rituals. These holidays are often based on the natural shifts of nature. Halloween, or Samhain as witches call it, is one of these days. It marks the second harvest season, Pereira explained, and is a time to honour those who have died and to reflect on your own life.

All three women talk about the importance of intuition and intention in witchcraft.

Laberge explained that, on one level, a tarot deck is nothing but “a bunch of cards… There’s about 22 major arcana cards … there’s also four suits that have 14 cards each. So, they have a king, a queen, a page and a knight, as well as the one through ten numbers.”

Carleton Journalism · What is tarot?

But the magic of tarot comes from the reader’s intuition and ability to interpret the cards and all their potential meanings. Laberge said that, to her, tarot is about “looking within you for the answers and having those answers that you knew all along.”

To these witches, magic is found in the little things. It is the power of intention, as Laberge explained; it is understanding that what you put out into the universe, the universe will give it back.

“The little things, when you put them all together, all adds up to big stuff,” saidPereira. “(They) bring you back into a centre of mindfulness — that’s where magic really helped me. Grounding me back and giving me the space to process things and think things through and giving me a safe space.”

She advised paying attention to little things, like keeping a manifestation token in your bra, or stirring your coffee clockwise to attract positive energy and counterclockwise to get rid of negative energy.

Hodkinson invites everyone — witches and non-witches alike — to attend the market and explore the magic in the world.

“I want you to follow that, follow that stream of your intuition telling you ‘explore this, explore this.’ Don’t suppress it, follow it,” she said. “Explore, research, read. It’s really great, it’s fun, and if it’s not your belief, at least it’ll be entertaining.”

Editor’s Note: The location of the Mystic Market was updated on Oct. 30.