1 week ago 0 9 min read
We use cookies to provide a personalized experience for our users. By continuing to browse this site, you give consent for cookies to be used.
Got it!
Home > News > Ottawa > Critics urge city to speed up plan to eliminate road fatalities 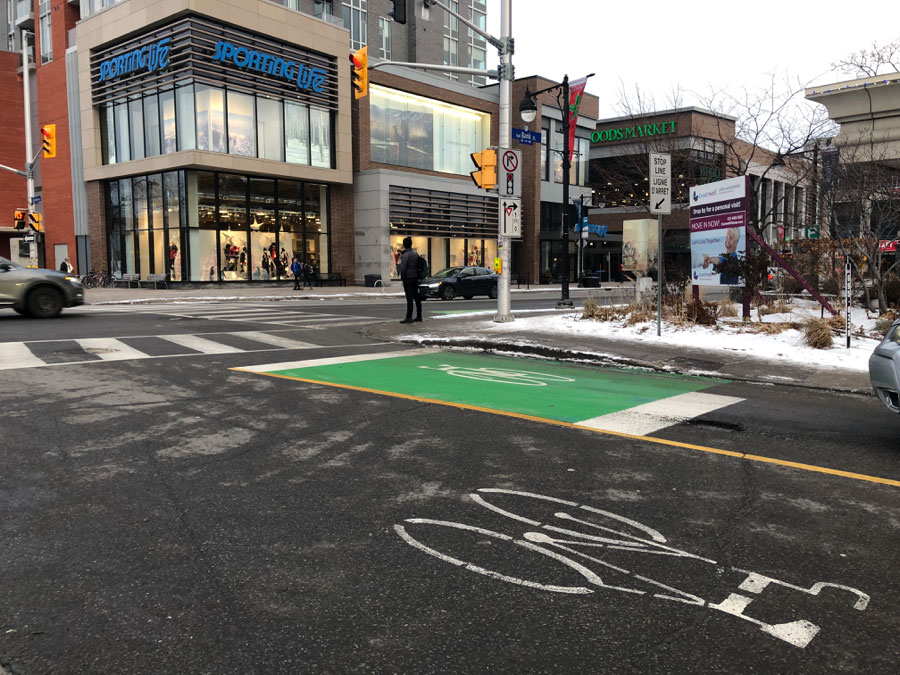 The busy intersection of Bank Street and Holmwood Avenue near Lansdowne Park in the Glebe has special features to promote the safety of cyclists. [Photo © Emily Wilson]
Community

As the City of Ottawa approaches the final stage of its three-part Road Safety Action Plan, councillors are pushing for transportation fatalities to disappear by 2035 under the campaign #VisionZero.

That’s not soon enough for some critics.

Some observers want the city to aim for a zero fatality rate by 2024 instead of by 2035.

Ecology Ottawa responded to the release of the action plan by noting that it “essentially establishes an ‘acceptable’ level of severe injury and death in Ottawa. That is, a 20 per cent reduction from today’s levels by 2024.”

In a statement on its website, Ecology Ottawa said: “If the new Road Safety Action Plan was designed to signal that the city was finally prioritizing the safety of vulnerable road users, it has badly missed its mark. While we commend the staff that worked diligently and consulted widely, the document lacks ambition at a time when cities around the world are re-thinking their transportation networks to prioritize pedestrians and cyclists.”

Though the zero-fatalities goal is ultimately aspirational in either the 2024 or 2035 scenario, a faster push towards it would mean bigger, earlier investments in infrastructure to improve the safety of motorists, cyclists and pedestrians alike.

In its critique of the RSAP, Ecology Ottawa said “not even hinted at” are “bolder ideas such as car lane reductions, car-free zones, mandatory changes in street design and vehicle restrictions” such as banning large trucks from downtown.

“Other cities are experimenting with these, and much more ambitious ideas, as we speak,” the organization added.

According to city staff, Ottawa records an average of 2.8 fatal injuries per 100,000 population — a notably smaller rate of deaths compared with Canada’s average of 5.8.

Mayor Jim Watson highlighted this safety achievement in a statement about the issue, but also noted that reaching zero fatalities remains the end goal.

“Making roads safe for all road users is a priority in Ottawa,” Watson said. “While I am pleased that we have a fatal injury rate that ranks among the lowest in the world, even a single fatality is one too many. We will continue to work towards zero fatalities and major injuries in our city. This plan will direct our actions to get closer to that goal.”

City staff have also identified the most dangerous intersections across Ottawa, with Bank Street and Heron Road the No. 1 site for collisions.

In addition to reducing the collision rate, Watson and Stephen Blais — chair of the transportation committee — said the plan for the third stage of the RSAP will priorize safety reforms in four categories: pedestrians/cyclists, rural areas, intersections and high-risk drivers.

The plan also recommends that the city should “eliminate right-on-reds where bike lanes are present,” develop “safe, segregated, protected bike lanes” on many more streets and reduce speed limits in residential areas to 30 km/h.

A leading advocate for safe cycling said these kinds of requirements should be a priority to accelerate the city’s push towards a zero-fatalities vision.

Bike Ottawa board member Barbara Greenberg attended the Dec. 4 meeting of the transportation committee and urged councillors to create a city in which cyclists wouldn’t fear for their lives when riding on busy streets.

“We think that biking should be for people of all ages and abilities. We try to encourage city councillors and city staff to build so that this can be encouraged,” said Greenberg.

“Ideally, we would like to see ‘8-80’ — which means anyone from age eight to 80 would feel comfortable riding on a road, on a bike. It shouldn’t be abnormal for someone in that age range to be on a bike.”

For Greenberg and others at Bike Ottawa, changing the speed limit in residential areas to 30 km/hour is a good decision to keep neighbourhoods safe. But she added that working as quickly as possible towards #VisionZero is important.

“No one should have to pay for their life on the road, because we all deserve to get where we’re going safely,” said Greenwood.

The city’s plan to reduce road deaths was approved at the Dec. 11 city council meeting.

Born in the Netherlands, Moor moved to Canada in 1998. He has been taking trips back to his home country to document the way safe cycling has been integrated into road networks over the past 21 years.

“We’re kind of late to the game,” Moor said of Ottawa’s cycling infrastructure in comparison to that seen in Netherlands.

But the important thing, according to Moor, is that the city should look at every aspect of improving safety.

“If you read between the lines, you will see there’s also attention to high-risk drivers —  because pedestrians and cyclists don’t kill people. It’s the drivers who usually kill people in their cars,” said Moor.

Moor also noted that while a very small percentage of the population are “at-risk” drivers, the laws and infrastructure must be adapted in order to focus on everyone’s overall safety, including cyclists, pedestrians and drivers.

In order to implement the third stage of the RSAP, city staff have proposed increasing the initiative’s budget from $25 million to $27.5 million, according to the 2020 draft capital budget.

To help refine the goals of the plan, the city is inviting community members to register their opinions about the transportation master plan through an online questionnaire.