6 days ago 0 6 min read
We use cookies to provide a personalized experience for our users. By continuing to browse this site, you give consent for cookies to be used.
Got it!
Home > News > Ottawa > ACORN Ottawa pushes NCC for more affordable housing at LeBreton Flats 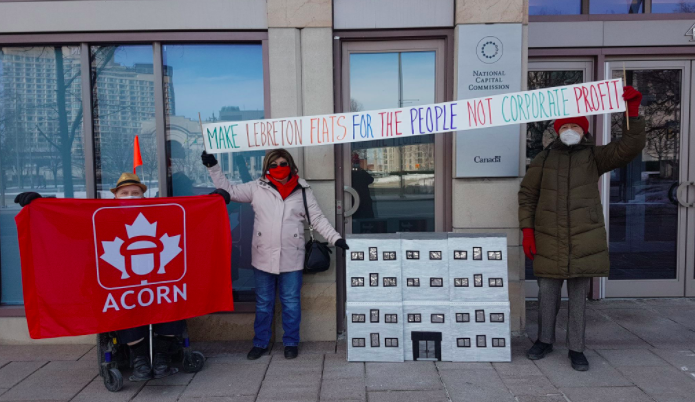 Protesters from ACORN Ottawa are urging the National Capital Commission to respond to a series of demands to ensure adequate levels of affordable housing as part of the LeBreton Flats redevelopment just west of downtown.

In January, ACORN Ottawa released a report on its vision for the future of LeBreton Flats, highlighting major areas of concern — principally affordable housing — with 15 recommendations to the NCC.

Because the commission did not respond to the ACORN report, members of the group decided to gather at Confederation Park and then march to the NCC’s nearby offices to turn up the pressure last month.

Determined to get some answers, the protesters held a banner — “Make LeBreton Flats for the People Not Corporate Profit” — and displayed the ACORN flag. The masked and socially distant activists then began chalking up sidewalks with their messages.

“We’re getting to the point where it has been over two months since the report, and they haven’t given us anything substantial other than nice little emails saying they’re working on it,” said ACORN Ottawa Centre chapter president Blaine Cameron. “They think they can get away with it.”

ACORN Ottawa members’ main concern is the affordability of those residential areas.

The group conducted a community survey that drew input from about 300 people. The goal of the survey and the report that followed was to rekindle dialogue between the NCC and local marginalized community members about the urgent need for affordable housing, ACORN Ottawa says.

“The NCC’s definition of affordable housing is out of touch despite it being the number one priority for the community,” ACORN Ottawa stated ahead of the protest. “ACORN members are demanding LeBreton Flats have 35 per cent affordable housing in perpetuity run by nonprofits, community land trusts or social housing providers and more.”

Many of those who participated in the survey agreed that affordable housing should be a major pillar in the development of the area.

The NCC has yet to provide a clear, fair definition of what affordable housing will mean at LeBreton Flats, said ACORN Ottawa.

Katie Paris, the NCC’s director of the LeBreton project, says the project is “a great new opportunity for this community to have a place in a brand new building, at below-market rents. It’s actually quite an achievement.”

“Below-market rent is an insufficient definition of affordable housing,” said Cameron. That definition, she noted, could see people paying up to 80 per cent of the market cost.

“The market has failed us,” Cameron added. “In a city that already has a declared housing crisis … we would prefer the recognition of new standards.”

“A far better definition would be rent geared to income wherein one’s housing cost wouldn’t exceed 30 per cent of their income and would include deep affordability for low-income people and those on social assistance,” she said. “Let’s not forget this is public land we’re talking about — we can do so much better. We want an integrated community for people of all walks of life.”

ACORN is also seeking to have the NCC’s vague “below-market rent” scrapped in favour of the group’s rent-geared-to-income model, which would put affordable housing within reach of many more people, said Cameron.

Other recommendations included ensuring affordability that lasts permanently, planning the development to better reflect the city’s declared housing and homelessness crisis, greater accessibility of housing options, and a stronger plan to have individual housing developments with a mix of units affordable to different income brackets.

Cameron said ACORN’s vision for LeBreton Flats reflects the fact that the area was once a working-class neighbourhood where people of all walks of life lived together — until they were displaced by the federal government as part of a 1960s “urban renewal” project.

Instead, after thousands of working-class residents were evicted, LeBreton Flats was left vacant for the next 40 years.

“We can’t continue to demolish low-income and working-class neighbourhoods like Manor Village or Herongate and then exclude low-income people from their futures,” said Geri Stevens, co-chair of ACORN Ottawa Centre, referring to present-day local neighbourhoods where residents face displacement pressures. “Many people know about these two stories of mass evictions, but it’s easy to forget that that’s what happened to the people of LeBreton Flats 60 years ago.”

Stevens said she hopes that she could one day live in the redeveloped downtown neighbourhood. “It would really be great if my income didn’t bar me from being able to live in a future LeBreton Flats.”

Bargain hunting group stretches dollars for charity even during the pandemic

In The News: Tuesday, April 20