2 weeks ago 0 1 min read
We use cookies to provide a personalized experience for our users. By continuing to browse this site, you give consent for cookies to be used.
Got it!
Home > Arts & Culture > Museums and galleries > Archive and history museum team up to offer ‘Unexpected!’ look at Canada’s past 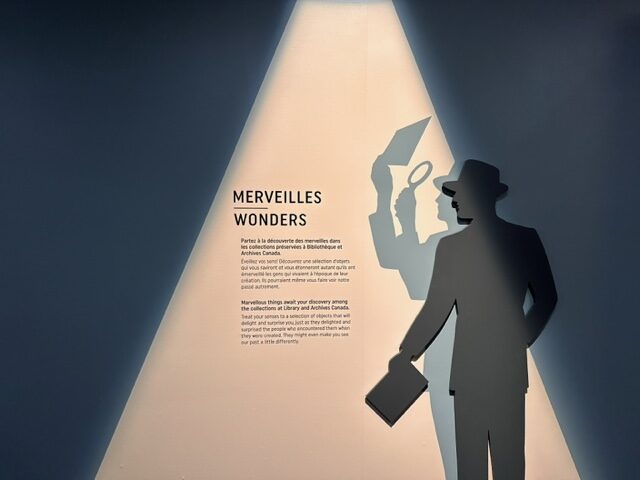 Guests are welcomed into the first section of the exhibit "Unexpected! Surprising Treasures from Library and Archives Canada." The show will be at the Museum of History until Nov. 26.. [Photo @ Gail Pope]
Arts & Culture

Archive and history museum team up to offer ‘Unexpected!’ look at Canada’s past

Carefully selected from the shelves and vaults of Library and Archives Canada are 36 intriguing finds that make up a new exhibit at the Canadian Museum of History.

The discoveries include a collection of cryptic love notes from more than 150 years ago, an optical illusion portrait of a Canadian Army unit and their 11-legged dog friend and even a book that can tell the current time in any country in the world.

Unexpected! Surprising Treasures from Library and Archives Canada will be at the Gatineau museum until Nov. 26.

‘Archivists and librarians and curators spend days sorting through boxes, and every now and again — maybe every 100th one — you find something that really stands out.’

The project started in 2016, with experts from Library and Archives Canada and the history museum collaborating to create what they describe as the perfect viewing experience. The dimly lit, soundproof exhibition room takes a visitor through three different sections of wonders, secrets and mysteries. Each section has unique sensory elements that help bring the individual pieces to life.

The LAC’s curator, Forrest Pass, explained that it takes a lot of work and thought to choose the best pieces to exhibit. Pass said that sometimes the simplest of pieces can be the most fascinating.

“Archivists and librarians and curators spend days sorting through boxes and every now and again, maybe every 100th one, you find something that really stands out,” he said. “But the main consideration when putting an exhibit together is to think about different audiences. We knew we wanted to have something that represented our Indigenous collections, which was showcased on the map of the Aivilik Region (of central Nunavut). We also wanted to highlight something that spoke to women’s history like the diary of Annie Affleck (wife of 19th-century prime minister Sir John Thompson). It was also about incorporating things for an audience of cat and dog lovers and children.”

One of Pass’s favourite pieces is a figurative representation of King Solomon’s Temple made by an unknown artist. Each of the objects in the photo symbolizes a specific meaning, rooted in Masonic teachings.

“This is a 19th-century painting that would’ve been used in a Masonic lodge to instruct new initiates about their teachings. It is probably the oldest of its kind in Canada,” said Pass. “During the initiation project, the candidate would move from floor to floor and there would be objects that represented specific lessons. The idea was that as you moved floor to floor, these objects would help the candidate connect all the lessons they had learned.”

Claire Champ, creative development specialist at the Canadian Museum of History, said she was thrilled to see the project take flight after so many years of planning.

“The idea of (similar) artifacts was originally to create a visitor experience that takes you through the sections; one that creates a sense of wonder and another that explains what secrets have been revealed and finally mysteries that kind of leaves visitors with the idea that we still don’t know everything.”

For more information, visit the Canadian Museum of History website and see below for more details about some other finds displayed in the exhibit.

In the late 1960s, a cardboard device was created by Henri Bergeron to echo the same effect as a person cupping their ears. Bergeron’s thought was that it would help with pronunciation skills for people for whom English is their second language. [Photo © Gail Pope]

This is one of the encrypted love letters sent more than 150 years ago between Annie Affleck and John Thompson, who served as Canada’s prime minister in the 1890s. The future husband and wife originally started using the code as young lovers to avoid the disapproval of their parents. [Photo © Gail Pope]

Named “A Fool’s Paradise,” this map still puzzles historians to this day. They have yet to identify what the unknown maker was trying to portray, but most people believe the cap symbolizes a jester’s hat, and that the author was trying to be humorous. The painting dates from as far as the 1500s. [Photo © Gail Pope]

An 11-legged friend appears to have joined a unit in the First World War. The effect was created when the dog was photographed while moving. The dog made it through several frames before the final picture was captured, causing the illusion. [Photo © Gail Pope]

This book, centuries old, can indicate the precise time anywhere in the world at a given moment. There are very specific instructions for moving the arrows to the proper degree line so that a time can be found. [Photo © Gail Pope]

An interactive map that showcases parts of Canada in 3D through a zograscope. This interesting design uses a magnified lens partnered with a mirror that reverses the original image, giving the illusion that it is a 3D photo. [Photo © Gail Pope]

Home for the holidays, amid enduring childhood triggers for my OCD