3 weeks ago 0 4 min read
We use cookies to provide a personalized experience for our users. By continuing to browse this site, you give consent for cookies to be used.
Got it!
Home > Community > Indigenous > Bad vibes: Critics decry the cultural appropriation of Indigenous plant medicines and smudging  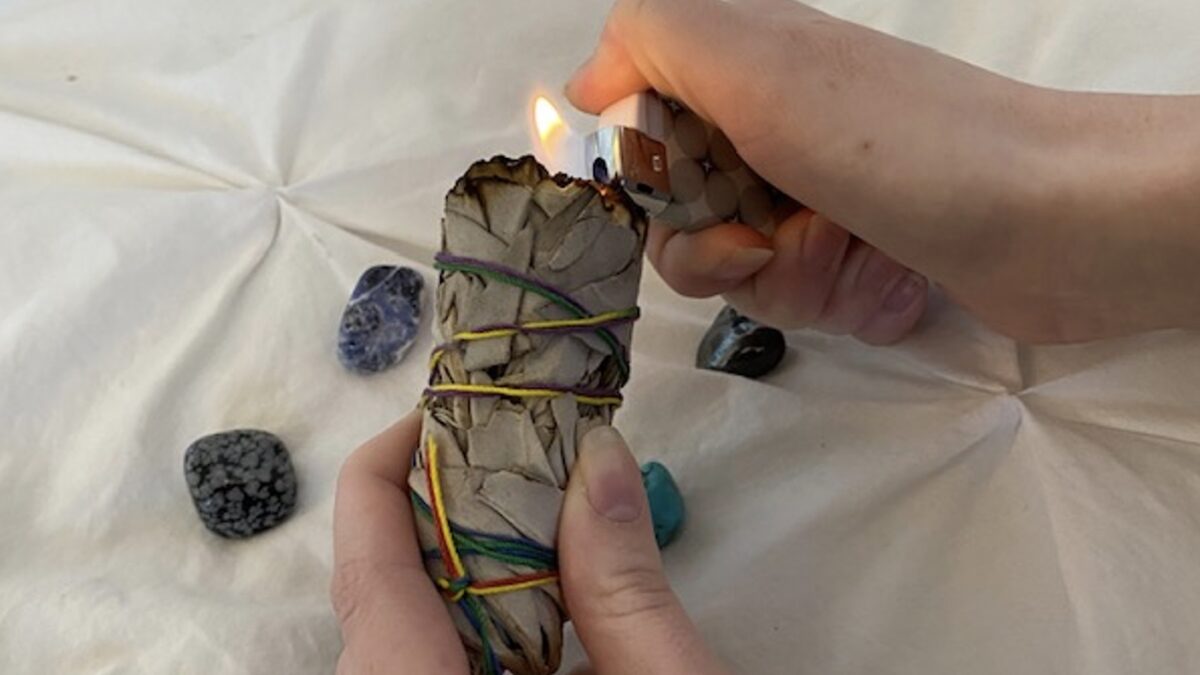 A white sage smudge bundle being lit. Rituals with Indigenous roots are being appropriated by some who embrace spiritual practices. [Photo Hibah Salaria]
Indigenous

It’s a sunny day inside the Garden of Light spiritual shop and magic is in the air. Rays of light bounce off the glinting crystals stationed by the window, brightening the room and entrancing passersby. Past the glimmering crystals, a customer circles the display of metal sound bowls. She picks up a wooden mallet, or ‘striker,’ and gently taps the bowls, creating a cascade of high-pitched tones that resound throughout the store. The aroma of white sage wafts through the air, filling the store with a savoury herbal scent.

It’s a typical Friday at the shop in downtown Ottawa, and business is booming. Interest in new-age spirituality has been soaring in recent years — especially interest in Indigenous practices such as spiritual cleansing through smudging.

Smudging is a tradition that uses the smoke of different plants to ceremonially cleanse a space of negative energies, making it ready for ritual use. The practice uses a variety of plant medicines, the most common ones native to Canada being tobacco, cedar, sage and sweetgrass. At the Garden of Light, white sage is the most popular plant medicine.

“We’ve definitely seen an increase (in white sage purchases) in the last three to five years. In general, I think there’s a respect and there’s an understanding for it,” says Nilasha Broughton, an employee at the Garden of Light.

“Mostly when we see people coming in who are moving (house), who are looking to cleanse negative energies, that’s (white sage) usually what they’re looking for,” says Broughton.

In recent years, white sage, sweetgrass, cedar and other traditional plants used in smudging have been flying off the shelves in stores across North America as the new-age movement — and the Indigenous spiritual practices it embraces — soar in popularity.

A startling six in 10 Americans  subscribe to at least one “New Age” belief, according to a 2018 study by Pew Research Center.This has led to a boom in the sale of products and services related to new-age spiritual practices. For example,the “psychic services” industry  exceeded $2.2 billion U.S. in revenue in 2021, according to IBISWorld, a U.S.-based market research company.

Now everyone, from yoga instructors to the Mom down the street looking to cleanse her new home of bad vibes, is taking up smudging.

But should they? The rising popularity of smudging by non-Indigenous people raises a host of ethical questions, from concerns about cultural appropriation and the commercialization of a spiritual practice, to environmental depredation.

White sage is relatively rare, and grows mainly in Southern California and northwestern Mexico. The plant is not officially classified as endangered but is legally protected in certain reserves and parks. As the smudging craze began to take off in recent years, a black market in white sage poached from protected areas has taken off. Over the last five years, more than 9,000 kilograms are estimated to have been poached from the Etiwanda Preserve, according to the California Native Plant Society. In one instance alone, rangers at the preserve in Rancho Cucamonga, San Bernardino County, confiscated more than 450 kilograms of illegally harvested white sage, the society reported.

“White sage is a desert plant, so we don’t have that much of a desert climate here,” she says, noting that, while there are a few producers in Alberta who grow it commercially, “it’s difficult to get a huge harvest in Canada, so that’s why it’s coming from different places.”

The Garden of Light buys white sage from a farm in Alberta, but has to supplement that product from a supplier who “doesn’t know where they’re getting it; it’s just a general supply,” says Broughton. Some suppliers get white sage from individuals who sell it to them, so they can’t always verify where their sources are getting the plant.

While the shop does its best to source white sage ethically, it’s not always possible, she adds.

“Usually because there’s a demand, we’ll source it from wherever we can get it.”

Lorraine Whitman, president of the Native Women’s Association of Canada, says non-Indigenous suppliers who source plant medicines unethically disrespect both the tradition and the land.

“You know, I see some people going out and not fully knowing and understanding the history behind the medicine. And one is our sage. They’re going out on the land, (and) they’re raping the land of white sage that grows in the wild.”

“You know, I see some people going out and not fully knowing and understanding the history behind the medicine. And one is our sage. They’re going out on the land, (and) they’re raping the land of white sage that grows in the wild.”

Indigenous people learn from a young age to respect the land, she adds: “What’s always been taught to us as younger people is that you only take what you need, but they’re not doing it.”

Whitman also worries about “the misappropriation of our medicines” by non-Indigenous people who don’t bother to try to understand the spiritual practices they adopt.

“In my personal opinion, smudging is a ritual … that needs to be done respectfully. You just can’t go and do it on a whim. And I’ll see people go, ‘I’m gonna smudge my house today. I’m going to smudge me,’ and it’s not taken seriously in that perspective. It’s done inappropriately and disrespectfully, using Indigenous culture with our medicine,” she says.

Don Kelly, an Ottawa-based Ojibway comedian, says he doesn’t have a problem with non-Indigenous people using plant medicines — but only if they do so in an informed and respectful manner.

The ethical use of plant medicines should “start with an open mind, open heart and open spirit taking part in the tradition, as well as learning what they mean and not simply mimicking,” he says.

“I’ve seen online you can buy smudging kits, which to me is completely antithetical to the entire idea of wanting to respectfully take part in a tradition … That’s the kind of appropriation we’re really pushing back against and it’s not that we don’t want to share the traditions, but it has to be done in the right way and for the right reasons,” he says.

“I think for people who are genuinely interested, and willing to take the time to learn, not just how to do it, but why you do it and when you do it, … there are many elders and traditional people who are willing to share that,” he says.

Allan Ryan agrees. A retired professor and former New Sun Chair in Aboriginal Art and Culture at Carleton University, he says that non-Indigenous people interested in plant medicines should research the medicines and traditions they are interested in, and consult Indigenous sources.

Even a simple online search can help you find Indigenous people who want “other people to know about these particular plants and their uses,” he noted. “You can find Anishinaabe around here, people that know about them. You could ask elders … if you’re interested in plant medicines … then find out what Indigenous people use them for,” he says.

Respect is an important part of appreciating Indigenous traditions, he adds. “Appropriation is two things: It’s disrespectful, and it’s paying (for) things or taking things without permission, or passing it off as your own, whether it’s an image, whether it’s a name or a song.”

When planning to get plant medicines, he says that people need to ask themselves, “ ‘Is this culturally sensitive? … Is there an Indigenous person in charge of all this? Who’s doing the selling and distributing? Does it seem like it’s respectful?’” he says.

As for the commercialization of white sage, sweetgrass and other medicinal plants, opinion is divided on whether it is ethical to sell spiritual materials.

Drew Taylor, an Ojibway author, playwright, and journalist from the Curve Lake First Nation, north of Peterborough, Ont., says he doesn’t object to non-Indigenous people using medicinal plants if they do so mindfully: “I think if you come to it with a clean heart and a clear purpose and an understanding of where it comes from and how they are used and why they are used, … I think they are open for all people to use them.”

But the commercial sale of plants used for spiritual cleansing is “a grey area,” he says.

“You’re not supposed to charge for a sweat-lodge or any of that type of thing, yet I see many stores and First Nations communities selling sage, selling sweetgrass etc.”

“You go to a powwow, right, and there’s a whole row of native people selling sweetgrass, sage, all those types of things. It’s at (this) event that is supposed to celebrate Indigenous culture and Indigenous spirituality, and they are selling medicines. So that sort of gives you the impression that, ‘Well, I guess it’s OK,’ ” he says.

Kelly says that, traditionally, medicines aren’t supposed to be sold.

“Well, my opinion is that traditionally, I don’t recall anyone ever selling medicines. Often you would trade, (and) often out of respect, you would offer medicines,” he says.

“I do think we need to understand that they’re not selling the medicines so to speak, (but) the work that goes into the gathering of the medicines. If anyone’s familiar with going and getting sweetgrass, there’s a lot of work. There’s time, there’s dollars for the fuel, they have to dry it, they have to braid it, and they do it all in a ritual manner,” she says.

One of these stores is Beaded Dreams in Ottawa. The shop sells Indigenous-made products, crafting materials, and of course, plant medicines. It often carries white sage, sweetgrass and other herbal blends for a variety of uses.

Ryan says that before purchasing a plant medicine, people should ask themselves a few important questions.

“Do Indigenous people get (the benefit)? … That’s a really simple concept. Who benefits financially from this transaction?” he says.

Ultimately, the most important issue is whether or not non-Indigenous people interested in smudging do so in a way that honours Indigenous cultures and traditions, Kelly says.