3 days ago 0 4 min read
We use cookies to provide a personalized experience for our users. By continuing to browse this site, you give consent for cookies to be used.
Got it!
Home > News > Ottawa > Banksy 360 in Ottawa takes the artist’s work to different level 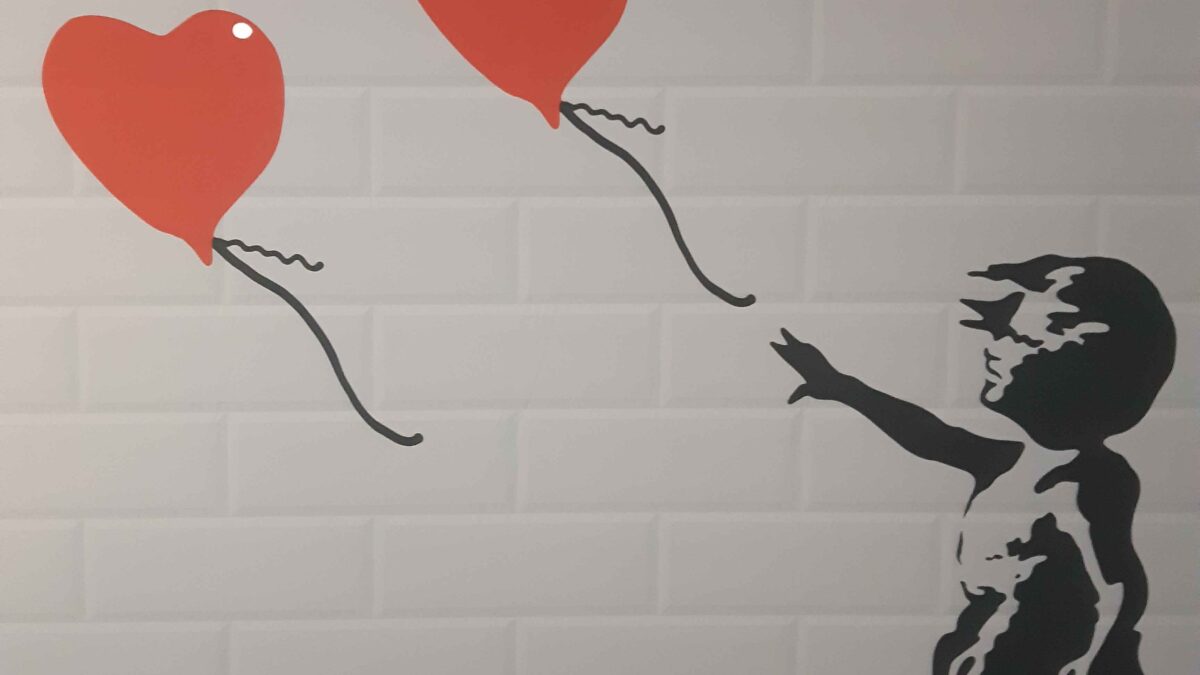 Girl with Balloon by Banksy as seen in the exhibition Banksy 360. [Photo @ Rodaina Ibrahim]
Arts & Culture

“This revolution is for display purposes only.” This is one of many quotes you will hear over the speakers when you enter a new exhibit in the Aberdeen Pavilion.

After passing through a small dark hallway, you will be greeted by a red elephant.

A big red elephant with gold markings to be more specific. The walls are covered with stenciled rats, a girl on a swing and another girl reaching for a heart-shaped red balloon.

All of these images were created by Banksy, the anonymous graffiti artist from Bristol, England, who has become a global phenomenon. The artist is known for controversial and thought-provoking anti-authoritarian graffiti art.

“It takes a lot of guts to stand up anonymously in a western democracy and call for things no-one else believes in like peace and justice and freedom.”

Marc Leverton is the author of Banksy Myths & Legends and one of the people involved in the creation of the exhibit. He says the show is a “remix” of Banksy’s works.

“As long as you try to stay true to the spirit of his work, it should be successful,” he said, talking about the advice he gave to the Ottawa team responsible for the exhibit.

The exhibit takes Banksy’s works, animates them and turns them “into something huge.”

The viewer does get a good grasp of the different themes Banksy discusses in the work. It becomes clear Banksy takes what is terrible in society and reflects it back on us using graffiti and dark comedy.

After the information room, you enter the exhibit room where the presentation “takes his original pieces and animates them, and turns them into something huge,” Leverton said.

And he couldn’t be more right. The ambient sound is not just music, but a mix of news anchors and Banksy talking about his work and its effects.  The music that plays takes a more serious and modern tone, matching Banksy’s art.

The background for most of the paintings is a wall, reflecting that his works are usually stenciled on walls and public areas.

At the beginning of the show, the four screens are filled with small old TV screens broadcasting news anchors talking about Banksy’s work and the controversy it creates. A wall slowly covers the screens from the top. Graffitied on it is the name of the exhibit surrounded by flying rats and rats hanging from the wall.

Green liquid covers the wall, turning black showing another wall. The wall is slowly covered in graffiti, the animation showing the steps in each drawing.

A lot of work has gone into the graphics, especially the animation of Banksy’s works.

Take for example The Flower Thrower: In the original, a figure is prepared to throw flowers, but in the exhibit, he actually throws them. His arm swings forward, the flowers leave his hand and fly in every direction.

Not all of Banksy’s works are in the exhibit. The choice of pieces was also dependent on how it could be animated. The creators wanted to include his more popular works, while adding some lesser known works as well, Leverton said.

It is an impressive display that makes the works more immersive and relevant. The pairing of news, art and Banksy’s quotes puts the pieces in context.

Other Banksy shows have been more traditional. The Ottawa team wanted to go with something more interactive, with which Leverton agreed. The location was also chosen with Banksy in mind.

“We wanted to stay true to Banksy’s ethos of taking you to unusual and interesting places,” he said. The Aberdeen Pavilion was ideal, he said.

The goal of the exhibit is to introduce Banksy’s works to a new generation and to places he will most likely not visit with a work.

“He doesn’t have a big history of coming and doing pieces in Canada, so I think Canada is a good place to reshow his work and remind people what he is about,” Leverton said.

Banksy has had an undeniable impact. His appeal comes from his anti authoritarian stance in most of his works.

Notably, he has many pieces talking about the police. Flying Copper shows an emotionless smiling face, small wings and a police officer in full gear. This reflects the detachment of police officers, and the contrast between the wings and the full gear reflect the lack of trust people have in them.

The British monarchy has not been spared from Banksy’s criticism. He famously depicted the Queen as a chimpanzee, adding that “the highest position in British society is not a reward for talent or hard work, but simply handed out with the accident of birth.”

He also takes many shots at consumerism works such as Black Friday, Christ with Shopping Bags and Sale Ends Today.

Banksy is not the only graffiti artist, but what makes him stand out? Leverton thinks it’s because Banksy is bringing his works to in different parts of the world. Most graffiti artists stay within their neighborhood, rarely expanding to other areas.

“[Banksy] has always gone a bit bigger and further than artists out there. He always stayed ambitious, always looking to do the next big thing.”

“We can’t do anything to change the world until capitalism crumbles. In the meantime, we should all go shopping to console ourselves.”

As the exhibition explains: “He has become the reluctant champion of the dispossessed, the desperate, the war-torn, the hopeless and the indigent. He is the enemy of the marketers, the power-holders, the righteous, the arms merchants, the Kardashians, the status seekers and their deputies. (…) If Banksy is anything at all, he is relevant.”

If you are looking for something thought-provoking and different, this is the exhibit for you. The Banksy 360 exhibit runs Tuesday, Wednesday, Friday and Sunday from 10 a.m. to 8 p.m.