4 days ago 0 8 min read
We use cookies to provide a personalized experience for our users. By continuing to browse this site, you give consent for cookies to be used.
Got it!
Home > News > Science > Canada’s Borer War: Ottawa on front line in fight against ash-killing beetle that has wiped out 50,000 trees 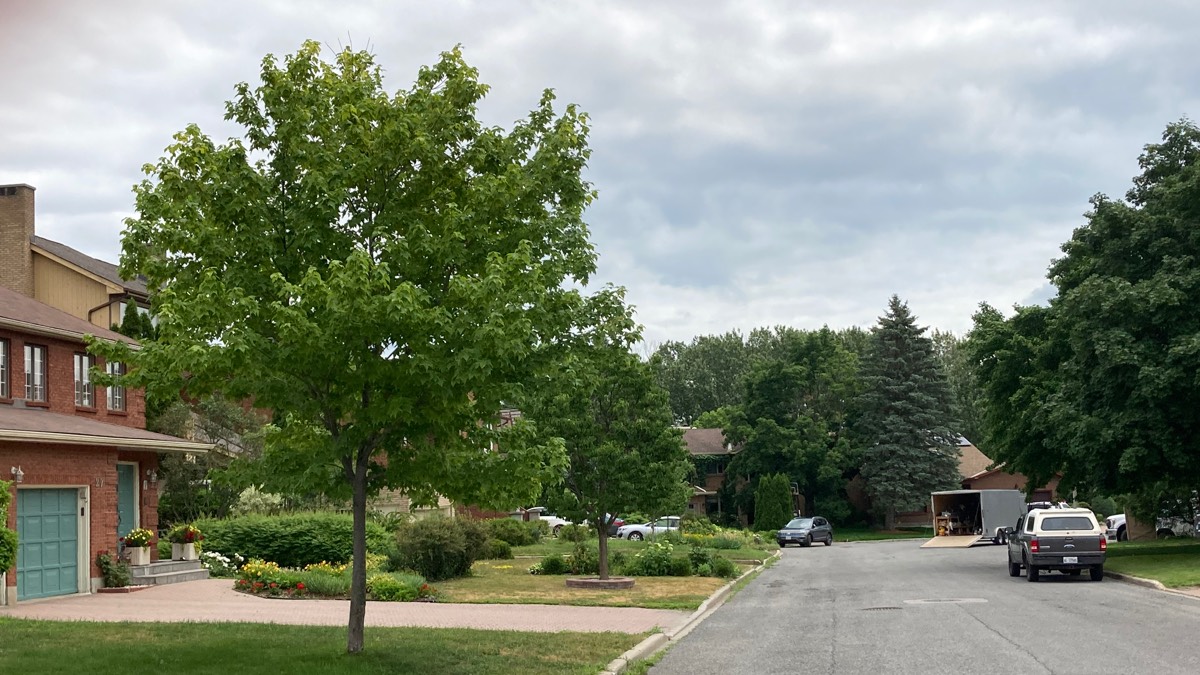 Ottawa's urban forest has taken a serious hit over the past decade as a result of the invasion of the emerald ash borer. Since arriving in Ottawa in 2008, the beetle has forced the removal of more than 50,000 ash trees in the capital. [Photo © Bailey Moreton]
Climate Change

Dan Cooper was working in forestry when the emerald ash borer arrived in Ottawa in 2008.

Even with a decent plan in place to stop the spread of the infestation, the invasive beetle — native to northeast Asia — caused extensive damage to forests throughout Southern Ontario.

“I’m not a defeatist,” he said. “I don’t give up easy — I’m always wanting to try to do things — but having lived through it here and seen it go, I just I understand how hard it is.”

The emerald ash borer first hit Canadian trees in Windsor, Ont., in 2002. The bug has since spread across all of Eastern Canada, from Winnipeg to Halifax.

Since arriving in Ottawa in 2008, the emerald ash borer has forced the removal of more than 50,000 trees, leaving about 235,000 ash trees across the city.

Emerald ash borers normally have a one-year life cycle, but some can take up to two years to mature. The beetles lay their eggs on the branches of ash trees. When hatched, larvae bore into the tree to feed on the inner bark. This disrupts the flow of nutrients within the tree, causing it to weaken and eventually die if left untreated.

It only takes a few of these insects to kill a tree. The ash — the only species of tree infested in North America so far — is particularly vulnerable.

While the city has responded quickly to the threat, protecting a number of trees, it can’t stop the spread of the bug across the urban forest, according to Chris MacQuarrie, a federal researcher with Natural Resources Canada.

“Ottawa is sort of into the next phase of transitioning that forest to a different one where ash isn’t quite as common and dealing with those dead and dying ash that are left on the landscapes,” he said.

Elsewhere in Canada, the fight against the borer is just beginning. As the beetle’s feeding season resumes, the ash trees in the New Brunswick city of Edmundston have been decimated.

Several counties in New Brunswick identified the insect’s presence as early as March. But because the borer is so hard to track, communities such as Edmundston may already be playing catch-up.

“Once it’s there, once you start to see the signs, it’s probably been there for a few years,” Cooper said. “There just isn’t a lot you can do about it.”

Some researchers fear climate change will allow the pest will spread to new territory, threatening more Canadian cities. With fewer days of extreme cold, more beetles might survive the winter, allowing them to migrate further north.

Cooper and MacQuarrie say there is little evidence to support this theory. The latter explained that temperature change will be too unpredictable to open the north to the emerald ash borer.

Communities in New Brunswick also have the benefit of learning from other cities who have dealt with the problem for years, added MacQuarrie.

Popular approaches to dealing with infestations include releasing parasitic wasps to kill the beetles, injecting trees with a specially-designed pesticide and removing infected and dead trees.

Finding a use for the ash trees that are cut down is important, said Cooper. While ash is commonly used for wood for residential fireplaces, demand is limited.

For Cooper, replacing trees that have been cut down is the most important response.

The Ash Tree Replacement Program — run by the City of Ottawa and the National Capital Commission — helped Ottawa landowners remove and replace infected ash trees on their properties. In 2018, 469 trees were removed through the program.

But finding funding for tree treatment and replacement can be challenging for communities, according to Cooper.

We’ll plant 2 billion trees over the next ten years. That’s it. That’s the tweet.

But conservation organizations and governments should have a reserve fund to ensure they can afford to replace damaged trees, said Cooper.

“Planting these other trees will at least help maintain forest cover and habitat and carbon sequestration,” he said. “I wouldn’t say at the same rate, but it’s a very effective way to help offset those losses in some way.”