4 days ago 0 6 min read
We use cookies to provide a personalized experience for our users. By continuing to browse this site, you give consent for cookies to be used.
Got it!
Home > News > Ottawa > City selects South Korean artist’s ‘cozy’ depiction of home as public art for Centretown road reconstruction 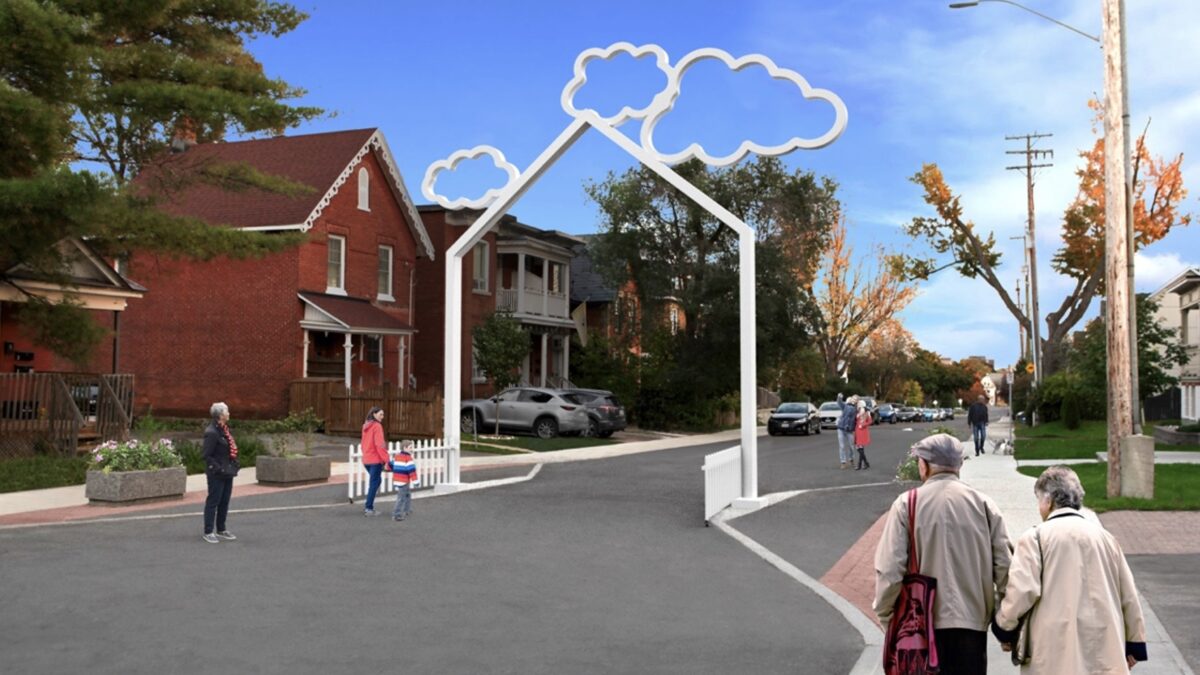 The City of Ottawa has selected the sculptural artwork titled "Home" by South Korean artist Sujin Lim to be installed as the public art element during the reconstruction of Cambridge Street North in Centretown this year. [Image courtesy Sujin Lim/City of Ottawa]
Arts & Culture

By EmmaHolloway, 8 months ago 0 4 min read

The dreamy outline of a house and puffy clouds will span Cambridge Street North as the public art component of the reconstruction of the Centretown roadway this year.

The city announced in January that Sujin Lim’s proposed piece, titled Home, was selected as the winner.

The artist’s submission “was selected for its conceptual and visual innovation and its sensitivity towards the site and its community,” the city said in announcing the selection of Lim’s entry in the competition.

“This symbolic take on the iconic shape of a house aims to represent the community members who make the vibrant neighbourhood of Chinatown their home,” the announcement stated. “This artwork will uniquely integrate with the streetscaping of Cambridge Street North and enhance the existing warm residential character.”

“This symbolic take on the iconic shape of a house aims to represent the community members who make the vibrant neighbourhood of Chinatown their home.”

Some previous works by Lim, an internationally recognized South Korean-born artist, include a public fountain in Switzerland called Water Square and a group of cloud-like sculptures in South Korea titled Silver Lining.

Lim’s winning piece in the Ottawa competition displays the outline of a house framed by clouds above and a white picket fence on each side of the street. This design is meant to portray, “an imaginary collective front yard,” said Lim, 42.

“I always liked how this house shape could show this notion of home and inclusiveness. One inspiration I had was that the street looks like a communal front yard.” She noted that clouds appear in many of her sculptures.

This piece is intended to extend a sense of welcomeness that Chinatown already portrays, she said: “One of the main concepts of this project is having an image of (a) home as a landmark. It can differentiate the cultural area and the residential area.”

When Lim visited Ottawa after being selected as a finalist for the Cambridge Street North competition, she sensed the enthusiasm within the multicultural Chinatown community. “It was really, really international,” said Lim. “It was something that I found super inspiring. Everybody loves that they live here. And it’s kind of their own home, although they (may) not (be) from this city.”

The artist said she hopes her piece is able to contribute to this sense of community.

Carlo Santurbano, known as “Consumedbycarlo” on Instagram, is an Ottawa influencer covering all things food and fun. “Sujin Lim’s piece will bring even more character to Chinatown’s already vibrant neighbourhood,” said Santurbano, adding that the piece could become a landmark that draws visitors to the community.

Santurbano said he believes the artwork will add character to the various businesses within the area.

“When I look at the piece it makes me feel a certain kind of cozy, and at home, just like how I’ve felt when dining in Chinatown,” he said. “Walking into one of the many mom and pop restaurants is like walking into their home, and you feel like part of the family.”

Somerset Coun. Catherine McKenney was not a part of the jury that selected Lim’s piece, but still: “I like it a lot.”

McKenney assisted the artist in grasping a better idea of the Chinatown area.

This meeting helped Sujin Lim to gain a better understanding of the efforts the local government is making to further develop the neighbourhood. “That really helped shape my approach” she said.

Construction of the artwork is scheduled to begin before the end of the year.

“We need to go through a safety and technical review to make sure we can install the fence,” she said.

IN THE NEWS: Tuesday, April 12