1 week ago 0 9 min read
We use cookies to provide a personalized experience for our users. By continuing to browse this site, you give consent for cookies to be used.
Got it!
Home > News > Ottawa > Climate protestors in Ottawa demand stricter action to curb emissions, carry message to Prime Minister’s Office 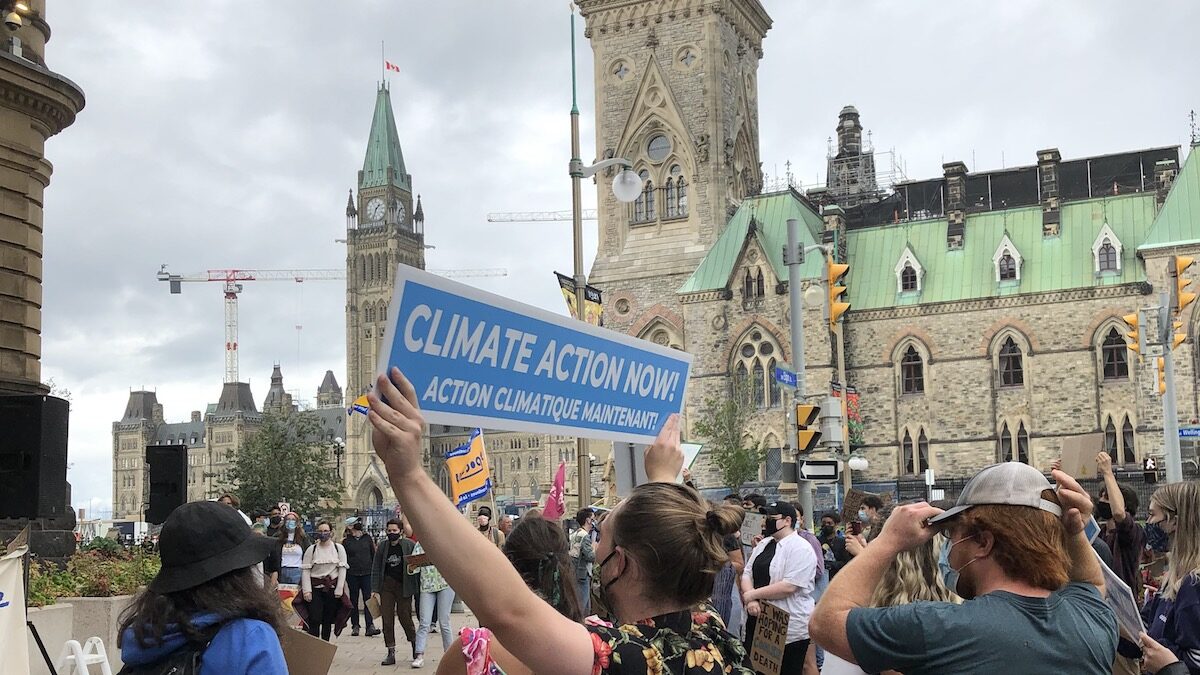 Climate change protests reach Parliament Hill on Friday, part of the global Fridays for Future movement. The demonstrators carried their message to the Prime Minister's Office at the corner of Wellington and Elgin streets. [Photo Courtesy of Jennifer Humphries]
Climate Change

Hundreds of protestors gathered at Confederation Park and marched to the Prime Minister’s Office in downtown Ottawa on Friday as part of a global demonstration demanding action to combat climate change.

The Sept. 24 “climate strike,” which drew thousands of protestors around the world, was organized by Fridays for Future, the international youth-led movement started by Swedish environmental activist Greta Thunberg.

Sarah Scott, a volunteer organizer for Ottawa’s chapter of Fridays for Future, said the goal of the demonstrations is to pressure politicians to implement measures to limit the effects of climate change. She said that she believes the Canadian government hasn’t done enough to limit emissions.

The Paris Agreement, which Canada and nearly 200 other nations signed at the December 2015 United Nations Climate Change Conference, set long-term goals to guide countries in reducing their emissions. One important goal was to limit the global temperature increase to two degrees Celsius or less within this century.

“If the world were to have the same emissions that Canada has right now, then we would be expected to have a three to four degree Celsius warming,” said Scott, detailing the disturbing scenario that motivated many people to come out and protest.

Protesters want to make sure the newly elected government — a continuation of the same Liberal-led government that signed the Paris Agreement six years ago — hears the demands and takes meaningful action instead of just making empty promises.

Scott said emissions in Canada have actually been rising in the past few years.

“If we had been having real climate action since, say, 2015, we wouldn’t have to make such drastic changes right now,” said Scott, expressing her disappointment in Canada’s track record. “But because we waited so long, now we have to do a lot more in a much shorter period of time.”

Severe forest fires in British Columbia this summer have been linked by experts to the warming effects of climate change in Western Canada. Scott added that Canadians may not even be seeing the most devastating effects of climate change yet, but those in the global south — who contribute the least to rising emissions — are already dealing with a range of catastrophic impacts.

“The climate crisis is already here,” said Scott. “There are people who are already out there dealing with the damage, like catastrophic flooding and heat waves and droughts. We have to do what we can here in Ottawa to help get the message out.”

Scott said it’s important to stay positive when dealing with the climate crisis: “It’s easy to be pessimistic and to feel like nothing is going to change. But that’s only going to happen if we stop taking action and if we stop trying.”