1 week ago 0 1 min read
We use cookies to provide a personalized experience for our users. By continuing to browse this site, you give consent for cookies to be used.
Got it!
Home > News > Social Issues > Fight against ‘anti-homeless architecture’ part of struggle to combat Ottawa’s affordable housing crisis 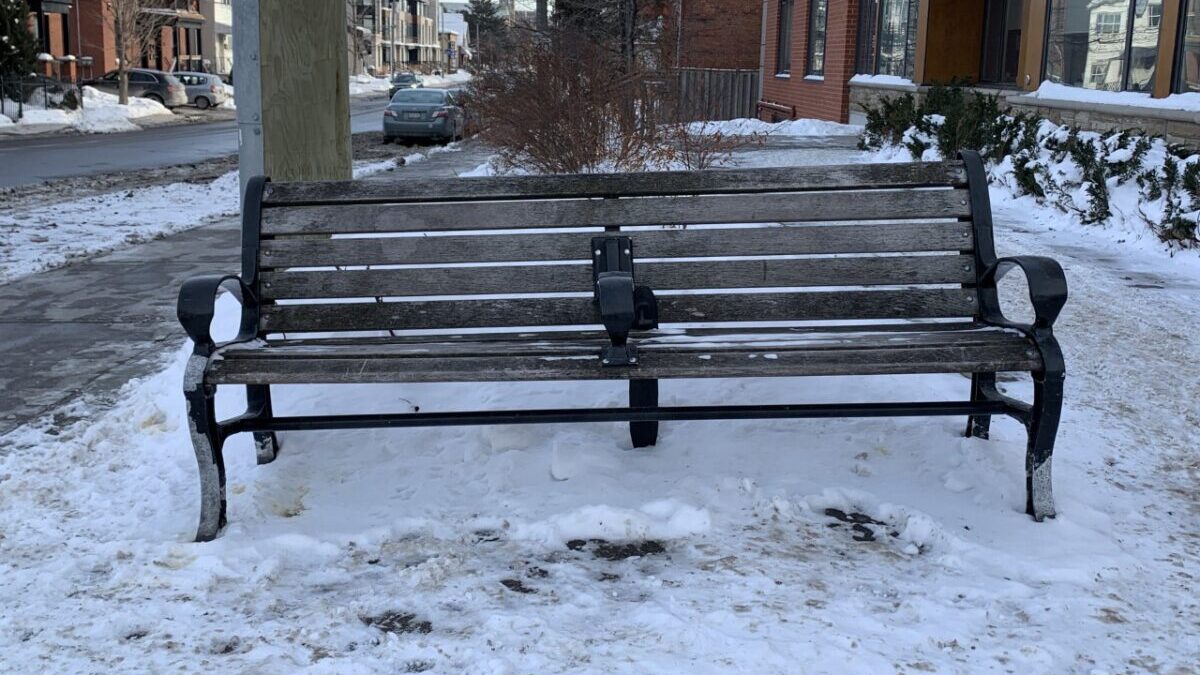 This anti-homeless bench on Booth Street is just outside the Somerset West Community Health Centre. The centre arm rest is in place to block someone from stretching out to sleep on the bench. [Photo © Bobby Eros]
Community

Somerset Coun. Catherine McKenney is on a mission to rid downtown Ottawa of “anti-homeless” street furniture and other urban features designed to discourage some of the city’s less fortunate residents from occupying public spaces.

Somerset Ward — encompassing Centretown, including the downtown core as well as Little Italy and Chinatown — has had a homelessness problem since most of its residents can remember.

Many in the neighbourhood have probably seen a homeless man with a metal pole on the front of his bicycle. He uses it to pitch his tent at night. Others might recognize the woman at the corner of Bronson and Somerset who plays guitar for change at the gas station.

These two people are as much a staple of the neighbourhood as the Chinatown arch or the ringing bells of Saint-Jean-Baptiste church. And so is the street furniture and other features designed to keep them in the shadows.

Anti-homeless architecture is considered to be any structure, addition, decoration or device made with the express purpose of inconveniencing homeless individuals. It can be something as small as a bar in the centre of a park bench that prevents homeless people from sleeping on them, to a speaker system set up beneath a bridge so that it’s too loud to rest.

Last fall, McKenney began pushing for the installation of homeless-friendly benches near the intersection of Bronson and Gladstone avenues.

“I worked with staff to find a solution that addressed accessibility with a third arm rest but (is) also long enough for someone to lie down,” McKenney tweeted on Oct. 26, including a picture of the two elongated metal benches. “Anti-homeless hostile architecture be gone! Ottawa can be a caring city 4 all.”

Sean Martin, a homeless man who has lived on the streets of Centretown since 2015, said the funding priority should be on creating affordable housing.

Martin frequents homeless-friendly services and locations in Centretown, including the Somerset West Community Health Centre. These places provide much needed services for homeless individuals, such as medical check-ups and vaccinations.

On a recent cold day, people congregated in the parking lot behind the health centre, waiting for appointments or just hoping to get inside somewhere warm. Graffiti covered the walls and profane slogans were scrawled along the dumpster.  It’s clear why Martin wants more funding to go into housing in Ottawa.

A number of the individuals were lying on the sidewalk behind the clinic, some staring at the sky. According to the Ottawa Neighbourhood Study, nearly six per cent of homes in downtown are unfit to live in; Martin says he also believes extra funding should also go towards fixing those dwellings.

Perpetua Cherubin, a placement student with the local branch of the social justice advocacy group ACORN — the Association of Community Organizations for Reform Now —  said she agrees an increased supply of affordable housing is badly needed in Ottawa.

“A lot of the time, space that could be used to help homelessness is not,” she said.  ACORN has put its focus on this problem by protesting so-called “demovictions” — the demolition and redevelopment of low-rent properties into expensive condos or high-rent apartments.

Cherubin applauded McKenney’s battle against anti-homeless architecture and said she believes increased funding for community housing and the replacement of urban infrastructure hostile to the homeless population is needed in Centretown.

“Both are really big issues, so I feel like you’d have to split funding and do the best you can,” said Cherubin. “If you put too much into one, then the other will falter — and then you’ll have even more people on the street.”

After 24 months of pandemic restrictions, are Canadians ready to let go of COVID-19 restrictions? A new study suggests they might be