3 days ago 0 1 min read
We use cookies to provide a personalized experience for our users. By continuing to browse this site, you give consent for cookies to be used.
Got it!
Home > News > Social Issues > Gift from the heart: Maximizing the blood supply in Ottawa 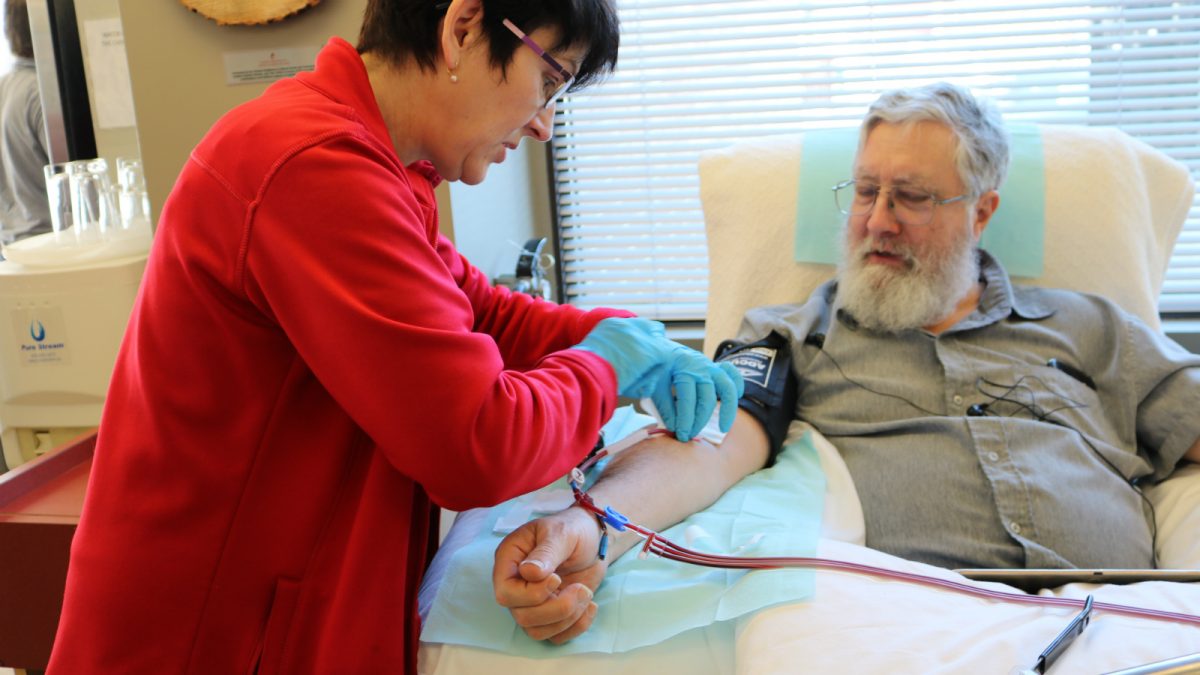 The platelets that Arthur Ham is pictured donating here only have a five-day shelf life and will be given to a patient in the Ottawa General Hospital immediately after the donation is completed. [Photo © Ellen Spannagel]
Canada

Gift from the heart: Maximizing the blood supply in Ottawa

Relaxing after donating blood, 23-year-old Emilie Grenier had a clear view of the deep snowbanks just outside the Canadian Blood Services clinic on Carling Avenue.

The previous day’s winter storm had closed post-secondary institutions as well as all primary and secondary schools across Ottawa. But the winter conditions didn’t deter the young outdoor enthusiast from donating.

“In the winter it’s cold and you want to be inside anyway,” Grenier said.

Grenier also knows that each donation has a major impact. According to the American Red Cross, one donation can potentially save up to three lives. Typically 450 ml of blood, or one unit, is collected in a donation.

But harsh weather takes a toll on donations, and it’s been a rough winter in Ottawa. According to Canadian Blood Services, 19 blood donations were collected at the Carling Avenue location on Feb. 13, the day before Grenier’s appointment — much less than the location’s daily target of 64 donors or better.

“Yesterday was pretty quiet in here,” said Glenna Gosewich, territorial manager for Canadian Blood Services in Ottawa. “We are constantly reminding people that there are empty beds over there — they’re not supposed to be empty.”

According to Gosewich, a leukemia patient needs up to eight units of blood each week. They and other blood disorder patients belong to the “scheduled” portion of blood bank reserves. In addition, hospitals must be equipped for unexpected emergencies. Gosewich said that after the OC Transpo double-decker bus crash on Jan. 11, 160 units of blood were used in surgery on the injured passengers. Hospitals are able to meet urgent need by accepting extra blood stock from nearby hospitals as needed.

To buffer the blood donation system to cope with routine and unexpected blood transfusions, Gosewich said that steady donor contributions are key. As the national not-for-profit management body of Canada’s blood product supply, Canadian Blood Services works on ways to remind Canadians of the importance of donation.

The blood system in Canada went through a troubled period in the 1980s, when tens of thousands of people were infected with HIV and hepatitis C from contaminated blood products. The crisis resulted in a public inquiry led by Justice Horace Krever. His report was released in 1997. Canadian Blood Services was founded the following year.

As recently as December 2018, Ipsos polling showed that Canadians have moved on from tainted blood fears, with 61 per cent having little or no awareness of the blood contamination crisis. According to Canadian Blood Services, there has not been a recorded instance of a blood-borne infection from hepatitis C or HIV since 1998.

Meanwhile, Canadian Blood Services has moved into the digital age, harnessing interactive tools to engage with donors. On the organization’s website, staff are available through a live chat from 7 a.m. to 10 p.m. ET Monday to Friday. Donors can also track their personal statistics on the GiveBlood app, which people can use to locate the nearest blood donation clinic on an interactive map, book a donation appointment, as well as be notified of their appointment time. If donors consent to submitting their personal information, the app will also track their number of blood donations, blood type and donor card number, as well as track the location of their donation en route to its destination.

Gosewich said the key is to stay in active contact with donors. The best-case scenario is that they will feel engaged in their community through routine blood contributions.

“We have to do all we can to make people aware, to, I guess, appeal to their altruism and encourage them to come in,” Gosewich said.

She recalled how the last open call for blood donors was issued in August, 2018 for the Ottawa region. Blood reserves were lower than anticipated as donors were away on vacation, but the public response was swift and widespread. “People responded, they were coming in like crazy,” Gosewich said. “It helped a lot and it gives you faith in humanity.”

Blood components must be continually replenished due to a limited shelf life, which ranges from five to seven days for platelets, to 42 days for red blood cells, and up to a year for plasma stored in the freezer.

According to Jean-Luc Cyr, crucial hospital procedures would be severely compromised without a guaranteed blood supply.

“We need people to donate regularly, year-round, to keep our operations rolling at a maximum,” said Cyr, regional manager at the Eastern Ontario Regional Laboratory Association (EORLA), a public body that manages blood bank levels at 16 hospitals in eastern Ontario. Cyr oversees blood reserves in hospitals from Deep River to CHEO and other major hospitals in Ottawa, and further east from Hawkesbury to Cornwall. “People get cancer 365 days a year, people need surgery all year long,” he said.

While Cyr considers blood inventory to be well managed, hospitals still see supply problems, often during statutory holidays. “There’s always a call-out around Christmas – ‘O-negative is down, we need more donors,’” he said, referring to the universally compatible blood type.

Cyr said that no matter what the season, patient needs come first.

“Whether it’s the summer or the deepest part of winter – those that are chronically anemic or those that are suffering from cancer in the blood products, that’s a year-round thing.”

The Montfort’s blood bank houses between 60 and 70 units of extra blood. The distribution comprises about 20 units of A-positive blood, eight A-negative, 25 O-positive, eight O-negative, four B-positive and two B-negative. There is a monthly horizon for blood supply orders — the hospital processes around 100 blood transfusions per month mainly for surgery, anemia, or cancer patients. The proportions of blood types reflect the local and regular patient populations. “We try to keep as much on hand as we have people in our community, proportionally speaking,” according to Jean-Luc Cyr of EORLA, an organization which oversees the hospital’s blood bank supply.

As in other hospitals, Montfort will enact blood contingency plans in case a blood shortage arises, so that blood is distributed efficiently under reduced capacity. With the help of five-year blood use statistics kept by EORLA, hospitals maintain inventories that reflect the blood type makeup of their local and inpatient communities.