6 days ago 0 5 min read
We use cookies to provide a personalized experience for our users. By continuing to browse this site, you give consent for cookies to be used.
Got it!
Home > News > Ottawa > Golf Wars: Kanata’s green-space feud with ClubLink hits the rough 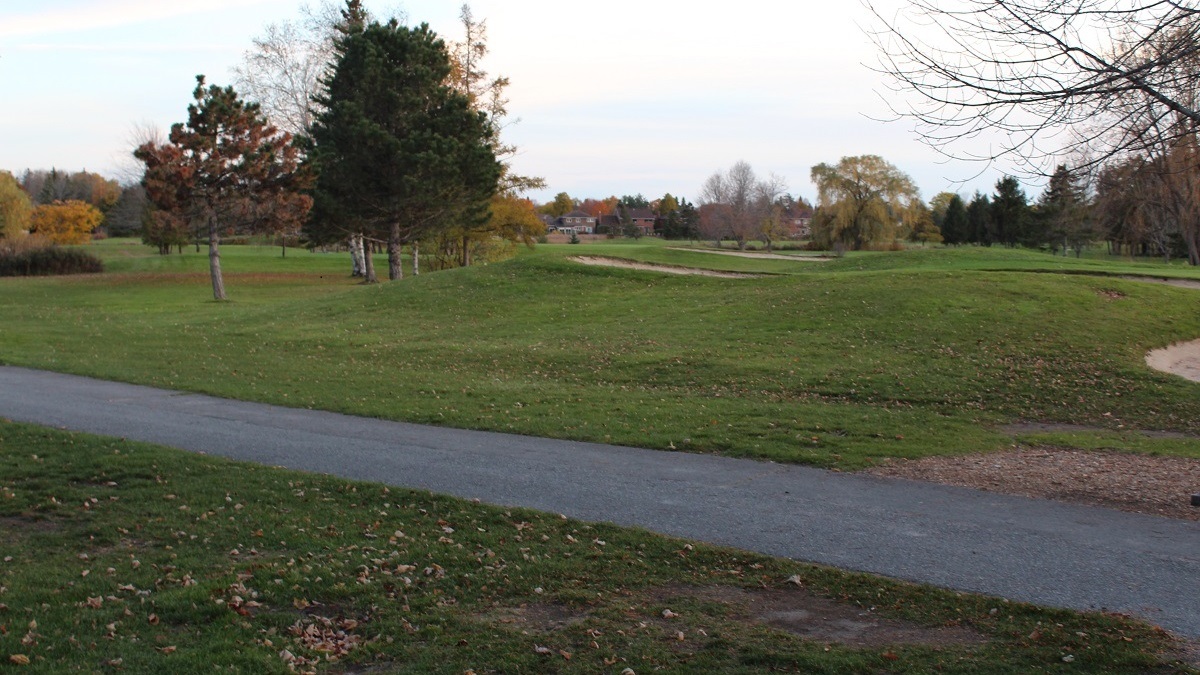 Kanata residents hope to preserve the green spaces of the Kanata Golf and Country Club and a fighting a move by the owners ClubLink to put more housing here. [Photo © Leanna Trister]
Environment

Kanata homeowners and the City of Ottawa are seeking an early day in court in their bid to block a plan to transform the Kanata Golf and Country Club into a residential neighbourhood.

The city’s application seeks to have ClubLink withdraw its building application or offer the land to the city for free. The city would like a hearing by mid-December.

Nearly a year ago,  ClubLink, one of the largest golf course operators in the country, announced it wanted to close the Kanata Golf and Country Club to make way for new housing.

In the wake of that announcement Kanata homeowners and the city united in opposition.

“We are in a war. This is an important battle in that war as the whole concept of urban preservation of green and open spaces. This particular battle is important because it is a battle of law and that’s the fight we’re pursuing,” said Barbara Ramsay, chair of the Kanata Greenspace Protection Coalition, a local non-profit organization. The Kanata group believes it can prevent the redevelopment.

The Kanata Greenspace Protection Coalition says that when ClubLink purchased the golf course in 1996, it had to sign an Assumption Agreement – which occurs when the course changes ownership. This agreement stipulated that the company must follow the provisions in previous agreements. A key clause states ClubLink cannot alter the golf course lands included in the original agreement. It must also ensure that the course’s open space “be operated in perpetuity” and that the local community be allowed to share in the use of the lands for recreational purposes.

The 1996 agreement is based on an even older one, known as the  “40 Percent Agreement.”

The idea for this agreement was developed in 1981 in response to the vision of Bill Teron, the “Father of Kanata,” who wanted to build a garden city. The plan was put together by Don Kennedy from Campeau Corp., with the purpose of ensuring the protection of 40 per cent of the area of Kanata Lakes as greenspace. It was approved by Campeau and what was then the City of Kanata. Kanata was later amalgamated into the City of Ottawa.

Under the 1981 agreement, 40 per cent of the development land in the Kanata Lakes community is designated for natural environmental spaces and parkland. Most significant is the golf course, which features 30 per cent of the greenspace located in Kanata’s Beaverbrook neighbourhood. The agreement was created because “people wanted their access to nature carved and protected in (a) document,” said Ramsay.

However, ClubLink argues it is not bound by the agreement. It wants to redevelop the land because, in addition to rising operating costs, it is threatened by declining interest and participation by golfers. According to Golf Canada, 51 golf courses shut between 2015 and 2018, 19 in Ontario. In the Ottawa area, three courses are now under threat of closure including the Kanata Golf and Country Club.

“The community and its homeowners have purchased land and invested in this community based on a commitment they understood to be true. Many of these homeowners actually have the 40 Percent Agreement registered on their land titles,” said Ramsay.

“The 40 Percent Agreement is what we understand as contract and it should be binding,” she said.

Homeowners, she says, bought properties adjacent to the golf course and paid a premium. Other homeowners brought into areas nearby believing that space would be available to them.

Ottawa Mayor Jim Watson sides with the homeowners. “[Bill Teron] had a vision and a dream and many of you original residents of Kanata bought into that dream, the green space and the ’40 Percent Agreement,’ and you paid a premium for your home and the homes are valued more and you paid more in taxes because of this agreement,” he said at a recent information meeting.

The Kanata Greenspace Protection Coalition also argues there’s no need for more housing in the area. They also argue that there is not enough infrastructure to support it.

“We do not have the infrastructure in an already developed core area of Kanata to support that kind of home structure. There are already 9,000 homes to be developed further north [the Northwestern part of Kanata North and adjacent area of the West-Carleton-March ward]. There is no indication that we need another 1,500 homes in the core of Kanata,” said Ramsay.

Preserving the golf course is also seen as a matter of public health for the community.

“The presence of green space in parks has … been shown to improve health by fostering opportunities for social connections, for providing venues for doing physical activity, and in terms of epidemiological studies, the presence of green space has been shown to be associated with lower mortality rates,” said Carleton University Prof. Paul Villeneuve, who specializes in occupational and environmental health.

“It has been shown to be associated with reduced risk of chronic diseases such as diabetes and also a number of studies have come out and shown that people who tend to live in green spaces tend to have lower rates of things like depression, and improved mental health,” he said.

Ramsay suggests that everyone in the community is on the same side of the debate.

“It matters to everyone here. There is not another community position. We are solidly behind the protection of green and open spaces,” she said.

Capital Current was unable to reach anyone from ClubLink for comment. However, Chief Executive Officer K. Rai Sahi told the Ottawa Business Journal that golf courses are not necessarily a good use of the land as fewer people are golfing all over the country.

Sahi added that the land would be used for “much-needed housing” and more useful green spaces for the community.

“I have been very well supported at city hall in working to oppose [the plan to redevelop the green space],” she said.

“The city is asking the court to order that ClubLink must either withdraw its applications under the planning act or offer to convey the golf course lands to the city at no cost … we have asked for a court date by Dec. 13th of this year.”

Sudds encouraged both the community and its neighbours to attend future public meetings and send comments regarding the applications to kanatalakes@ottawa.ca.

“We are working to support the city position to see the 40 Percent Agreement reviewed in Superior Court. That’s the next step and we are in total support of that” said Ramsay.

IN THE NEWS: Wednesday, Nov. 6