3 days ago 6 min read
We use cookies to provide a personalized experience for our users. By continuing to browse this site, you give consent for cookies to be used.
Got it!
Home > Sports > Kanata community braces for court battle over threatened green space
Business 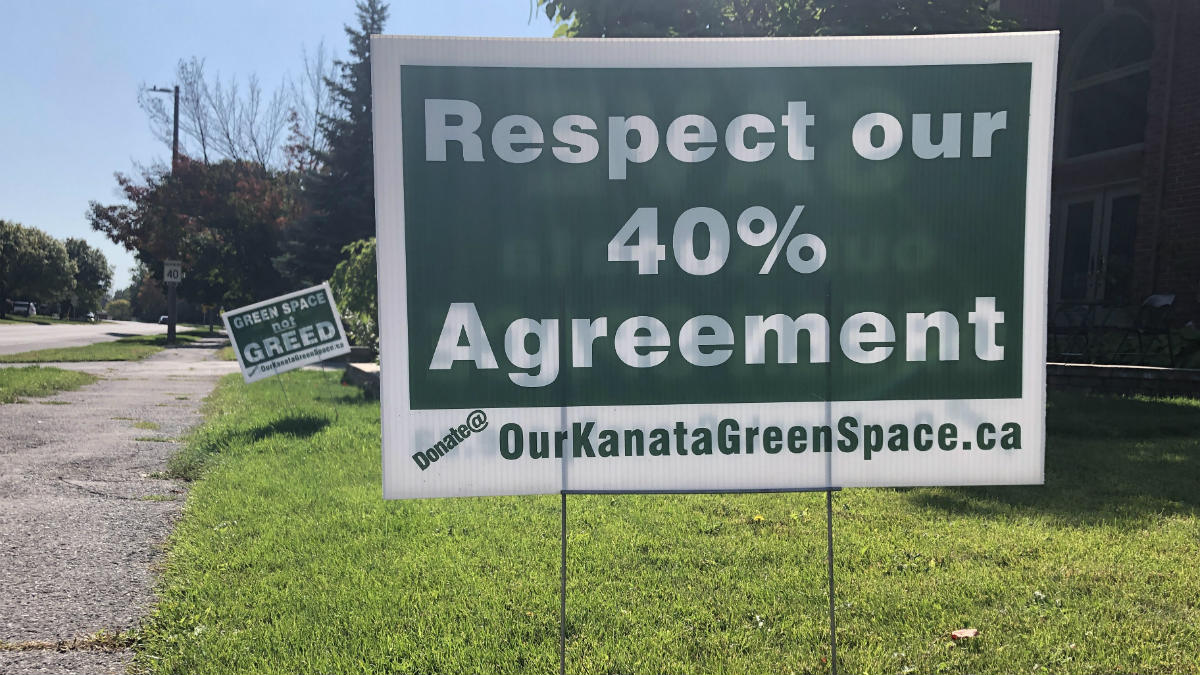 The owner of the Kanata Golf and Country Club has filed a development proposal to transform the course into a residential community, setting the stage for a legal battle with the City of Ottawa and residents of Kanata’s Beaverbrook and Kanata Lakes neighbourhoods.

A committee of residents dedicated to green space protection has formally incorporated to combat the proposed redevelopment, which the residents say would deprive locals of a cherished expanse of greenery.

ClubLink submitted a formal application to the City of Ottawa on Oct. 8 to build homes on most of the land currently used for the golf course. ClubLink is the largest owner and operator of golf courses in Canada. It is based in King City, Ontario.

The Kanata Greenspace Protection Coalition issued a press release on the same day, stating that the proposed development would allocate 53 per cent of the land to homes, 20 per cent to new roads and 27 per cent for green space, parks and ponds.

The coalition had said for months that ClubLink was poised to break a longstanding agreement to preserve at least 40 per cent of the golf course green space in the event of redevelopment.

“ClubLink and its partners Minto and Richcraft have put the ball in play today,” in KGPC chair Barbara Ramsay stated in the press release.  “The Kanata Greenspace Protection Coalition expects the City to quickly move a defence of The 40% Agreement to the courts and call the ball where it lies… out of bounds.”

Ramsay added: “The KGPC reminds ClubLink that it does have other options.  Unfortunately, the one it has taken is not in the rule book. The KGPC will work immediately and aggressively to represent our residents of Kanata North and support the City’s actions to defend the 40% Agreement.”

In December, ClubLink told the Ottawa Citizen it would continue operating the golf course during consultation, but said that it planned to pursue the redevelopment of the course while also “incorporating an appropriate amount of green space.”

The news has prompted many Kanata residents to unify to assert their rights under a 1981 40% Agreement which guarantees that a minimum of 40 per cent of the green space be preserved in perpetuity so that the community can use those natural spaces – including the golf course. The Kanata course has about 30 per cent of all green space in Kanata’s Beaverbrook neighbourhood, and the 40% Agreement states that the club’s owner must operate it as a golf course, or give the City of Ottawa the opportunity to purchase the land.

Ramsay said the goal of incorporating as a not-for-profit was to better serve the community at large as it prepares for the upcoming court battle with ClubLink.

After the City of Ottawa said in May that it would defend the 40% Agreement in court, ClubLink had been silent about its redevelopment plans until the Oct. 8 filing of the redevelopment application, which could mark the beginning of a legal battle. Capital Current made several attempts to get comment from the company, but ClubLink did not respond to the requests.

The community and several volunteer organizations have been busy preparing and reorganizing for the anticipated court fight.

“Until now, the original steering committee was just operating as a committee under the Kanata Beaverbrook Community Association,” said Ramsay. The move to incorporate will not only allow the members to undertake more fundraising, it will allow for a more focused and structured coalition as those involved prepare for the expected legal confrontation.

“Incorporation is perhaps most important to all of our members of the community who have donated so much money already to our cause,” Ramsay said. “We’ve been establishing appropriate fiduciary responsibilities to protect those investments.”

Ramsay says that over the past six months, the coalition has amassed more than 1,000 supporters and donors. Now the goal is to capitalize on that growth and continue to bring supporters into the committee.

During the months leading up to ClubLink’s application for redevelopment, streets in the Beaverbrook area became lined with green signs demanding “Respect Our 40% Agreement,” “Save Our Kanata Greenspace,” and “Green Space Not Greed.”

Mark Tremblay’s house backs onto the golf course, and he has a lawn sign in support of the cause.

“I think to a certain degree it’s an issue of perceived right and wrong. The super hero versus villain type of thing unifies people,” he said.

“We were promised this 40 per cent green space, and many of us that back onto it paid extra for it. We were told it could never go away, and now for overtly greedy reasons, it’s going to maybe go away.”

“When they built this home they built it on the golf course and would have charged a premium,” Vincent said. “And now they want to sell that land and make another profit, again, by selling that property.”

When Kanata was first proposed by developer Bill Teron in the 1960s, it was designed to be a “garden city” with large amounts of green space and a mix of commercial and residential properties. When Kanata became a part of the amalgamated City of Ottawa in 2001, the golf course remained a central part of the Beaverbrook and Kanata Lakes neighbourhoods.

Some 750 homes are near the golf course. Neil Thomson, president of the Kanata Beaverbrook Community Association, says those homes will lose roughly 15 per cent of their value and be difficult to sell because of long-term construction if the course is redeveloped for more housing.

With $150,000 in legal funds set aside by the City of Ottawa, residents expect to have the municipal government’s support if the matter goes to court. But Thomson said fundraising is still ongoing.

“I’ve had phone calls saying, ‘I’ve got two neighbours who are willing to sign a $10,000 cheque tomorrow,’ ” said Thomson. “If push comes to shove and the city decides not to pursue the case too aggressively, this community will raise funds very quickly.”

Timothy Marc, the senior legal counsel for planning and development issues for the City of Ottawa, said recently that the legal team was waiting for ClubLink to file a development application.

Meanwhile, the coalition plans to keep the community engaged with local events, newsletters and its website. Through a partnership with Ecology Ottawa, the coalition aims to create events that build awareness in the community about the importance of green space protection.

Ramsay has also previously given presentations to students on green space issues, and is eager to speak at local high schools this fall.

“That whole generation is far more wired into climate protection,” said Ramsay, “and we should make sure they are engaged on this issue, because it’s not just our issue – it’s their issue.”

“The reality is that (the ClubLink conflict) speaks to the much larger issue of urban green space and open space protection.”

“This is a battle, but it’s part of a greater war, and the war is the protection of our urban green spaces for all the reasons that we hear about on almost a daily basis,” she said.

“Whether we’re talking about mental health issues, physical health issues, the benefits of community, the opportunity for people to participate easily in things that matter to them, and to exercise. It’s all critical.”

Make sure to check out Capital Currently on our website to read daily round ups of important news from around the c… https://t.co/ANEt1mjcyr

ICYMI: Carleton University is part of a new initiative plan with the Canadian Accessibility Network to address disa… https://t.co/4q0d9zXKL7

Carleton University offers the only Certificate in Carillon Studies program in the country and Dominion Carillonneu… https://t.co/5Eu60aT9zJ