2 weeks ago 0 1 min read
We use cookies to provide a personalized experience for our users. By continuing to browse this site, you give consent for cookies to be used.
Got it!
Home > Life > Growing up meant learning to love my curly hair after years of hating it 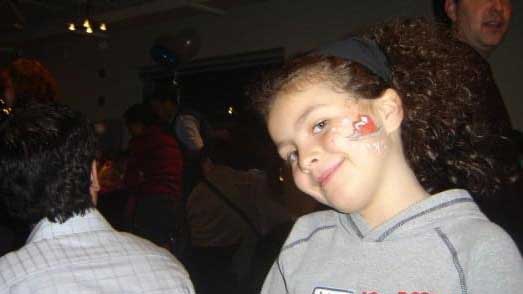 Capital Current's Maya Riachi grew up hating her curly hair. It took a thoughtful friend and a sensitive stylist to help Maya embrace her "lucky" look — and the ringlets she now loves. [Photo @ Louisa Petrocco]
Commentary

I was around six when my curly hair was straightened for the first time. It was for my sister’s first communion, and my mom thought it would be a good idea to take me to the salon with her, the day before the big event.

It would also mean one less thing for her to handle the next day, since my hair always tended to be quite a struggle.

I grew up with my parents managing my hair until I was roughly 10 because I didn’t know quite how to take care of it.

My mother would spend 20 minutes spraying my hair wet before adding some product, only for it to end up so frizzy and knotted by the end of the day that I couldn’t do anything with it. And trying to get rid of those knots was painful — not even detangling spray could help.

My father, the one I got this lovely hair from, was the opposite; he was a “let’s get this done quickly” person and would stick my head in the sink and drench it with an inordinate amount of water and product — so much so that my hair would become crisp, and it would look like the bottom of a greasy pan.

I was never happy with my hair; it was too fluffy or too greasy. It was never quite right, and its upkeep — or my parents’ upkeep of it — well, that was just unpleasant and routinely led to quarrels every time we left the house.

There are two very specific moments in my childhood that, looking back, really defined my negative relationship with my hair.

I remember an outbreak (of lice) at my school, and every kid was waiting for their turn to be inspected. … When it came to my turn, with my frizzy mess of curls, there was a look of dread on the teacher’s face.

The first one happened during elementary school, when our heads were checked for lice. I remember an outbreak at my school, and every kid was waiting for their turn to be inspected. Every class was called down one by one, and we would line up just in front of the principal’s office, where one of two teachers would check our heads. This wasn’t done privately, so everyone could hear and see what was happening. And when it came to my turn, with my frizzy mess of curls, there was a look of dread on the teacher’s face.

They started joking amongst each other trying to see if the other teacher would take me or if they should do it together, and how hard it would be to examine my head. All of this in front of my friends and other teachers.

I had never felt so humiliated and alienated, all because of my hair. I was embarrassed by it. Shortly after that, I started just keeping my hair in ponytails and buns, trying to hide it and deal with it on my own.

The second moment happened when I was prepping for a dance showcase. I was around 13 and was asked to straighten my hair so it would be easier to manage for those handling the dancers’ preparations and would better match with the others. I think I internalized that my hair was different and wasn’t very appealing, even though the dance teachers might not have been aware of their offhand comment’s hurtful impact.

After that, straightening my hair really became the norm. It made it easier for everyone, me included. When my hair was straight, I didn’t have to face the look of dread from others who would have had to deal with my curls. Curly meant pain and embarrassment; straight meant uncomplicated and normal.

By the end of high school, my hair was so damaged and thinned out from years of heat and chemicals that it didn’t look anything like it used to.

At that point, I loved having my hair straightened and would ask my mom to do it for me constantly (though she did say no quite a few times.)

Then high school hit, and so started the most damaging years — for my hair. I started off just straightening my bangs and kept my hair braided in two pigtails. Then I progressed to having all of my hair almost always straightened, which continued for years. When it wasn’t straightened, I would attempt to wear it down, but then give up and put it in a bun.

There was just no winning against it, and I had learned to love my hair straight.

When it comes to putting hair in a bun, it doesn’t cause the same damage as heat, but the pulling causes a lot of tension on the follicles and leads to hair falling out.

By the end of high school, my hair was so damaged and thinned out from years of heat and chemicals that it didn’t look anything like it used to.

Then I met this girl, the same age as me, who had the same kind of curls as me. But she embraced them, and I thought she looked stunning with them. We became friends, and she encouraged me to embrace them, too, and explained to me how she took care of her curls. That’s something no one ever did.

This became another pivotal moment when my perception of my hair changed — especially after I saw the results of the cut. My curls were back. They had life in them, and they looked like actual ringlets.

I don’t know what changed in me to make me want to embrace them. Still, I tie it back to my new friend because she encouraged me to make some changes in my hair routine and would pester me until she saw that my hair was down, in its natural curly state.

I swore off all heat. I would look at different YouTube videos and ask others for advice. I went down the rabbit hole, trying to fix all the damage I had caused.

Through this, I learned a lot about what worked with my hair and what didn’t, and it did get better, with ringlets finally revealing themselves. But the damage was still there.

It wasn’t until I went to a salon that specialized in cutting curls that I really embraced my hair as it was.

My long hair, reaching down to my lower back, was cut just above my shoulders. This was the shortest look I’d ever had, but the stylist swore it would be the only way for my hair to look healthy. So I accepted defeat and let her carry out the cut.

Throughout all this, she kept complimenting my hair and telling me how lucky I was to have it. It was the first time I’d ever really thought about being lucky. I’d always thought the worst. This became another pivotal moment when my perception of my hair changed — especially after I saw the results of the cut.

My curls were back. They had life in them, and they looked like actual ringlets. Yes, they were pouffy, but the stylist said that would die down as I grew it out. And it did.

I’ve finally learned to love my hair — curls and all.