2 weeks ago 0 1 min read
We use cookies to provide a personalized experience for our users. By continuing to browse this site, you give consent for cookies to be used.
Got it!
Home > News > Ottawa > Remembering a century-old fight for French-language rights in Ontario 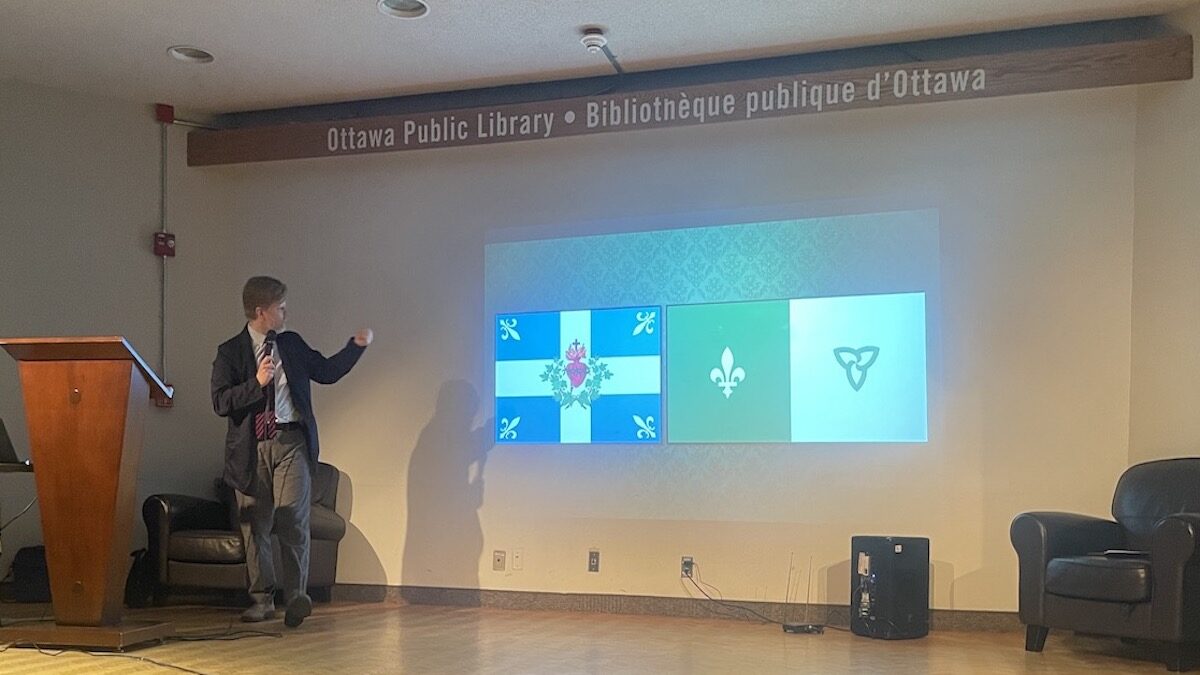 University of Ottawa historian Jean-François Lozier presenting his Historical Society of Ottawa lecture on the battle for French-language education in Ontario in the early 1900s. [Photo © Emily Putnam]
Community

A group of about 15 local residents gathered recently in the basement auditorium of the Main Branch of the Ottawa Public Library to hear about Regulation 17 and a grassroots fight to preserve the French language that took place in Ottawa more than 100 years ago.

University of Ottawa professor Jean-François Lozier, on leave from the Canadian Museum of History, told the audience about the 1916 “Battle of the Hatpins” and other events surrounding an Ontario government regulation that restricted French education in the province.

He said the story is a representation of a recurring theme in Canadian history.

‘For Franco-Ontarians, this story is part of its identity, its community, sense of self and community building.’

“This history is important to know because the story is around the great Canadian theme of accommodating demographic minorities,” said Lozier. “It’s one of the ongoing themes of Canadian history and will go on to be.”

As the Regulation 17 saga makes clear, Ontario’s francophone minority wasn’t always accommodated by the English-speaking majority. But the clash eventually led to the protection of French-language education in the province.

Designed to limit instruction in French-language Catholic separate schools, the regulation was written by Ontario’s Ministry of Education and was issued in July 1912 by the Conservative government of then-premier Sir James P. Whitney. It forbade teaching French beyond Grade 2 in all separate schools.

On Jan. 7, 1916, dozens of francophone parents fought off police who were attempting to prevent French-language instruction at Guigues School in Ottawa’s Lowertown neighbourhood. The dispute, known as the “Battle of the Hatpins” because some francophone mothers fended off police with the long pins used to secure their hats, became a symbol of the fight for French-language rights in the province.

Lozier’s Oct. 12 presentation, hosted by the Historical Society of Ottawa, was part of the group’s ongoing speaker series spotlighting significant moments in the city’s past.

The HSO, which celebrated its 125th anniversary in 2022, aims to increase local awareness of the history of Ottawa and the surrounding region through meetings, tours, awards, publications and sponsored research.

‘There are these amazing stories that are so well known to francophones that we anglophones have just been completely ignorant to.’

Ben Weiss, the HSO’s speaker series coordinator, says the events aim to create a space for local citizens to learn the stories of their city that they may not have been taught in school.

“One of our goals has been to diversify our history, but another goal has been to tell more women’s stories and to have more women speakers,” said Weiss.

He said the ‘Hatpins and Defiance’ event helped unite anglophone and francophone communities.

“There are these amazing stories that are so well known to francophones that we anglophones have just been completely ignorant to,” he said.

The early 20th-century battle to protect the French language and culture in Ontario is commemorated in the name of a Franco-Ontarian rock band.

Règlement 17 (R17), a self-described “alternative rock band that seeks to democratize rock,” uses their music to be “agents of change” within their community.

Since forming in 2009, they’ve released several albums and EPs while fostering a francophone community at educational music events such as Quand ça nous chante.

Kevin Daoust, guitarist/composer for R17 and a Carleton University graduate in 2003, said the band aims to show students that music can be enjoyed regardless of the language it’s delivered in.

“Its always nice to see the kids get into the music,” said Daoust, “Even in francophone schools, like it or not, kids these days are bombarded with anglophone culture.”

Despite this, he said, within the past few years he’s noticed a rise in francophone students getting involved in cultural projects such as podcasts and Youtube channels.

“The kids who were students in high school a few years ago are now starting their own slice of culture,” said Daoust. “We’re starting to see the next generation is starting to bring that up.”

Regarding his talk on Regulation 17 and the fight for French-language rights, Lozier said: “It’s a privilege to have the opportunity to discover a history such as this one.”