4 days ago 0 4 min read
We use cookies to provide a personalized experience for our users. By continuing to browse this site, you give consent for cookies to be used.
Got it!
Home > News > Canada > In Focus: Ottawa marks end of Elizabethan era, pays tribute to revered, dutiful monarch 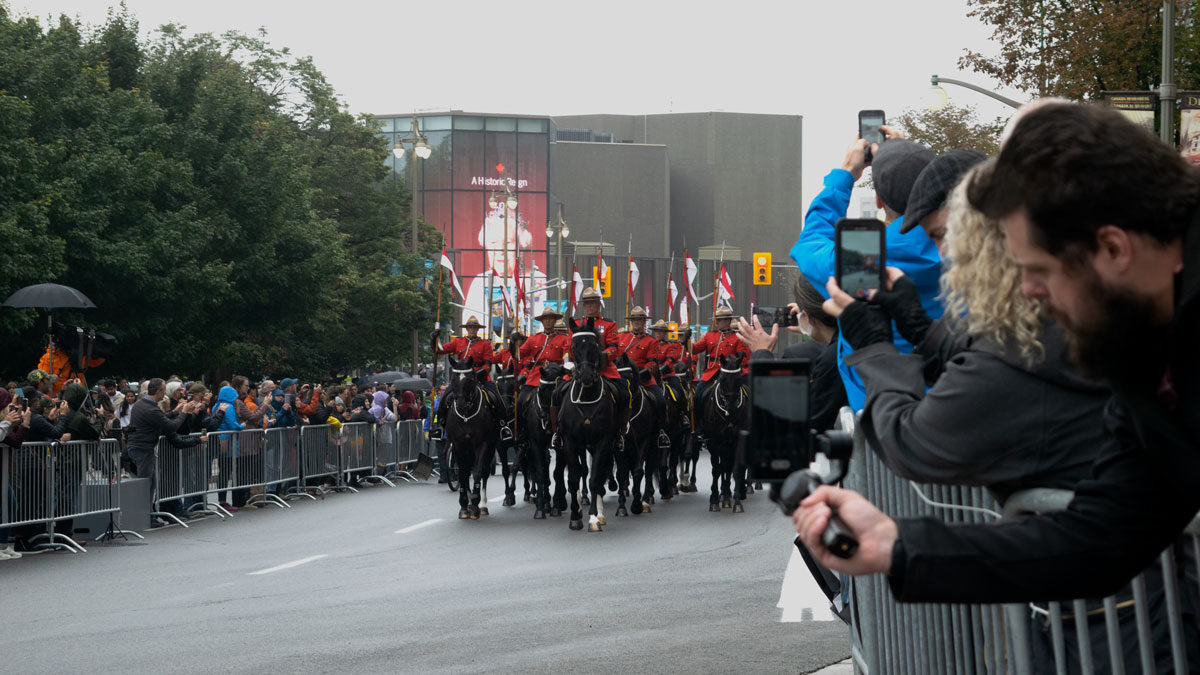 Ottawa paid tribute to the late Queen Elizabeth on the national day of mourning Sept. 19. From the Cartier Square Drill Hall to Christ Church Cathedral, members of the Royal Canadian Mounted Police rode through the streets of downtown Ottawa, and the band of the Canadian Armed Forces played a mournful composition. Memorialized behind the RCMP's raised Canadian flags is an image of Queen Elizabeth II, screened on the Kipnes Lantern of the National Arts Centre. [Photo © Maya Blumenfeld]
Canada

The world held its breath as doctors at Buckingham Palace announced their concern for Queen Elizabeth II’s health on Sept. 8. Once her death was announced hours later, at around 1:30 p.m. that day, the passing of a monarch who had reigned for more than 70 years drew reactions from within the United Kingdom and far beyond — including Canada.

By the end of her 96 years, the late Queen had been witness and high-profile player on the world scene for longer than most Canadians had been alive — a revolving door of changes, triumphs, and controversies across seven decades on the throne. Though she was a symbol of colonialism for many, others viewed her as an embodiment of traditional British values, supporting her long reign.

While those across the Atlantic Ocean waited in an eight-kilometre-long line to express their condolences ahead of the Queen’s state funeral on Sept. 19, crowds in downtown Ottawa lined Elgin and Wellington streets to watch a commemorative procession. The day’s events continued inside Christ Church Cathedral, the procession’s final destination, where an invitation-only ceremony took place and featured speakers such as former prime minister Brian Mulroney and former governor-general Adrienne Clarkson. To conclude Ontario’s provincial period of mourning, a 96-gun salute ensued, with a volley fired every 10 seconds for every year of the Queen’s life.