4 days ago 2 min read
We use cookies to provide a personalized experience for our users. By continuing to browse this site, you give consent for cookies to be used.
Got it!
Home > Sports > Is Ottawa losing its chill? Winter sports feel burn of climate change 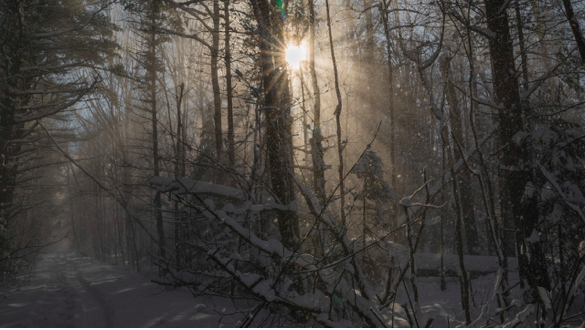 This ski trail might not be around in the future if the climate continues to warm. [Photo @ Anthony Walsh]
Sports

Ice sculptures glinting in the sun. Crimson-red Mounties guarding the Peace Tower. The rasping of skate blades on the ice as you make your way down the Rideau Canal toward the Chateau Laurier. These are some of the images that come to mind when you think of Ottawa in the winter.

But Ottawa, along with the rest of the world, is undergoing a profound transformation. Warming, more unpredictable weather brings milder winters, more precipitation and (gasp) less hockey. That’s right: climate change is taking its toll on the natural world, and those who work and play in the outdoors are already feeling the burn — especially in the nation’s capital, where winter is a quintessential part of the city’s identity and of its economy.

Freddy Allport is on the front lines of Ottawa’s battle to survive as a winter sports destination. The manager of Kunstadt Sports on Bank Street says he has seen the direct impact a shorter, rainier winter can have on his bottom line:

“Our recreational [ski] products take a huge hit, especially if we don’t get snow before Christmas,” says Allport. More than 70 per cent of the store’s annual business comes from ski sales in a three-month window, he says. If Ottawa doesn’t receive a dump of snow by Christmas, sales take a massive hit, he says.

“The reality is winter is our biggest business.”

It’s also big business for the city. Each year, 11 million visitors contribute more than $2.2 billion to the local economy. Almost a million of those visitors come to experience the Rideau Canal Skateway, a number which may falter if Ottawa loses its signature winter chill. The city’s Winterlude festival hosts an average of 600,000 participants each year, relying on a frozen canal for its biggest activities. Other winter sports, such as downhill skiing, are major attractions. One of the area’s largest ski resorts, Camp Fortune, attracts as many as 150,000 skiers and snowboarders in a good season.

But temperatures are expected to rise by 3C in the nation’s capital between now and 2080, according to a report by the Winnipeg-based Prairie Climate Centre. That’s the difference between a powder day at Camp Fortune and a rainstorm closing the Rideau Canal for the season.

The 2019-20 season marked the first time the canal did not fully open on any of this year’s 31-day season, according to CTV Ottawa. As for skiing, average season lengths for Ontario resorts will be reduced by up to 21 per cent by 2050, according to a recent study by Daniel Scott, the director of the University of Waterloo’s Master of Climate Change program. For outdoor businesses and enthusiasts around Ottawa, this may spell disaster.

The city is well aware of the impact of climate change. In April 2019, council declared a climate emergency. In 2019 the department of planning, infrastructure, and economic development published a report on climate adaptation and resiliency to prepare for the worst.

The report stressed the urgency of climate change preparations and outlined the turmoil climate change might cause for the city. For example, despite the trend of warming winters and decreased yearly snowfall, February 2016 shattered snowfall records by dropping 51 cm in a single day. Then, in July 2018, 10 days of scorching heat and biblical rainfall submerged several parts of Ottawa.

As city planners brace for more climate turbulence, businesses and event organizers are scrambling to adapt to shorter, milder winters. Some have already taken significant steps to mitigate the impact of climate change.

The Rideau Canal Skateway is a case in point. Fifty years ago, when the Skateway first opened, the National Capital Commission (NCC) simply waited for the water to freeze before allowing skaters on the ice until the beginning of March. But it is a different story these days.

Cédric Pelletier, a communications advisor with the NCC, says mechanical assistance is now critical in ensuring the Skateway opens each season. Despite this investment, data from the NCC in 2019 shows the Skateway opens an average of three weeks later than in the 1970s. Irregular temperatures have forced the NCC to adapt and re-think its design. Pelletier says the NCC now pumps water underneath the surface to help thicken the ice. The agency has also implemented a unique channel system to divert warm city water away from the shallowest points of the canal.

Bruce Devine, the senior manager of the canal, adds that for the last 12 years the NCC has hired an engineering consultant to analyze ice thickness throughout the season and develop techniques to build it faster.

“We noticed that by putting a lot of water on the snow, the snow acts like a sponge. It compacts so hard that it’s as good as natural ice.” These days, the NCC waters any fallen snow on the canal in an effort to open the Skateway as quickly as possible.

Winterlude organizers have also been adapting the festival in response to a shorter, more unpredictable season. Julia Thompson, a spokesperson for Ottawa Tourism, says this year’s festival had an unprecedented urban focus, with organizers shifting many events away from the Skateway and onto Bank and Sparks Street downtown. Winterlude’s annual ice carving competition, traditionally held in Confederation Park, was held on Sparks Street this year. The 2SLGBTQ+ event WinterPride featured mainly warm-weather friendly events, such as indoor art exhibits and crafting.

But climate change does more than disappoint skaters and melt out winter festivals. It can be disastrous for people working in the outdoor industry too.

Jonathan Urness, a seasonal ice climbing guide who has wintered in Ottawa for the last 12 years, says he has seen first-hand the impact of climate change on ice climbing in the area. Waterfall ice is ephemeral at the best of times.

With sudden shifts in temperatures, conditions quickly become perilous for ice-climbing. Urness guides ice climbers an average of 40 days per season, but that number can nosedive quickly depending on what Mother Nature serves up. Guides are then forced to either cancel or reschedule their bookings, creating a backlog by the end of the year. When the winter climbing season is cut short by warm weather, guides have to reimburse their waitlisted clientele — effectively giving away days, or weeks, of salary.

At Kunstadt Sports, Allport says the shop has had to rethink its buying philosophy as it can no longer count on regular snowfall in the three months when they make most of their sales. Store managers now hesitate to buy in bulk, because if a warm spell comes to town, the shop will be sitting on boxes of unwanted product. As a result, prices have risen slightly, he says.

“We are so reliant on a community of skiers and people who enjoy winter sports, he says. “If the winters keep getting worse, people are less willing to invest money in the sport.”

COVID-19: A guide to social distancing and self-isolation

IN THE NEWS: Wednesday, March 18

This year marks the 100th anniversary of the first exhibition by Canada's most famous contribution to the art world… https://t.co/0KdZ22u9SJ

Physical distancing due to the pandemic have resulted in a spike in overdoses nationally. According to drug policy… https://t.co/NQzPUM9sTV